Op-ed:
Have the Facebook Spies Been Caught?
By: Diane Sori / The Patriot Factor / Right Side Patriots 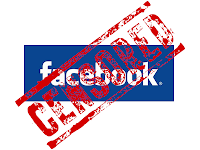 As many of you know I have been in facebook jail more times than I care to remember and all the times were simply for telling the truth about an administration and/or a candidate run amok. Being in fb jail was one of the reasons I started this blog, and you can read about that here: 'A Blogger is Born' at: http://thepatriotfactor.blogspot.com/2012/04/blogger-is-born-well-here-i-am-guys.html

My most recent 30-day banning occurred last November and I was 'paroled' right before Christmas, and all the brouhaha was for calling Hillary a "socialist, lying, islamic-condoning, murdering (Benghazi) traitor"...words many know to be true. But who reported me to the 'facebook gods' remained the question that until just a few days ago went unanswered...that is until another facebook 'parolee' posted that if you go to your facebook settings, go to 'blocking,' and then type in 'Facebook Security,' that you will see a list of names who could be the culprits. Then try 'blocking' them and see what happens...some you can and some you cannot, and those that remain seem to the ones many of us have in common.

Well, I did just that and below is the post I made on facebook early this morning. Needless to say, this affects all who use facebook, but some of us are 'targeted,' if you will, for special scrutiny...me and my RIGHT SIDE PATRIOTS partner Craig Andresen are but two of a 'special' few.

Below is the post and a larger screen captured shot of my 'spies'...it would be interesting to see just how many of them we all have in common...which would indeed be an 'aha' moment as none of these people are facebook friends or even followers. It will also be interesting to see if this below post of mine gets taken down by the 'facebook gods' because if they do take it down we would then have proof positive that facebook is targeting and censoring conservatives and conservatives alone. And I do have the original shots stored away for safe keeping where even the 'facebook gods' cannot get to them.

"Very interesting...if you go to your FB settings, then over on the left side, go to "blocking" and type in "facebook security" you'll get a long list of names. Try blocking those on the list. Some you can...others you cannot. What's left...those you cannot block...these could very well be the FB spies who are watching Conservatives and tossing us into the infamous FB jail. These photos are of the people FB would NOT allow me to block...probably the very folks who are spying, reporting, and getting certain of my posts censored resulting in yet another stay in FB jail. If you go to Craig Andresen's (my RIGHT SIDE PATRIOTS partner) wall you will see he has most of the same people that I have...coincidence...I think NOT."

And, as you delete your spies the very next day the 'facebook gods' add new ones to take their place...nice huh. Welcome to the facebook dictatorship. 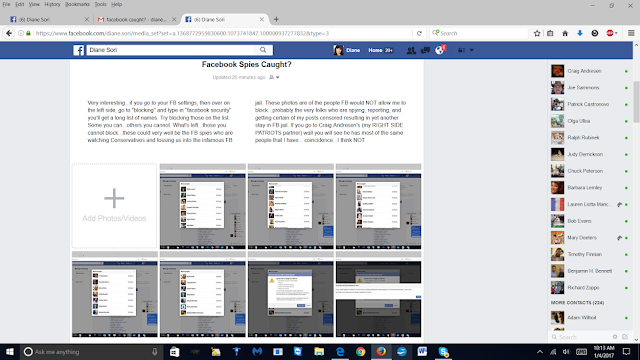 Barack Obama is set to meet with Senate Democrats on Wednesday as he tries to salvage his coveted Obamacare policy.

However, one Senate Democrat will not be attendance for those meetings.  Sen. Joe Manchin of West Virginia said that in good conscience, he cannot meet with Obama.

"In good conscience, I can't do it," Manchin said Wednesday on MNSBC's "Morning Joe."

"If anyone listened and paid attention to what the American people said when they voted, they want this place to work. Can you imagine in here ... we have the outgoing president coming up here today to talk to only Democrats. We have the incoming vice president coming up to talk only to Republicans."

"And that's really what's wrong with the place," he said. "I just think it's absolutely wrong."

Read entire article and see video here: http://townhall.com/tipsheet/justinholcomb/2017/01/04/democratic-senator-refuses-to-meet-with-obama-in-wednesday-morning-meeting-n2267054
Posted by Diane Sori at 10:59 AM No comments:

Email ThisBlogThis!Share to TwitterShare to FacebookShare to Pinterest
Bill introduced to move U.S. embassy to Jerusalem

In December, “Israeli Ambassador to the U.S. Ron Dermer endorsed President-elect Trump’s proposal to move the U.S. embassy in Israel from Tel Aviv to Jerusalem.”

Now, following Obama’s betrayal of Israel in his refusal to veto UN Resolution 2334, three Senators have introduced the “Jerusalem Embassy and Recognition Act, which would move the U.S. Embassy […]

Donald Trump isn’t even President yet, but his campaign promises are coming true and he’s already saving U.S. jobs.

On Tuesday, Ford Motor Co announced that it will cancel its  $1.6 billion planned factory in Mexico.

Instead of the plant, Ford Motor Co will invest $700 million at a Michigan factory, which will add 700 U.S. jobs.

When Ford announced its earlier plan to move the production of all small cars to Mexico, Donald Trump fired back, vowing to not let Ford take away American jobs.


“When that [Ford] car comes back across the border into our country that now comes in free, we’re gonna charge them a 35% tax. And you know what’s gonna happen, they’re never going to leave,” said Trump.

However, Ford Chief Executive Mark Fields said the decision to cancel the Mexican plan had nothing to do with Donald Trump’s remarks.

Read entire article here: http://pamelageller.com/2017/01/trump-effect-ford-cancels-1-6-billion-mexican-plant.html/
Posted by Diane Sori at 10:29 AM No comments:

For those who missed...or just want to hear it again...tonight's RIGHT SIDE PATRIOTS broadcast, 'Standing for Israel...A Special Report,' with our very special guest Mudar Zahran, Secretary General of the Jordanian Coalition of Opposition, it will be repeated tonight at midnight and throughout the week on American Political Radio at: bit.ly/2cpXuR[

Or you can listen to it on the cloud at your convenience at: https://soundcloud.com/right-side-patriots-260798913
Posted by Diane Sori at 12:00 AM No comments: