Pompeo: U.S. to Implement ‘Strongest Sanctions in History’ Against Iran

Secretary of State Mike Pompeo said Monday that Washington would impose the “strongest sanctions in history” on Iran if the regime does not comply with a list of U.S. demands intended to bolster nuclear non-proliferation verification measures.

Pompeo, speaking at the Heritage Foundation in Washington, laid out a “diplomatic road map” for further relations with Iran in the wake of the U.S. withdrawal from the 2015 nuclear deal.

The former CIA director laid out a comprehensive list of requirements that Iran must comply with to avoid the painful sanctions, including the declaration of all nuclear material to the International Atomic Energy Association (IAEA), the allowance of unqualified IAEA access to all nuclear sites, the conclusion of missile development, and the release of all American hostages.

Trump withdrew from the Iran deal earlier this month, citing the lack of adequate compliance verification, as well as Iran’s increasingly aggressive regional influence campaign, as evidence of the Obama administration’s failure to secure a favorable deal.

Read entire article here: https://www.nationalreview.com/news/mike-pompeo-iran-strongest-sanctions-us-history-coming/
Posted by Diane Sori at 10:05 AM No comments: 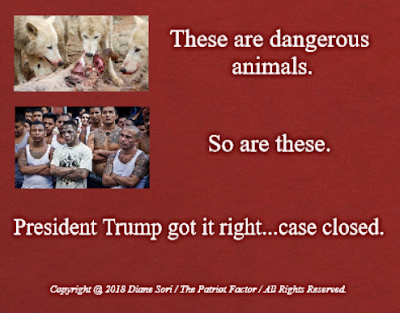 The Department of Justice said Sunday its inspector general will investigate whether the FBI engaged in politically motivated surveillance of President Donald Trump’s presidential campaign in 2016 following a public demand by Trump to do so, the Washington Examiner reported Sunday.
"The Department has asked the Inspector General to expand the ongoing review of the FISA application process to include determining whether there was any impropriety or political motivation in how the FBI conducted its counterintelligence investigation of persons suspected of involvement with the Russian agents who interfered in the 2016 presidential election,” Justice Department spokeswoman Sarah Isgur Flores said in a statement.

"As always," Flores said, "the Inspector General will consult with the appropriate U.S. Attorney if there is any evidence of potential criminal conduct."

Deputy Attorney General Rod Rosenstein made the request for the DOJ IG to intervene.

Email ThisBlogThis!Share to TwitterShare to FacebookShare to Pinterest
Theresa May announces the end of free speech in UK: “We value free speech…we also value tolerance to others”

UK: At last someone asked Theresa May the right questions on freedom of speech in the British Parliament. pic.twitter.com/GFFl88PM0w — Onlinemagazin (@OnlineMagazin) May 19, 2018 Challenged in Parliament about why criticism of Christianity is taken for granted while criticism of Islam embroils one in societal (and legal) difficulties, British Prime Minister Theresa May answered: […]
Read in browser »

Because it’s all about the Jew-hatred.

There have been intermittent attempts to get the ISIS fighters to leave, but it’s not entirely clear where they would go.

Amid scenes labeled “apocalyptic” and a “crime against humanity,” the Syrian regime continued its offensive on Sunday to retake the Palestinian refugee camp of Yarmouk, a neighborhood in south Damascus.

Most of the area is held by Islamic State and tens of thousands of Palestinian residents fled years ago, but thousands remain under a brutal siege.

The scenes from Yarmouk on Sunday looked like Stalingrad in 1942 or Berlin in 1945, during the Second World War: bombed-out buildings as far as the eye can see; roads turned to rubble; alleyways turned into canyons of destruction, gutted, gray and slumping from air strikes. There doesn’t appear to be anything left of many city blocks that were once a thriving community, the home of more than 200,000 people in 2011 when the Syrian civil war broke out. Now only a few thousand remain. Those who do are reported to be starving under the regime’s siege.

Welcome to Fox News First. Not signed up yet? Click here.
Developing now, Monday, May 21, 2018