The flood of refugees from Syria and other Middle East countries that the Obama Administration is preparing to distribute to communities across the nation raises very real and understandable security concerns among government officials at the state and local levels, and among the citizenry generally.  It is, of course, facile for President Obama to proclaim piously that he "is not a afraid."  With the full protection of the U.S. Secret Service, the armed forces, and every law enforcement agency in the country protecting him, why should he fret?  The rest of us are not quite so lucky.

Whether we, or any nation, has any moral obligation to throw open its doors and accept tens of thousands of Syrian and other Middle Eastern refugees at this (or any) juncture, and whether it is fiscally prudent for us to do so when we already are drowning in entitlement spending, are questions worthy of vigorous political debate.

In many respects, however, as important as are the security and fiscal concerns that accompany a plan to bring in tens of thousands of refugees from suspect nations and backgrounds, are the fundamental legal and constitutional questions that arise when the federal government imperiously claims absolute power to bring into the country whoever it wants and place them in whatever communities it wants, regardless of whether those states and counties want or can afford to maintain them.  This is why so many governors have declared their states will not be a party to such irresponsibility.  The federalism question underlying such concerns is why the Administration's actions and threats should be challenged in court.

Obamacare Troubles a Gift to 2016 Candidates

There have been many articles in the last year with some variation of the headline "GOP Surrenders on Obamacare." The stories mostly concern a tendency among some Republican policy elites to adopt the Washington conventional wisdom that Obamacare cannot be repealed because it has already become deeply entrenched in American life.

Those Republicans might want to reconsider. A series of developments in recent days suggests the Affordable Care Act is in perilous condition and could become even more troubled in months to come.

UnitedHealth, the nation's largest health care company, recently announced huge losses from the sale of Obamacare plans and threatened to pull out of the exchanges altogether. "We cannot sustain these losses," CEO Stephen Hemsley said. "We can't really subsidize a marketplace that doesn't appear at the moment to be sustaining itself."

The news came on top of weeks of reports of rising costs for consumers. "Insurers have raised premiums steeply for the most popular plans at the same time they have boosted out-of-pocket costs such as deductibles, copays and coinsurance in many of their offerings," The Wall Street Journal reported.

Over at PJ Media today I discuss CNN “journalist” Christiane Amanpour’s manifest bias and hypocrisy: CNN’s Christiane Amanpour believes “we can all afford to be human” regarding the Syrian refugees. Recently, she condemned the U.S. and other countries for not letting them enter the homeland, despite FBI Director James Comey’s testimony explaining that vetting this population is […]

Further proof that groups like the ACLU have long outlived their usefulness and have now become weaponized by the enemies of freedom.

The American Civil Liberties Union has launched a lawsuit against Gov. Mike Pence, R-Indiana, accusing the chief executive of violating the Constitution by blocking Syrian refugees from his state.

“This lawsuit is calling out Governor Pence on his unconstitutional bluff,” said Judy Rabinovitz, deputy legal director of the ACLU’s immigrants’ rights project, in a press release. “He does not have the power to pick and choose between which lawfully admitted refugees he is willing to accept. Singling out...

Today, Wednesday, November 25th on RIGHT SIDE PATRIOTS on CPR Worldwide Media from 2 to 4pm EST, Craig Andresen and Diane Sori welcome their special guest, Secretary General of the Jordanian Coalition of Opposition Mudar Zahran, and discussed will be all things Syria, Jordan, Putin, and Obama.

As CPR is undergoing server maintenance please click on the link below...it will take you to the external music player with which RIGHT SIDE PATRIOTS is run through.

And chat with us live during the show at:
https://www.facebook.com/groups/cprworldwidemedia/ 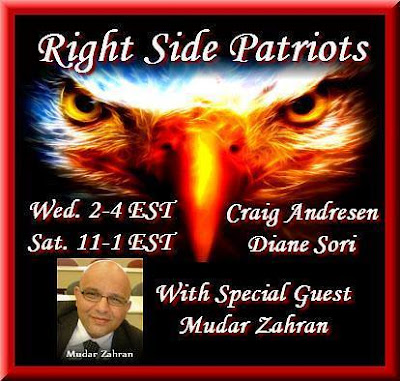