Sessions' statements were aimed at a dozens of cities and other local governments, including New York, Los Angeles and Chicago, that have joined a growing "sanctuary" movement aimed at shielding illegal immigrants from stepped-up deportation efforts.

Police agencies in those jurisdictions have barred their officers from routinely checking on immigration status when making arrests or traffic stops. And they have refused to lock up individuals longer than otherwise warranted at the request of federal agents seeking to deport them.
Trump administration officials says the deportation crackdown is focused on illegal immigrants convicted of serious crimes. They insist public safety is jeopardized when police refuse to notify U.S. Immigration and Customs Enforcement of plans to release such a person from local custody.

"Failure to deport aliens who are convicted of criminal offenses puts whole communities at risk, especially immigrant communities in the very sanctuary jurisdictions that seek to protect the perpetrators," Sessions said at a White House news briefing.

“‘As you can see, the assignment was in no way an attempt to diminish the tragic events of September 11, 2001. Nor was it designed to support the goals of Al-Qaeda and other terrorist organizations,’ said Rob Schweers, ISU’s director of communications… ’This is similar to the vital work being performed in our nation’s diplomatic and […]

Well, isn’t this a pot calling the kettle black moment: John Podesta, mouthpiece for the Democrats — the very same Democrats who are always pointing to supposed business-related and Russia-tied conflicts of interests of President Donald Trump — may have a disclosure problem.

Podesta, former Secretary of State Hillary Clinton’s 2016 national campaign chairman, failed to disclose the receipt of 75,000 shares of stock of a Russia-financed company, the Daily Caller reported. He should’ve disclosed the financial interest in 2014, when he came aboard the White House staff.

And that’s a problem — which could very well turn into a federal law violation.

From the Daily Caller:


“Joule Unlimited Technologies — financed in part by a Russian firm — originally awarded Podesta 100,000 shares of stock options when in 2010 he joined that board along with its Dutch-based entities: Joule Global Holdings, BV and the Stichting Joule Global Foundation.


Today, Tuesday, March 28th from 7 to 9pm EST on American Political Radio, RIGHT SIDE PATRIOTS Craig Andresen and Diane Sori discuss Losing the War Because of Numbers Uncounted, Exploring Liberals Utter Lack of Fundamental Principles, and important news of the week.
Hope you can tune in at: http://bit.ly/2cpXuRd
Posted by Diane Sori at 2:28 AM No comments:

Losing the War Because of Numbers Uncounted
By: Diane Sori / The Patriot Factor / Right Side Patriots on American Political Radio 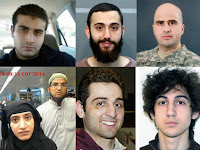 Fort Hood, Boston, San Bernardino, Orlando, Tel Aviv, Paris, Brussels, and now London...just to name but a few. And just what do these locals have in common...all have seen carnage, death, and destruction that is the stuff of our worst nightmares perpetrated by the followers of islam... by radical muslims...whether they be homegrown converts or by birth.

Not a Christian or Jew amongst these vile sorts and yet many in our Judeo-Christian nation still refuse to see the simple truth that some truly do not deserve to walk the Earth with civilized men. And some still insist on calling islam a religion and others go even further and call islam a religion of peace. But know that islam is not about peace as the words of their very own most (un)holy of books...the qur’an...says and proves just that.

And while it was a given that the liberal left would oppose President Trump's travel ban...a ban that would at least temporarily keep the enemy ‘over there’ instead of us laying out the welcome mat for the enemy to come here... sadly some even on the right oppose it as well for they hope that some way somehow we can peacefully live side-by-side together with those wishing us dead. But what these folks forget is the simple fact that the civilized man can never exist in peace alongside those whose vision of peace is subjugation, submission, and of America becoming part of the ever expanding caliphate.

So as we watch Europe being overrun by strong healthy young muslim men...with hardly a woman or child amongst them...as we watch Europe fall to the vanguard of the ultimate invasion that will have Europe becoming the 58th state of the caliphate...here is a little something you need to think about...the caliphate will be gotten both in Europe and here in America by sheer numbers alone with very few shots needing to be fired and without our streets here in America turning red with our American blood.

How so...muslims will simply outnumber us and will do so while we remain in a collective media-driven ‘sleep’ of sorts.

And unless we wake-up to this harsh reality our future will be a future decided by simple math. And the numbers involved are truly staggering...numbers seeming to start small but while we remain sleeping turn into numbers that increase more than two-fold with each generation. In fact, a recent Pew Research Center study...a study done over six years using data from 2,500 censuses and surveys... found that by the middle of this century there will be about 2.8 billion muslims worldwide up from 1.6 billion today. And with islam now being the world’s second-largest religion after Christianity, the numbers say that by 2070 muslims will outnumber Christians worldwide.

Now to further complicate matters, those numbers also show that by 2050, or maybe even a bit sooner, muslims will make up a full 10% of Europe’s total population, as the region's Christian population will fall from the current 553 million to 454 million. And by 2050 here in the U.S., Christians will decline from more than three-quarters of the current population to just two-thirds in 2050, with muslims outnumbering Jews to become our country’s largest non-Christian group with the number of muslims in America being projected to more than double from today's 2.6 million to 6.2 million...with some projecting that number to be as high as 8.1 million...thus making up 2.1% (or more) of our total population. And that number is based upon the number of muslims currently living here and does not at this point include the number of muslims expected to flood our country over the next couple of years...unless we can stop it that is.

Are you starting to wake-up yet?

And still you ask how can this possibly be...how can this happen...again it is simple math...one just has to add up the numbers. Add up that muslim men under the sharia are allowed to have four wives (and most muslims in this country do follow the sharia no matter the media claiming otherwise)...and many even have what is referred to as additional 'temporary' wives to 'use' at their discretion (prostitutes actually)...and with each wife usually having 4, 5, 6, or more children...simple math dictates that in just twenty years time there will be enough muslims of voting age here in the U.S...and in the U.K. Canada, and Australia as well...to be able to elect our leaders by their sheer numbers alone, especially if there is a candidate that is one of their own. And know that we having more children is not the answer no matter what some of our religious leaders say...for having more children that one can ill afford never is.

So what is the answer...it is simple really...we must stop 'them' from ever coming here.

Sadly, it has indeed come to just that and like I said it has happened while we have been in the above stated collective 'sleep' as to what our future holds...as well as we being ignorant of or just foolishly choosing to ignore past presidential actions...for President Donald Trump is not the first president to place a ban against a specific immigrant group nor will he be the last.

Hopefully you can now see that besides the all-important afore mentioned numbers, precedence has already been set for denying entry into our country those we deem to be hostile...and in this case those rightfully so deemed are muslims...muslims hostile to both our way of life and to the Constitution...the very rule of law we are governed by. And really, why should we take in those who show no interest in assimilating into the fabric of our American society...who show no interest in becoming true red, white, and blue Americans...but who instead want to bend us into submission to ways, ideals, and values so reprehensible to not only our Judeo-Christian faiths, thinking, and beliefs, but to what we know is simple right vs. wrong.

Simple right vs. wrong itself shows the followers of islam to be a threat to the security of our country for all one has to do is open a history book or read the qur’an to see that islam’s followers cannot nor do they want to live amongst us, that is unless they have the upper hand...the controlling hand...something Europe sees happening in real time as muslim invaders...in the guise of calling themselves refugees...rape, kill, and plunder their way through Europe...and we are next on their agenda.

And know that the sharia... the very law islam demands... the very law muslims deem to be higher than that of our Constitution...also shows that islam’s followers...followers who are roughly 1400 years behind the West’s becoming more just and civilized...followers who still condone jihad, torture, pedophilia, child marriages, treating women as mere chattel...just to name a few...proves they just do not now nor will they ever fit into our American society for how can they when they deem life and liberty below their desire for 72 virgins in death.

And as for most of those (obviously not all) who say they have either converted to Christianity or who are more 'moderate' in their views...remember the word taqiyya...the islamic juridical term whose meaning relates to when a muslim is both encouraged and allowed, under sharia law, to lie to help achieve the goal of islamic conquest.

But shouldn’t common sense itself dictate that since most, if not almost all, terrorist attacks over the past decade or so have been perpetrated by muslims. Remember back to my opening line...Fort Hood, Boston, San Bernardino, Orlando, Tel Aviv, Paris, Brussels, and now London...just a few of the attacks done by muslims...attacks committed in the name of islam and allah...attacks as a dry run leading up to what will surely be a major attack again happening here on American soil...an attack that will have 9/11 paling in comparison.

It is coming and probably soon for lone wolves are being awoken by those whose commands they follow...lone wolves as in terrorist themselves...lone wolves arriving on our shores who will breed like animals with the sole purpose of increasing muslim numbers.

And back it comes full-circle to numbers...ever increasing muslim numbers...numbers being the determining factor in who will be the final victor in the war of clashing civilizations. And sadly it seems that victor will not be us for how can we win that war when we openly allow the enemy into our country...when we allow the enemy to set foot on our shores...when we know that it is legal to ban that enemy as precedence and standing has already been set yet we do not.

And so America will indeed lose the war to numbers...numbers we could have easily stopped but did not, and all because we caved to the god of political correctness known as the kumbaya liberal left. May God our Father forgive us for what we have done...or should I say for what we have not done.