The Hillary Treatment for Climate Fraudsters?

This past March, 17 attorneys general launched a coordinated effort to investigate, pursue and prosecute companies, think tanks and other organizations that say there is little credible evidence that human “greenhouse gas” emissions are causing “dangerous” or “catastrophic” manmade climate change.

The AGs said their targets’ actions constitute “fraud” – which they described as using “polished public relations campaigns” to “muddle the truth,” “discredit prevailing climate science,” and “mislead” people about threats from higher temperatures, rising seas, floods and more severe weather. Their real goal is to intimidate and silence targeted groups, and bankrupt them with legal fees, court costs and lost funding.

The Competitive Enterprise Institute, Heartland Institute, ExxonMobil and other “climate denier” organizations fought back vigorously, refusing to surrender their constitutional rights to participate in this vital public policy debate. The AGs’ bravado and prosecutions began fraying at the edges.

But one wonders: How will these intrepid protectors of the public interest respond to Real Climate Fraud? To intentional misrepresentations of material facts, with knowledge of their falsity, and for the purpose of inducing persons or institutions to act, with resulting injury or damage.

Email ThisBlogThis!Share to TwitterShare to FacebookShare to Pinterest
Op-ed:
Tears for France...Again
By: Diane Sori / The Patriot Factor / Right Side Patriots

The horrific events that unfolded just a mere day ago in Nice, France during Bastille Day celebrations, must be laid at the feet of Barack HUSSEIN Obama…the very man who by his still refusing to even say the word ‘islamic’ when referring to recent terrorist attacks…has shown the world that his deliberate inactions in stopping these savages has most assuredly allowed acts like this to continue.

And now more than ever these acts must simply be recognized and called what they are, as in ‘islamic terrorism,’ for no longer must the word ’radical’ be attached to islam, for like Turkey’s Prime Minister Recip Erdogen said when commenting on the term ‘moderate islam,’ “These descriptions are very ugly, it is offensive and an insult to our religion. There is no moderate or immoderate Islam. Islam is Islam and that’s it.”

In other words even what is currently called ‘radical islam’ is islam…period.

And now the time has truly come for recognizing that islam is indeed nothing but a savage cult of death, and the sooner we in the civilized world recognize the enemy for who they are…islam…the entirety of islam…the sooner our streets will stop flowing red with the blood of innocents. And it’s time that we civilized men everywhere recognize and accept that islam has no place at all in the fabric of any western society, let alone our American society, for the basis of islam lies in subjugation and blood as the very (un)holy book upon which islam is based…the qur’an…calls for its followers to kill by any means possible those who do not believe. 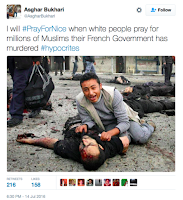 Do I sound hateful…do I sound angry…you’re damn right I do...you’re damn right I am…as the death toll in France as I write this has risen to 84 (and is expected to rise even higher) with ten of those dead being young children…including two of our fellow Americans…Sean Copeland, a father from Texas and his 11-year old son Brody…making this act of islamic terrorism an act against America as well. And as pictures and tweets on social media show muslims worldwide, including in our own country, reveling in happiness over the carnage one of their own has once again caused, it brings back memories of their vile kind celebrating on 9/11 as well.

And as with so many times before where, pray tell, are the voices of what still some want to believe are ‘moderate muslims’…their as expected deafening silence once again screams of condoning for by their not outwardly condemning they do so condone.

And now some in our country ask the question that if we are to be kept safe here at home from events like that which has for the third time shaken France to its very core, how much of our rights must we give up. Well the answer to that should not even be a question we ask for ‘We the People’ must never give up or be expected to give up any of our rights, but those we question…those we rightfully suspect…must be made to give up all of their rights…rights they should not have been afforded in the first place.

And how can that accomplished…simply by bringing back ‘racial profiling’ and acting accordingly by going into the lairs where they live and breed and then by acting accordingly while still recognizing…but sadly sometimes having to ignore…the laws of civilized men.

But again to even do that, the enemy we must recognize and call out by name is islam and that islam’s followers are muslims. And while ‘muslim’ is not now nor has ever been a race, as any who follow islam no matter the color of their skin are called muslims, the simple fact is that while not all terrorists are muslim all recent acts of terrorism, both here in our country and abroad, have indeed been committed by muslims…committed by muslims in the name of allah…in the name of islam.

Committed by muslims and yet…Barack HUSSEIN Obama…our islamic condoning president…our muslim president…still sits back and does basically nothing as attacks of terrorism increase in number both here at home and on a global scale…and these acts are now ever closer together. And in Obama’s trying to label these acts of savagery either ‘workplace violence’ in some cases, the somewhat stronger term ‘hate crimes’ in other cases, or even if the word ‘terrorism’ happens to spew from his lips…Obama still remains ever so careful to dare not say ‘islamic.’ Yet this does nothing to take away from the fact that these attacks were committed by muslims whose loyalties lie with terrorist groups like al-Qaeda and ISIS, terrorists whose mission is driven ever forward by the hateful words laid down in the qur’an and by the words of imams and mullahs ever egging them on. 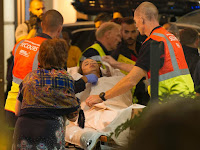 And please, dear reader, do not try to ignore the fact that the enemy of which I speak is already here on American soil for acts like just happened in Nice, France have already happened here in America as well just on a smaller scale… the Boston Bombing, San Bernardino, and Orlando are just to name but a few. And if you notice each act perpetrated here at home increases the number of innocents killed… almost as if each act that comes before is but a trial run for the next terrorist act…a preparation of sorts for the ‘big’ one sure to come…and know that it will probably come sooner rather than later.

So the bottom line again is another question, that being ‘are we truly at war’…a tangible war known as World War III? I believe we are and have been since a sunny day 15 years ago this upcoming September 11th. But this war…a war on a global scale…we currently half-heartedly fight as it foolishly remains a war undeclared for the one who stewards America’s ship thinks by not declaring war, war against his brethren does not exist. But know that it does exist and know that we are losing as a small band of barbaric savages has indeed brought the West…brought America…to her for now impotent knees.

But it does not have to be so nor does it have to remain that way as the eyes of world continues to look to America…to plead for America…to lead the way to make this nightmare end. But ending the nightmare means being victorious, but before victory can be accomplished it means we have to come full-circle back to naming whom the enemy is…and it is and remains islam…the entirety of islam. And only when that is said…and said for all the world to hear…can we move forward as a united front in what should be a million-man army of allies fighting side by side together to annihilate an enemy comprised of what is really a rag-tag group of ununiformed thugs on their home turf.

And that fighting means not just for show as is Obama’s so-called ‘targeted bombing’ of empty warehouses, long deserted terrorist training camps, and convoys going nowhere, but it means non-stop 24/7 carpet bombing…bombing that sends, once and for all, these barbaric savages back to the 7th century from whence they came. And only when that is accomplished must troops be sent in to ‘take out’ the remaining garbage.

And victory also means purging the enemy from the nations of civilized men that they currently reside in…as in rounding them up and deporting them all back to the cesspools of countries they used to call ‘home’ because this is an enemy who is now operating from within the borders of the very countries taking them in…countries whose leaders are blind to the fact that their very inactions are aiding and abetting those actually wanting them dead. And remember, too, that this is an enemy not willing to assimilate into their host county's society as their job, if you will, is to first bring said host country to its knees and then to bend that country to the will of allah…to the will of islam…complete with the abomination known as sharia law.

So as we stand united and grieve together with the people of France as they once again have to bury their innocent dead, the muslim bastard…the French national from Tunisia…who committed such a horrific act and whose name out of respect for the dead will not cross my lips…I can only hope…I can only pray…that the world will finally wake up and realize both whom the enemy is and who is by his very inactions ‘aiding and abetting’ said enemy, and then send them both…the first one literally and the second one figuratively…straight back to the so-called ‘bowels of hell’ from which they both came.

And all the while the world’s call for political correctness regarding those out to kill us all be damned.

1) We’d see frequent discussions on whether bumbling white dads or negative portrayals of southerners on TV and in movies were unfair to white people.

2) The government would be turning down talented black and Hispanic students to allow less qualified white students to get in via Affirmative Action.

3) Minorities would be LEAVING the United States, not making dangerous treks through the desert in the middle of the night to get in.

4) Falsely calling someone a “racist” would be considered to be just as repulsive as being a racist.

5) There wouldn't be an option to press 2 for Spanish.

7) There would be serious discussions about whether the NBA discriminates against white Americans.

Email ThisBlogThis!Share to TwitterShare to FacebookShare to Pinterest
Islamic State has called for vehicular attacks in the West, especially against the “filthy French”
By Christine Williams / Jihad Watch

The Islamic State (and Al Qaeda) have long called for vehicular attacks on Western infidels. On November 19, three French Islamic State fighters repeated the call for attacks in France on video. One of them stated: “Terrorize them and do not allow them to sleep due to fear and horror. There are weapons and cars […]


But Facebook blocks and censors me and anyone who dares oppose jihad terror and sharia.