Op-ed:
Bowing Before the 'Shrine of Intolerance'
By: Diane Sori / The Patriot Factor / Right Side Patriots on http://cprworldwidemedia.net/

“Congress shall make no law respecting an establishment of religion, or prohibiting the free exercise thereof; or abridging the freedom of speech, or of the press; or the right of the people peaceably to assemble, and to petition the Government for a redress of grievances.”
- The First Amendment to the United States Constitution


Religious beliefs vs. our secular based government has recently been brought to the forefront and has gained a life of its own thanks to presidential hopefuls like Mike Huckabee and Rick Santorum, and to a somewhat lesser degree by Ted Cruz, all of whom have make religion a central point in their respective presidential campaigns. Feeding off a woman named Kim Davis and her refusing to issue marriage licenses to same-sex couples even after the SCOTUS ruled that same-sex marriage is now the law of the land, these candidates are weaving their personal religious beliefs into their politics and it is NOT serving them well for the majority of Americans, while holding a strong belief in God, do understand that one's personal religious beliefs need to be checked at the door when holding a government job...a civil service job...with 'civil'...as in 'relating to ordinary citizens and their concerns, as distinct from military or ecclesiastical matters'...being the operative word.

Freedom to believe and worship as one chooses is indeed a right protected under our First Amendment, but also under the First Amendment is the words that, “Congress shall make no law respecting an establishment of religion” and these words mean that there shall be NO official religion in this country. NO official religion...period... and that means that Christianity is NOT the official religion of this country nor is Judaism, Buddhism, Hinduism, or any other ism including atheism. And islam is NOT even a part of this discussion as islam is NOT a religion but a political system and cult hiding behind the cloak of religion. NO official “establishment of religion” means NO particular religion's doctrine and tenets takes precedence over any other particular religion's doctrines and tenets as the definitive way to worship God, but it also means that NO religion's doctrine and tenets takes precedence over the secular law of our land...that being the United States Constitution.


And while many of our Founders and Framers were indeed men of God with deep held personal religious beliefs, many others were deists, and still others held NO deep-seated religious convictions at all, but the one thing they all had in common was that our governing laws were to be constructed so that one's personal religious beliefs were to be kept out of the actual workings of government so as to be fair to everyone. They did NOT play the game that unfortunately so many today are playing...as in my religion trumps your religion...my religion is 'the' religion...my way and my church's beliefs are the only way to God...you know the game as many have played it and played it well, influencing elections and NOT in a good way. 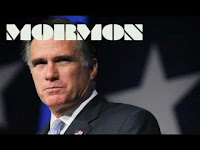 Case in point...remember those who said they would NOT vote for Mitt Romney simply because he was a Mormon... NOT their particular brand of Christian tea so to speak... thereby allowing Barack HUSSEIN Obama to win a second term in office...thus directly being the cause of our country reaching the depths of despair she is in now. And if this same group of people either votes or chooses NOT to vote based upon their religious convictions alone...and if politicians run their campaigns with a focus on religion instead of on the tangible and oh so serious issues facing our country today all because of a woman named Kim Davis...America's downfall will surely lay directly at their collective feet. And just like the 'element' of those 'behaving badly' who seem to think they speak for an entire segment of our population, these religiously judgmental folk think they speak for all Americans of faith...and quite simply...they do NOT. 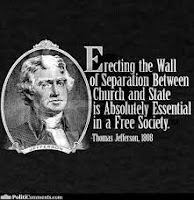 Most people...even many people of faith...do understand the premise of 'separation of church and state' as meaning NO state-run or state-established church or church dogma must make its way into our nation's secular laws as secular law is the umbrella of laws all Americans must follow regardless of their personal religious beliefs. Laid down by Thomas Jefferson in his phrase to that affect concerning the intent and function of the Establishment Clause and Free Exercise Clause of the First Amendment, Jefferson wrote in an 1802 letter to the Danbury Baptists, that he believes that religion is a matter that lies solely between a man and his God (as do I), and that “he owes account to none other for his faith or his worship, that the legitimate powers of government reach actions only, and NOT opinions...”

And it's important to note Jefferson's words, “the legitimate powers of government reach actions only, and NOT opinions...” as those few words give undeniable credence to the fact that the tangible actions of Kim Davis...as in her refusing to issue the marriage licenses to same-sex couples as it now being the law of our land...are what she was arrested for and NOT for her personal Christian beliefs NO matter how hard the religious right wants it to be so...and that includes religious driven candidates Mike Huckabee and Rick Santorum...the later of which would have NO problem turning America into a Christian theocracy.

And as a little side note, here's an interesting fact...the word 'religion'...just like the words 'natural born citizen'...  is NOWHERE defined in the Constitution....meaning that when the Constitution was developed our Founders and Framers based their entire concept of religious liberty upon the history of the times in which they lived and in which the Constitution was written. Simple translation, those escaping the Christian-based theocracies of Europe did NOT want or intend for this new nation to be theocratic in concept or implementation of any one religion including the Christian religion.

As to Kim Davis' role in this conundrum, Davis was and still is a 'civil servant,' and took an oath to uphold the law and to adjudicate her responsibilities accordingly...responsibilities she knew of well before assuming this position...responsibilities that include leaving you personal religious beliefs at the door while maintaining records of all civil governing body transactions including resolutions and ordinances as well as being responsible for keeping records of deeds and marriage licenses, issuing certificates of Vital Statistics (birth, death, marriage), and maintaining most other public records. Davis' duties also include issuing permits for various parades and parties, as well as many other licenses, and in refusing to do even one of the duties her job entails she is indeed breaking the law...in this case breaking the law regarding same-sex marriage as laid down by the SCOTUS...and she is doing so knowingly and willingly, and if she continues to do so Kim Davis needs to resign her government position and take a position in the private or religious sector. 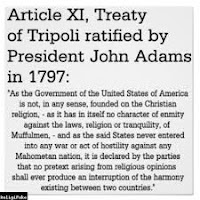 In fact, when Davis altered the marriage license forms of same-sex couples on her first day back on the job after being released from jail...when she removed her name and the name of Rowan county from said forms that were issued by her deputy clerks in her absence...Davis invalidated the forms rendering them legally useless, and her actions were indeed a direct violation of the judge's order that afforded her her release from jail. In other words, Kim Davis once again broke the law knowingly and willingly and is using her personal religious beliefs as the excuse to do so. And the likes of Mike Huckabee and Rick Santorum chose to forget, first, John Adam's words as per the Treaty of Tripoli that, "The government of the United States is in no way founded upon the Christian religion," as well as Thomas Jefferson's very wise words stated in Section II of his 'A Bill for Establishing Religious Freedom [in Virginia]'...that “...all men shall be free to profess, and by argument to maintain, their opinions in matters of religion, but that the same shall in no wise diminish, enlarge, or affect their civil capacities,” (again note the word 'civil') as they rally around a woman trampling on the very laws she as a civil servant swore to uphold and protect...laws laid down by our Founders and Framers like Adams and Jefferson to protect the rest of us from people like her.

People like Kim Davis...people who are imposing their personal religious beliefs on the rest of us who might NOT feel as she does...who might NOT believe as she does... people who believe as did our Founders and Framers that the Constitution is the definitive law of our land with the Bible being the moral code which of our own 'free will' we can chose to either live by or NOT live by in our personal lives. Biblical law was NEVER meant to become part of our secular law, and again as per Thomas Jefferson... whose own religious beliefs were based upon the 18th century concepts of natural law and human reasoning NOT Biblical law...who wrote in a letter to Dr. Thomas Cooper, on February 10, 1814 that, “Christianity neither is, nor ever was a part of the common law.” Nothing could be more clear or more telling than that.

And to put all this into simple perspective, I, a strict Constitutionalist, leave you with some final words once again from Thomas Jefferson who said, “I never will by any word or act, bow to the shrine of intolerance.” And that is exactly what Kim Davis and her supporters are doing...bowing to the 'shrine of intolerance' and doing so both in the name of religion and over a SCOTUS ruling that did NOT go their preferred way as they continue to spread and revel in hate...and it's that very hate the Democrats are counting on to again split the Republican party and be the cause of us NOT turning the White House back to red.
Posted by Diane Sori at 12:00 AM 13 comments: