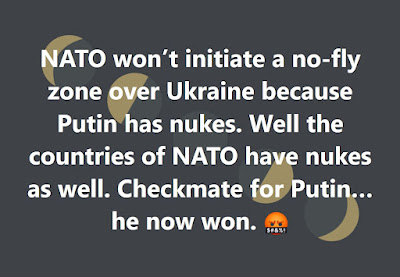 Email ThisBlogThis!Share to TwitterShare to FacebookShare to Pinterest
Labels: checkmate, NATO, no-fly zone, nukes
After Ukrainian City Falls to Russians and Power Plant on Fire, Zelensky Has Idea of How to 'Stop This War'
Rebecca Downs / Townhall Tipsheet

Update: Shortly after this piece was published, Ukrainian President Volodymyr Zelensky tweeted for the first time in 16 hours. The video message, which includes a caption translated to say "Urgently!," appears to be about the Zaporizhzhia nuclear power plant.

Original: The Russian invasion of Ukraine has been going on for a week now, and yet the Russians have only been able to capture one city, Kherson, as Matt mentioned earlier on Thursday. There's been agreements to a temporary ceasefire as well, though the keyword here is temporary, and it's only occurring in certain parts of the country so that civilians can get to safety and food and medicine can get through. Further, "Zaporizhzhia" is trending on Twitter, as is "Nuclear Plant," because Russian troops have gone after that nuclear power plant, the largest of its kind in Europe, located in the city of Enerhodar.

It can't be stressed enough how bad this could be, with some saying this could be worse than Chernobyl, as the Minister of Foreign Affairs of Ukraine warned over Twitter.

Fortunately, the most recent tweet from International Atomic Energy Agency (IAEA) has a bit of hopeful news. Read more and see tweets and videos here.