...In fact, it's word semantics of the very worst kind for with the White House continuing to refer to those Americans still trapped in Afghanistan as being "stranded."..."stranded" is far from the truth for what they are is Americans being abandoned by the very government whose duty it is to protect them. Now a fundamental betrayal of the very basis of this constitutional republic as the president's duty is to protect the "health, safety, and welfare" of the American people no matter where they may be. And with Biden pulling our troops out before all Americans have been brought to safety he has actually violated both the Constitution and his oath of office. Grounds for removal from office we'd say...
Read entire article and see videos here.
Posted by Diane Sori at 11:12 AM No comments:

Email ThisBlogThis!Share to TwitterShare to FacebookShare to Pinterest
Taliban commit 'house-to-house executions' in Kabul after US exit as chilling audio demonstrates Afghans' fear
Afghan man who helped the US on the ground: 'I have no idea how to leave'
Tyler O'Neil , Teny Sahakian | Fox News

Horrifying audio of distant gunshots appears to confirm reports of "house-to-house executions" as the Taliban asserts control of Kabul and Afghanistan after the U.S. military's departure on Monday evening.

An Afghan man who worked with Americans on the ground provided Fox News with the chilling audio featuring distant gunshots.

"I think there's a conflict between the Taliban, I have no idea where I'm located. From everywhere I hear the sounds of shooting, gunfire. I have no idea how to leave," the Afghan man said in the audio clip, recorded around the time the final U.S. plane left Kabul.

Distant gunshots rang in the background in the audio clip. 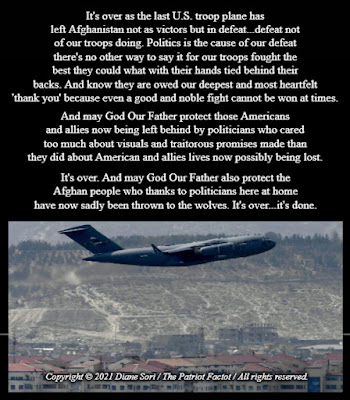 Email ThisBlogThis!Share to TwitterShare to FacebookShare to Pinterest
Labels: Afghanistan, it's over, politics, traitorous promises
RIGHT SIDE PATRIOTS...LIVE!