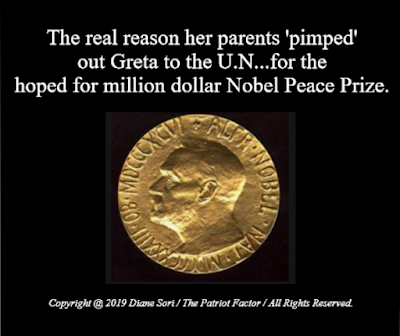 "No one in my family did anything wrong."
- former Vice-President Joe Biden in defense of his son Hunter and brother James

We all knew the Trump "witch hunt / impeachment / political coup" nonsense would somehow, someway see Obama's hand in it. And sure enough that's now starting to surface as it seems that it was Barack HUSSEIN Obama himself who, back in 2015, gave approval to former Vice-President Joe Biden's son, Hunter Biden, to enter into a "joint venture" with a Chinese government entity to buy a U.S. automotive technology company...a company whose technology has numerous military applications.

Something stinks now doesn't it...shades of Hillary's Uranium One deal coupled with a smattering of the Clinton Foundation thrown into the mix...albeit Chinese style that is.

Read entire article and see video here: https://thepatriotfactor.blogspot.com/2019/10/oped-joe-hunter-and-james_3.html
Posted by Diane Sori at 9:33 AM No comments:

Trump Unloads On Pelosi: You're Afraid of AOC And Her 'Squad'
Beth Baumann / Townhall Tipsheet

President Donald Trump on Friday reminded reporters of his approval ratings and his disdain for Democrats' impeachment inquiry over a call he made with Ukrainian President Volodymyr Zelensky. In the phone call, Trump asked Zelensky to look into Vice President Joe Biden's son, Hunter's, swampy behavior. Hunter sat on the board of a Ukrainian gas company and was being paid $50,000 a month despite having zero experience in natural energy. At the time, Joe Biden was handling affairs with the Ukrainian government. Democrats were quick to say Trump threatened to withhold military aid to Ukraine unless Zelensky investigated. That was proven to be false.

Email ThisBlogThis!Share to TwitterShare to FacebookShare to Pinterest
RIGHT SIDE PATRIOTS...for those who missed last night's show or just want to listen in again...where Craig Andresen and Diane Sori discussed 'Joe, Hunter, and James...Corruption Personified'; 'An Untamed Shrew on the World Stage'; and important news of the day...you can listen to it (and previous shows) at your convenience on our PodBean hosting/archive site. Click here: https://rightsidepatriots.podbean.com/ to go directly to our podcasts and hope you become 'followers' of RIGHT SIDE PATRIOTS. And our podcasts are now also on Spotify at: https://open.spotify.com/show/2ZfPSVcjon4DhpHcuAl3BT?si=R6DsTh1uQE2Rejlj2ACKkw

Posted by Diane Sori at 6:21 AM No comments: