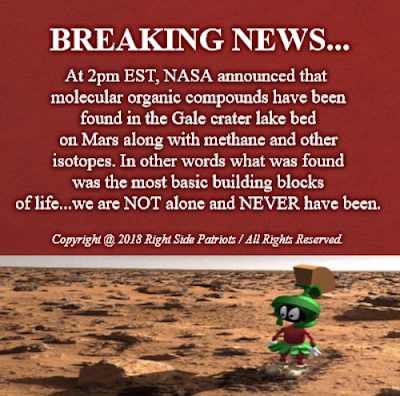 Email ThisBlogThis!Share to TwitterShare to FacebookShare to Pinterest
2018 Elections: Pollster Says GOP Has To Do These Two Things To Win Over Voters For The Midterms

The economy is booming. We have over 200,000 jobs created in May. Consumer confidence is at high record highs. Small business confidence numbers are in the same ballpark. Three million jobs have been created, while over three million workers have received bonus checks averaging $1,000, some companies have doled out $3,000. Thanks to the tax reform package, we have a better job-creating and investing climate. The Democrats universally opposed this bill. In doing so, they opposed tax relief to middle and working class families. They’ve done nothing but obstruct because that’s what their psycho base wants to happen. So, they have a record of nothing.

The pervasive good economic news is beginning to become something that is unavailable for Democrats to escape when it comes to their attacks on the president. It’s quite a coup. The bill that the Left thought would be an albatross around the GOP’s neck ended up generating a booming economy, and the obstruction is now undercutting Democratic attacks against the president.

Trump’s Ambassador to Germany: “Conservatives throughout Europe say there is a resurgence going on”
By Christine Douglass-Williams / Jihad Watch

First it was the Visegrad group, which adamantly stood against the Hijrah — the Muslim migrant quotas enforced by the European Union. Then came the election of Austrian Chancellor Sebastian Kurz, who openly proclaimed an alliance with Hungarian leader Viktor Orban. Orban has refused Muslim migrants, even under threats of punishment from Brussels. Kurz vowed […]
Read in browser »

A new Senate report reveals that Barack Obama secretly paved the way for Iran to tap into U.S. banks to convert cash it received from sanctions’ relief to dollars — despite the face the White House assured lawmakers it would do no such thing.

The report shows how State Department and Treasury Deparment officials during the Obama era quietly gave a special license for a major Omani bank to do business with two U.S. banks.

The U.S. banks were pressured into complying with the deal.
The Washington Times has more:

The Obama administration — despite repeatedly assuring Congress that Iran would remain barred from the U.S. financial system — secretly mobilized to give Tehran access to American banks to convert the windfall of cash it received from sanctions relief under the 2015 nuclear deal into dollars, an investigative report by the Senate has revealed.

Read entire article here: https://gellerreport.com/2018/06/barack-obama-hid-efforts-aid-irans-windfall.html/
Posted by Diane Sori at 8:31 AM No comments: