Wednesday, May 25th, from 2 to 4pm EST, Right Side Patriots Craig Andresen and Diane Sori discuss the Benghazi investigation and soon to released report, Trump's screwing of our veterans, and facebook's selective enforcement against conservative bloggers.

Hope you can tune in at: americanpbn.com And visit our Platinum Player...it's amazing. 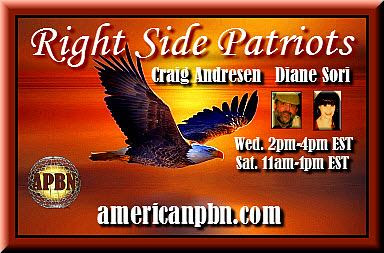 Posted by Diane Sori at 9:32 PM No comments: 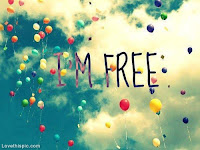 Well I'm finally back, and to say I'm angry and disgusted puts it ever so mildly.

As most of you know I have not been on facebook for quite some time and for two reasons...first, I was out of town for over a month dealing with the final weeks of my mom's life and her most horrific of deaths. I wrote about this in a two-part series on this, my blog 'The Patriot Factor,' entitled 'The Battle Between God and Medicine' which you can read by clicking these links: http://thepatriotfactor.blogspot.com/2016/05/op-ed-battle-between-god-and-medicine.html ...and...http://thepatriotfactor.blogspot.com/2016/05/op-ed-battle-between-god-and-medicine_6.html for parts one and two respectively.

And second, while dealing with my mom's impending death and the aftermath...and I do want to thank those personal facebook friends who stood by me and helped me through this most difficult of times...the facebook powers-that-be once again banned me for a post I did NOT...I repeat...NOT... post. Facebook's reason given...I was one of the admin/editors on the site it (the post in question was a meme) was posted on and as such I should have done my due diligence and taken it down.

Now pray tell I am not on facebook's payroll to act as one of their facebook police (and I never would be as I believe in freedom of speech and would NOT squelch dissenting opinions by anyone) nor is facebook my life. I do not sit at my desk monitoring sites 24/7 as I actually do have a life...something the 'facebook gods,' as I call them, think none of us have. Anyway, on the day I received the notice that I was banned (yet again) this time for 30 days, I had just buried my mother a few days prior, and in no way was I on facebook that day in question...not to post...not to comment...and surely not to monitor sites as I was in the process of grieving as well as trying to arrange for live-in care for my dad. And on top of all this I had no computer internet access at all...none...zero...as my computer had been damaged and was at a repair shop...a repair shop that it turned out could not repair it as they could not get the part that was needed within the time frame I would still be there.

Bottom line...my mom had just passed, I was emotionally devastated, I had to take care of issues with my dad, and I had no physical computer from which to work (let alone even turn on) at all, but I was still banned.

Immediately I contacted facebook...by the way this all was received and transacted through my iphone...and I explained the situation as to why I thought this banning was unfair and why I should be reinstated immediately. And facebook's response was not to respond...not a word did I hear back from facebook after telling me to contact them if I thought this banning was unfair. And then as if to rub salt in an open wound the facebook gods had the gall to go one step further...I was now not only banned from posting, commenting, sharing, liking, or friending anyone but I was locked out of my 'messenger' as well, meaning I still could receive messages but I could not respond to any messages.

This was the first time my 'messenger' was locked down (that's why I could not reply to anyone's personal messages) even though that feature had remained open to me to use during my many other previous 'unfortunate' facebook incarcerations. 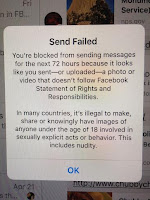 And you will not believe this...with my 'parole' just mere days away facebook again contacted me on 'messenger' on my iphone and said my 'messenger' will be "blocked" for the next 72 hours because I had "recently sent or uploaded a photo or video that doesn't follow Facebook Standard of Rights and Responsibilities"...adding that I knowingly made, shared, or have images of someone under 18 years of age involved in sexually explicit acts or behavior including the showing of nudity. But pray tell me how did I make, share, send, or upload anything to facebook when I was on a complete and total 30-day facebook lock down and ban.

Simply, I did not do any of these things but some coward is obviously reporting me claiming I'm doing things I am not doing...and would never do...and facebook...who is basically accusing me of being a pornographer and pedophile which is an out-and-out lie bordering on slander and defamation of character...is taking a coward's word as gospel truth without even bothering to ask me if said accusations are true or not...not even realizing I could do nothing they accused me of as they had put me in facebook jail weeks ago and that today at 8:33pm EST was my 'parole' date and time.

If facebook was honorable, a formal apology is most definitely in order, in addition to having whomever is making such a vicious and libelous accusation thrown off facebook for good. Also, facebook needs to give me their name in case I wanted to take legal action against them on the grounds of slander and defamation, but I'm not going to hold my breath for any of that as we all know it will never happen.

And so it seems the facebook gods are now pulling the chain even tighter around my conservative neck based solely upon the words of a coward who doesn't even have the courage to confront me directly. A die-hard Trumper perhaps...after all I am a proud member of #nevertrump which irks quite a few...not accusing just wondering is all.

Anyway, my Right Side Patriots partner and friend Craig Andresen put up on my timeline the few articles I have written over these past few months, and now that I am back in Florida and back in operational mode on an old computer that I keep for emergencies...which right now I'm obviously glad I did as my main computer is still waiting for said parts...but when I finally got back online I found that I had been censored to an even worse degree than by facebook...censored and facing the possibility of removal from an 'alternate venue' major internet site (at least they claim they are) simply because I am not on the 'Trump train.'

"We are on the Trump train" and we will do everything in our power to get him elected, one of the admin told me when we spoke on the phone. And while I would love to tell you the name of the site I best hedge on the side of caution with that because of legalities, as I'm not sure if they would come back at me and claim defamation or slander as the head admin is a 'person of name.'

To continue, the admin I spoke with then told me they do not want any anti-Trump articles on their site as he is the presumptive nominee, to which I said you mean on a site you claim is a champion of free speech I am being censored and my articles are being removed because I am writing articles showing why I believe Donald Trump should not be afforded the Republican nomination no matter that I'm using documented facts not here-say, innuendos or lies to do so, and that I can 'source' everything I write. Did that matter to the admin...no..not one little bit...who then went on to say that "we are NOT censoring you" (which is exactly what was being done by taking down my articles), "we are supporting the nominee"...to which I replied that Trump is not the 'official' nominee at this point in time as the needed 1237 delegate number has not yet been reached.

Did that pesky little fact matter...of course not...not to a web site claiming to be the afore mentioned champion of free speech which in reality it is anything but...in fact this site's actions are actually more grievous than facebook's because at least with facebook their liberal progressive political leanings and agenda, along with their in-your-face muslim/islamic condoning nature, are not hidden...they do wear them on their sleeve you know. Oh, and by the way, I was approached and asked by the admin to write for this site...I did not in any way approach or ask them if I could write or post on their site.

And the bottom line in all this...we now have online yet another 'supposed' conservative web site...one that I believe is proving by their very actions in regards to my posts not to be what they purport themselves to be...a site that also has a presence on facebook...a site with the very same name that caused me all my current facebook problems...outwardly supporting the anything but conservative candidate now telling me what I can and cannot write...that all my articles will be 'reviewed' before they are published...and if I continue to write and post anti-Trump articles...and know that I write way more than just articles about Trump...that I will no longer be welcome to post on the site.

And why...because I upset the sensibilities of 35 or so Trumpers...out of the five plus figure numbers they claim visit their site daily...35 who went whining to the admin that I was not on the 'Trump train'...that I was against party unity...which by the way I am not as I know well that we must unite behind the right candidate to beat Hillary Clinton, but simply, that candidate is not Donald J. Trump...a man (I still believe was) put into the race to assure a Hillary presidency.

Anyway, I do not and will not abide being told what I can or cannot write...even for a private for profit site...so I did one better...I told the admin to remove me and all my articles from this site immediately as I want no part of a site that practices censorship and has zero tolerance for anyone that does not and will not do their bidding...their bidding and/or Trump's that is.

And as for the 'person of name' connected to this site, he should be so ashamed of himself for censoring me...which goes against everything he claims he believes in and supports...and he says so during the many times he's been a guest on a major news station...with free speech being number one. But as we all know talk is cheap and actions do speak louder than words, and this man and his fellow admin's actions prove they are not what they purport this site to be as they are doing the left's bidding by trying to 'silence' all opposing voices whether they realize it or not.

So my dear readers while I am happy to be back and posting again what a past few months I've had...a few months I do not wish on anyone. And while my mom is now thankfully at peace, she wanted me to carry on in the battle for our country which I will surely do both in her honor and because I am a patriot...and the facebook gods and phony conservative web sites will NOT stop me from getting the truth out...the truth the media does not want you to know...the truth that some 'supposedly' on our side are blind to...for if we do not get it right this time we might never get another chance to do so...at least not as the constitutional republic known as the United States of America that is.