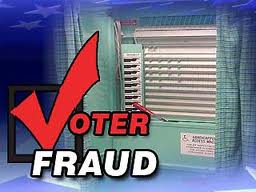 As you all know I have been a poll watcher this week for both Mitt Romney and Karen Harrington.  I have also briefly told in my previous op-eds the goings on at the poll I was working.  However, what I reported on before was NOTHING compared to the out-and-out in your face fraud that was done on Saturday, the last day for early voting here in Florida.

But you do need to know the steps leading up to everything.  I have told you about the outright nasty and despicable behavior on the part of the clerk who also happened to be the site manager.  She started the minute she saw I was from the Republican Party, and did NOT let up until I left each day, but what she didn’t count on was coming up against someone like me who would NOT take her crap and total disrespect for our voting system.

This woman made a point of constantly coming over to me spouting off, in a very loud and nasty voice for all to hear that,  a) I couldn’t wear my campaign shirt inside ‘her’ poll (I had it completely covered with NO writing showing at all which is the allotted policy), b) I cannot talk to the voters (which I NEVER did except to help the woman who was ill...see previous op-ed for that story) or she would call the police, c) that I must sit or stand in the designated area by the entrance door behind ropes and NOT move from that spot or again she would call the police (the space she designated for poll watchers was roughly two feet by maybe six feet and that was the allotted space for both party’s people, and where we had NO view of the goings-on at the machines as they printed out and recorded the ballots), and d)  that only one Republican party member could be in ‘her’ poll watching at one time, and that when my poll watching partner came in I must leave ‘her’ poll and leave immediately or she would yet again call the police because my mere presence was an interruption to the voters and the voting process at 'her' poll.

I really didn’t know that this poll belonged to ‘her’...but then again all the Obama people seem to have an ‘it’s all about me attitude.’

Anyway, this was far from my first time as a poll watcher, I knew the rules and I sure as hell did NOT need this nasty woman in my face all day long every time I so much as moved a muscle.  And by the way, she said NO such things to the Democratic poll watchers nor did she even approach them.  Her loyalties could NOT have been more obvious.

In other words, the person in charge of early voting at this site did NOT know the Florida rules regarding monitoring of the polls and if she did know but chose to ignore them because of the party I and my partner represented, then she willingly and with malice broke the law, and it could well cost this nasty bitch her job in the end and rightly so, because guess what...it’s NOT being dropped.

To continue...the lines at the polls were exceedingly long on Saturday, with the wait at one time up to four hours.  So to expedite the process, at one point in the day additional machines were delivered to the site (and witnessed to that effect by many people) to aid in the voting which is all well and fine.  What is NOT well and fine is my going over and asking the clerk to see the zero tapes before the machines were put online (which is one of my responsibilities as a poll watcher) and told that NO such machines were delivered and that I am lying that they were.

NO...I did NOT lie...the clerk lied and I told her so right to her face.  Needless to say, a short while later I was indeed shown the tapes to the six machines brought in, but only shown the first read-out of each machine which did show zero, but was not allowed to unravel each tape to see the test run-throughs.

And so the outright FRAUD began.

There was NO problem with the people waiting to come in, the major problems started once inside.

When you entered the poll you were instructed to go to one of two lines where your license with photo was swiped to see if you were indeed a registered voter and if you had already voted.  If it cleared you then had to sign your name to show that you were now voting, but if the signature didn’t seem right you were asked your address for verification.

And here is where the first of the FRAUD came in as I, and my partner, witnessed on numerous occasions the registrars actually turning the machines around to show ‘certain’ people the addresses on the screen when they said they weren’t sure, then once they said ‘yeah that’s it’ they were allowed to go in and vote. This is what happened on Thursday when I caught the registrar trying to let someone vote twice before I walked over and the man admitted he had voted already, and continued happening at times all three days I was there.

I also witnessed, and so did my partner, the registrars admitting ‘certain’ people in to vote WITHOUT signing in that they were voting at this site.  This allows that person the ability to then go vote again at a different location or on Election Day, because there is NO record of them having signed in to vote so that gives them the ability to vote over and over again.

This, my friends, is how multiple voting is done...you don’t sign in so there’s NO record that you voted.  This is FRAUD of the first degree...a felony if caught and convicted NOT only for the person who committed the FRAUD but also for the person who willingly allowed it to happen.

Also noticed and duly recorded was that fact that ‘certain’ people were allowed to go to the clerk’s desk to be cleared if there was a problem with their license.  At the desk they were given either a business card or a handwritten piece of paper with a phone number on it to call for clearance, and once cleared they were allowed back in to vote.  I would assume the business card was legitimate, probably the number to the BOE, but God only knows whose number was on the piece of scrap paper that ‘certain’ people were given.

And add to this that my partner and I both witnessed  ‘certain’ people being allowed to actually register to vote the same day they were there to vote which is against the law in Florida.  Voter registration closed weeks ago and Florida does NOT allow same day registering and voting.

Anyway, trying to stop this fraud ourselves would have done NO good as a fight would have started and we were definitely outnumbered, so I went outside and called the Republican Command Center in Tampa which has the authority to step-in.  They immediately sent over an official lawyer from the Romney campaign who went inside and verbally had it out with the clerk.  At this point is where my partner and I gave the official statements and testimony and will probably be called on to give even more.  This is critical because if the race is close FRAUD will be called and consequences will fall into place.

While I wish I could tell you more I am NOT allowed to right now as this is an on-going investigation with possible charges pending, but I will keep everyone abreast of further details as I am allowed to do so.

But one thing I will tell you is that while I am only one person, I am one person who holds the sanctity of the vote dear for many brave Americans gave their lives for us to able to vote, and I, even with my so very limited powers, will NOT allow anyone to make a mockery of their sacrifice or of our right to a free and fair election.

And Barack HUSSEIN Obama, his minions, and cronies can take those words to the bank.
Posted by Diane Sori at 4:08 PM 27 comments: