Op-ed:
Only By Unbinding The Delegates Can Hillary Be Stopped
By: Diane Sori / The Patriot Factor / Right Side Patriots

Last week F.B.I. Director James Comey, via a televised news conference, announced that after a year-long investigation into the Hillary Clinton email scandal no recommendation to indict will be forthcoming from his office. And yet in the next breath he issued stinging comments against Hillary that gave the Republican presumptive nominee, Donald J. Trump, ammunition to argue the case that Hillary had still shown poor judgment that put the security of our nation’s secrets at risk.
But showing poor judgment when the lure of ‘free stuff’ is still out there might not be enough to stop the Clinton juggernaut for the only way to stop Hillary is to have her run against a true Republican…a true conservative…and that would not be Donald J. Trump.

“The convention rules of the Republican Party do not bind delegates to cast their votes according to the results of binding primaries."
- RNC Council’s Office

And with those words it can now be said that the court case brought by Beau Correll, a Virginia delegate opposed to Trump's nomination sued to have Virginia's votes unbound and guess what...he won! So while Virginia does have a law that delegates to the party conventions are bound to cast their votes for the state winner, the Virginia court late Monday afternoon ruled delegates cannot be "compelled by state law" to cast a vote in a particular way.

And this ruling actually reinforced a Supreme Court ruling from almost forty years ago that stated that state laws could not take precedence over national party rules. And their reasoning was that political parties must be free from government control, especially regarding who the party’s nominee would be, the delegate selection itself, and how the delegates could vote.

So with some surely now saying that the fix is in, the reality to be remembered is that Republicans win elections when they hold true to both their Republican and conservative principals, but Republicans lose elections when they nominate at convention those who masquerade as Republicans but who actually are Democrats in disguise. One case in point being those life-long Democrats who 'suddenly' switch parties within just a few years...or less...of announcing their run for office.

And such is the case with reality TV star and presumptive Republican nominee Donald J. Trump, a man who continues to have and to support liberal leaning causes, policies, and candidates while tenuously straddling both sides of the political fence. And straddle the fence Trump does while he backtracks on stances…stances taken to inflame and pander to the masses…masses who voted in the primaries out of anger instead of out of logic, facts, and a closer vetting of the man who wants to be emperor…for Trump's inflammatory actions and words clearly show that merely being president is not quite good enough for him.

So now knowing the facts as per both the SCOTUS and the Virginia court rulings, the question still to be answered is how do we legally get a true conservative candidate as the nominee to run against Hillary now that Trump has reached the magic 1237 delegate number…as in a nominee who can actually win in November…how...besides the above stated court adjudications we use the Republican Party’s own rules to do so.

And some of those very rules were passed at the 2012 Republican National Convention and they pertained to and expanded upon party rules 14 and 16(b)(1)...rules that governed the election and selection of delegates, and included words to the affect that delegates at the national convention are free to ignore state law...rules beginning with the very words “No state law shall be observed…”

And not to be forgotten is that at the 1976 presidential election, out of fear of losing pledged delegates to Ronald Reagan, the Ford campaign forced the adoption of the ‘Justice Resolution’ which amended the convention’s long-standing rule of delegates voting their conscious…voting for whom they so wished…and amended it so that delegates were now bound to cast their votes for the victor in each state’s primary. This resolution, thankfully, was short-lived for at the 1980 convention said resolution was rescinded, thus restoring the right of the delegates to vote as they saw fit.

“The Rules of the Republican Party prohibiting the binding of delegates have not been changed since the 1980 convention.”
- Curly Haugland, Republican National Committeeman for North Dakota

And while 20 states have passed laws…statutes actually…that ‘supposedly’ bind their state’s delegates, these statutes cannot be legally enforced… meaning that Republican delegates at this July’s convention can indeed legally vote their conscious even on first balloting, because to be forced to do otherwise does violate the First Amendment and the simple fact is that it’s the delegates…most especially the ‘super delegates’...who are the ones who ultimately choose the nominee no matter the primary vote.

How so you ask…you need to understand that a political party, no matter its party affiliation, is what’s known legally as a ‘private association’…an ‘association’ whose members come together to further their shared beliefs through what’s known as ‘electoral politics,’ and therefore they have the right to pick ‘their’ representatives of ‘their’ own choosing…representatives who then basically become what’s known as a ‘super delegates.’ And ‘super delegates’ can and do vote for the candidate of their own choosing during any round of balloting including on the first round. And with hundreds of delegates and alternates already having signed online petitions to show their commitment to stopping the phony Republican...Donald J. Trump...from securing the nomination, those numbers can rightfully change the previously assumed outcome of who gets nominated and who does not.

And for those who say that we comprising the #nevertrump movement are trying to steal the nomination away from the man they believe it rightfully belongs to…I say you cannot steal something that no one has yet secured as the convention has not even been held at this point in time, hence not one single delegate vote has been cast yet…so in no way has anything been stolen from anybody…especially from somebody who has done little to nothing to unify the party…period.

And uniting the party is critical especially in going against the Clinton machine yet true conservatives, for the most part, still will not support or vote for Trump. And those elected to public office…those who do hold some sway over constituents opinions…are not rallying around him either, no matter Comey’s report and recommendation, a sure sign that Donald J. Trump will not beat Hillary Clinton in a head-to-head race. 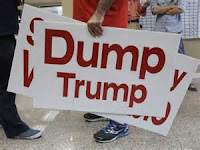 Nationally, an ABC News/Washington Post poll, taken in the last week of June, showed Hillary leading Trump by 12 points, 51% to 39%, being her largest lead in any telephone survey since both candidates became their parties' presumptive nominees. And while Hillary’s lead in the NBC News/Wall Street Journal poll out last Sunday is smaller, coming in at 5 points, the fact is that Hillary has now led consecutively in the past 11 polls conducted by live telephone interviewers.

Ah…the powers of the promises of ‘free stuff'...'free stuff' we taxpayers are actually paying for.

And while a Quinnipiac University poll, like Rasmussen, shows Hillary up by just 2 points, 42% to 40%...again within the margin of error…it also showed that Hillary was opening up a lead in the key state of Florida, basically now tying Trump in Ohio, and with the numbers also basically tying Trump in Pennsylvania...meaning as she gains Trump loses.

And of critical note is that Trump is trailing Hillary on a number of other key indicators, including candidate favorability, which by the way is not good for either candidate what with a 34% favorability for Trump and 37% favorability rating for Hillary. And it gets worse for both as 58% of American voters say Trump will not be a good president with 53% saying the same about Hillary Clinton.

And when the two leading third party candidates…Libertarian Gary Johnson and the Green Party's Jill Stein…are added into the mix, Reuters/Ipsos has Hillary at 42% to Trump's 33% with Johnson at 8% and Stein at 4%, meaning Hillary is at +9 with 39% to Trump’s 37% of the national vote...with both Johnson and Stein (unfortunately) taking votes away from the Republican totals not from the Democrats totals.

And these numbers are even more unsettling as they mirror somewhat the much needed electoral college votes. As per a Thursday, July 7th FOX News report, out of the 270 votes needed to secure the presidency, right now even after the F.B.I. findings, Hillary Clinton still has a solid 227 electoral votes when states considered solidly Democratic and leaning Democratic in the November election are counted to Donald Trump’s 191 electoral votes when states considered solidly Republican and leaning Republican are counted. But with 120 votes still being a toss-up and with more of those toss-up votes leaning Democratic than they are Republican, the outcome with Trump as the nominee does not look good.

“We’re not just people who said, ‘We’re disappointed. Our candidate wasn’t nominated…We don’t believe Trump “embodies the Republican Party principles”…We do not see him as being the right person for the Republican candidate, and we also don’t feel that, even if he was nominated, that he would be able to win."
- Regina Thomson, co-founder of Free the Delegates 2016

Now for some basic facts about the Republican National Convention itself as it relates to unbinding the delegates. First, from Monday, July 18th through Thursday July21st, 2,472 Republican delegates will attend the convention in Cleveland. Second, it’s the Rules Committee itself that decides on the official guidelines…as in bylaws…that govern…if you will…the convention…with said guidelines having to be ratified…or not ratified…by the delegates present. Third, while most delegates are grassroots party activists who vigorously campaigned to represent their congressional district or their state, there always are a certain number of delegates set aside for so-called ‘party insiders,’ including each state’s party chair and two Republican National Committee (RNC) members. And it’s these 112 committee members who make the rules…the bylaws…that govern the convention and who have the power to change or not change existing rules at the convention…and in the case of Trump hopefully will.

So while the convention can and usually does afford the nominee a bounce in the polls…and Trump needs a convention poll bounce big time as the majority of Republicans are still not in his corner...and with the harsh reality of numbers staring us in the face, the con job perpetrated by the con man on the angry masses continues…a con job that is going as planned…a con job that had Donald J. Trump put into the race to assure a Hillary win. And I stand by my words no matter what those in my party who support Trump have to say.

And the bottom line in all this is....Cleveland here we come!