Having reviewed the FBI’s supplemental background investigation, the White House said on Thursday it was “fully confident” that Supreme Court nominee Brett Kavanaugh would be confirmed.

“With Leader McConnell’s cloture filing, Senators have been given ample time to review this seventh background investigation,” said Raj Shah, the principal deputy press secretary for the White House.

“This is the last addition to the most comprehensive review of a Supreme Court nominee in history, which includes extensive hearings, multiple committee interviews, over 1,200 questions for the record and over a half million pages of documents. With this additional information, the White House is fully confident the Senate will vote to confirm Judge Kavanaugh to the Supreme Court.”

With Leader McConnell’s cloture filing, Senators have been given ample time to review this seventh background investigation. This is the last addition to the most comprehensive review of a Supreme Court nominee in history, which includes extensive hearings, multiple (2/3)
— Raj Shah (@RajShah45) October 4, 2018

The History of Jihad: “A monumental book….explodes many cherished assumptions of modern-day policy-makers”
By Robert Spencer / Jihad Watch

In case you missed it, here is a superb review of my new book The History of Jihad From Muhammad to ISIS (which you can order here) by Jihad Watch writer Christine Douglass-Williams: “Robert Spencer Exposes Islam’s Problematic History,” by Christine Douglass-Williams, Mackenzie Institute, September 1, 2018: Robert Spencer’s extraordinary new book, The History of […]
Read in browser »

The smoking gun in the big set-up. A coup without firing a shot.

It looks very much like Christine Ford was a patsy, primed, coached, and one supposes scripted by her friend Monica McLean, a former FBI lawyer. And unless someone can make the case that she was at Rehoboth Beach last July purely because it was a noted vacation spot — lol. So, as many have noted, the Democrats’ push for an FBI investigation is their own undoing, it seems and Ford will have to sit on a water barrel to douse her pants. 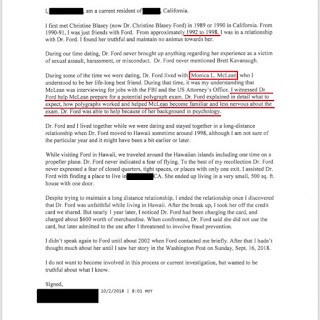 In a letter released last night from a former boyfriend of Christine Blasey-Ford, there was a name curiously not redacted. The name of Monica L McLean was revealed as a life-long friend who Ms. Ford helped with polygraph preparation.

The media has begun to focus on the letter as outlining a lie told by Ms. Ford during recent congressional testimony… But the backstory to Ms. Monica Lee McLean is an even bigger story.

First the letter from the boyfriend: