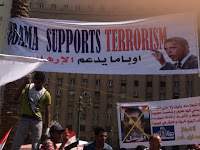 The victory of Donald Trump in 2016 (and 2020) was a response, a complete repudiation of the disastrous Obama presidency. The country will not sit still for Obama 2.0.

The Biden administration has already unrolled its plan to return to the 2015 nuclear deal and has begun holding quiet talks with Iran, an Israeli TV station reported Saturday.

Officials for the incoming administration have also updated Israel about the conversations, Channel 12 News said. A separate report by the Israel Hayom daily said Israel, wary of Biden’s promise to return to the deal, is crafting military options to “undermine Iran’s nuclear efforts or, if need be, counter Iranian aggression, which will soon be presented to the government.”

Email ThisBlogThis!Share to TwitterShare to FacebookShare to Pinterest
Parler CEO Projects When Social Media Platform Will Be Back
Leah Barkoukis / Townhall Tipsheet

After Amazon Web Services kicked Parler off its servers, things were looking bleak for the nascent social media company. But on Sunday, CEO John Matze expressed optimism about when the site would be back.

“I’m confident that by the end of the month, we’ll be back up," he told Fox News. "Every day it changes wildly, but … we’re making significant progress. When you go into Parler.com it doesn’t go into the void now, it hits a server, and it returns just one piece of information."

“America will never be destroyed from the outside. If we falter and lose our freedoms, it will be because we destroyed ourselves.”
- President Abraham Lincoln, 16th President of the
United States

And Lincoln's ominous words sadly ring true today what with Democrat leaders and their party ilk already having attacked President Donald J. Trump and his family on a personal level even before he actually beat Hillary Clinton, and have since day one tried their damnedest to undermine his presidency with lies and innuendos the mainstream media gladly helped to perpetrate. And know these attacks will continue on even after he leaves office as House Speaker Nancy Pelosi has promised to get Trump impeached no matter how long it takes. But if now President-elect Joe Biden really wanted Americans to stand united as one, as he so often claims, he would tell Pelosi and her House cronies to drop this impeachment nonsense so he can “build back better”...his words not mine.

“Build back better”...what a farce those three words are especially economically wise as they come from the very man whose now proposed economic plan would fast track our country towards bankruptcy, higher interest rates, higher inflation, and much higher taxes for all... most especially for the struggling middle class. A tax and overspend plan we as a nation can ill afford...typical of the Democrat's socialist agenda via a wish list that sounds more like the wants of Bernie Sanders and AOC than it does a wish list from a man purporting himself to be a “moderate”...at least he loves to play one on TV.

And here let's remember that U.S. economic growth actually hit 4.2% before the nasty little now politically weaponized virus from China invaded our shores and that Americans were far better off both economically and foreign policy wise under the leadership of Republican President Donald J. Trump than they ever will be under the leadership of Obama's ever so “temporary” puppet Joe Biden.

In fact, not only did President Trump cut stifling business and corporate regulations which resulted in a much lower corporate tax rate...which in turn brought foreign based American companies back to the U.S...but that he also cut “We the People's” personal taxes as well. Now on the other hand, Biden's most irresponsible of economic plans would likely result in companies fleeing back overseas... with increasing regulations being the catalyst coupled with up to four million jobs being lost...thus canceling out the four million jobs created under President Trump which, by the way, resulted in the highest U.S. labor participation rate ever recorded. But sadly, that participation number will soon come crashing down as not only will Trump's all-around tax cuts become but a fond memory, but Joe Biden also plans on minimizing deductions and refunds relating to one's personal taxes so be prepared to take home less pay week after week after week.

Also becoming a fleeting memory is that under President Trump's economic plan not only did the stock market soar to its highest numbers ever, but America saw her lowest unemployment numbers in decades with black and other minorities seeing their lowest unemployment numbers as well...a numbers gain which, too, would be canceled out for why seek gainful employment when Biden's plan, with all it's freebies, handouts, and perks would actually take away people's incentive and desire to work. And when incentives are removed from any economic equation all one is left with is even more folks not just with their hands out freely taking all they can get, but folks actually beholding to the government for their very survival...an ever so dangerous parasitic relationship if ever there was one.

Welcome to socialism 101...welcome to what would now be President Joe Biden's “pork laden” version of Venezuela North.

And on the foreign policy front not only did foreign countries respect us and American exceptionalism once again after eight long years of the Obama/Biden administration not only catering and bowing down to our enemies but at the same time apologized for America, but our military presence from within countries seemingly locked in a cycle of endless wars was greatly downsized as President Trump started bringing our war-weary troops home. Now Biden, on the other hand, has publicly stated that he will keep American troops in Afghanistan while he's in office thus putting them in harms way in a country that most decidedly doesn't want us there. And while also successful in getting NATO members to start paying their fair share regarding global defense spending, President Trump rightfully moved our U.S. embassy to Israel's forever capital of Jerusalem much to the Democrat's chagrin. But his crowning foreign policy achievement was something many have long thought impossible as this brave man helped broker peace treaties between the Jewish State of Israel and her now “former” Arab enemies for which he's garnered at least two Nobel Peace Prize nominations.

And dare we forget President Trump removed us from both the Paris Climate Accord (as in the monstrosity of wasted taxpayer dollars by those kumbaya sorts who think they can control the “weather”) and from Obama's ever so dangerous Iranian nuclear deal (The Joint Comprehensive Plan of Action) that he and Biden were so proud of...both of which Biden says he'll sign us back onto. And then there's our southern border with Mexico now being more secure than ever with over 450 miles of new wall or improved fencing coupled with illegal crossing numbers taking a nosedive down, while Biden and those loyal to him want those walls actually being removed...but of course they do as it helps to garner more "illegal" Democrat party votes.

And all the good things cited above were done in but one term as President Donald J. Trump brought back not only pride in America herself but in American ingenuity and the aforementioned American exceptionalism, all of which can be seen in his “Warp Speed” medical program that got a COVID-19 vaccine to market in under a year. And what did the previous administration bring to our country that the new administration has pledged to continue on with but for America to be turned into a socialist nation. And that comes replete with so-called “identity politics” being the fuel thrown on the pyre of partisan driven hate courtesy of one former president's words and actions that were the catalyst for the violent renewal of self-perceived racism that for the most part no longer existed in our nation...contrary to what the BLM sorts say.

Also, let's not forget that “political correctness” will also stay the mandated order of the day under a Biden/Harris administration, with “political correctness” actually being what is in reality one-sided censorship morphed to the nth degree...censorship aided not only by the media but by the "thought police" known as Facebook, Twitter, and YouTube. And the “cancel culture” movement...an ignoble movement which started making waves by tearing down or defacing statues of America's heroes...foolishly still believes that removing a piece of stone and plaster will erase American history...will soon be dictating to us what exactly can become a part of our nation's history and what simply cannot. And know that “reparations” for folks who themselves were never slaves will now, under a Biden/Harris administration, become an integral part of our nation's newly partisan decided history...and it's simply payback Democrats owe for the still huge percentage of black votes garnered.

And firearm ownership will become our personal well kept secret for the all important Second Amendment...the very amendment our Founders and Framers wrote into the Constitution to assure a restraint was put on the power of the government to interfere in our personal lives...will most assuredly see the Democrats trying to place it on the ever proverbial chopping block. And whether the Democrats are or are not successful in taking away our guns remains to be seen but know that the old adage “behind every blade of grass” has now taken on new and ever critical meaning. But even if the Second Amendment does stand as is, know that "aggressive" gun control measures as well as implementation will become a law not unlike an athlete super-hyped up on steroids. 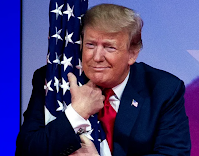 And while the picture of compare and contrast that I've painted with carefully chosen words seems bleak, especially with the House voting to impeach President Trump for a record second time...ensuring that he will remain at the center of partisan debate and political discourse long after he leaves office...the only saving grace, if you will, is that in the end I do fully believe that President Trump will not only have the last laugh but that history will be kind and herald not only his deep love of country but his many achievements done on behalf of "We the American People."

And I also believe that not too long from now President Donald J. Trump will be proven right about the election being stolen, and that many will be forced to pay the price for what they've done as history also does have a way of righting grievous wrongs. But until that time comes be prepared for yet another four, if not eight, long years of hell especially knowing that Joe Biden was never intended to be president for very long...he's just a place holder for Kamala Harris being Barack HUSSEIN Obama's defacto third term in office. And while this means that America might indeed have a long and hard road back to what are our constitutionally granted freedoms and rights, know that more times than not freedom's quest is indeed something worth fighting, and if need be, dying for. True patriots know this well...and to that I say “amen.”

Tomorrow, Tuesday, January 19th, from 7 to 9pm EST, RIGHT SIDE PATRIOTS Craig Andresen and Diane Sori discuss 'Compare and Contrast...The Present vs. The Future'; 'In a State of Social War'; and important news of the day.

Hope you can tune in to RIGHT SIDE PATRIOTS on https://rspradio1.com. Click 'LISTEN LIVE' starting at 6:50 pm EST with the show beginning at 7pm EST.
Posted by Diane Sori at 6:38 AM 2 comments: