Hi. I’m Wayne Allyn Root for Personal Liberty. President Obama and our wonderful government call their favorite new bill “TPP” for Trans-Pacific Partnership. But it’s really a bipartisan Ponzi scheme. It should be called “Trans-Pacific Ponzi.” It’s a trillion-dollar rip-off of the American people and American workers. Obama wants “fast track authority” because he wants to put the end of America as we know it on a fast track.


Trust me; neither TPP or TPA (Trade Promotion Authority, i.e., fast track authority for the president) are dead. Like Freddy Krueger of “A Nightmare on Elm Street,” they will keep coming back from the dead because the billionaires and billion-dollar multinational corporations want TPP. The powers that be won’t give up. They will not rest until it passes, by hook or by crook. And since they are all crooks, they’ll use any means necessary to get it passed.

My book “The Murder of the Middle Class” describes the unholy alliance of the socialists and communists like Obama and the crony capitalist corporations that own both political parties. The TPP is the perfect example of the murder of the middle class in one devastating treaty. Passing it requires secrecy and fraud carried out by both Obama and his partners in the Republican Party. Fraud and treachery make for strange bedfellows.

The worst part isn’t even what’s in it — and it certainly contains a toxic brew that will destroy millions of middle-class jobs. More on that later. But the worst part is how it’s been hidden from the people by Obama and the Republican leadership, working as a tag team like this is a WWE match.

Do you remember when Nancy Pelosi said, “We have to pass the bill so that you can find out what’s in it?”

In PJ Media today I explain how Ayman Al-Zawahiri and bin Laden communications reveal that a caliphate has always been the goal. It has been almost a year since June 29, 2014, when the Islamic State of Iraq and al-Shams (ISIS) declared the formation of a new caliphate and dropped the second half of its […]

Of course they pleaded “not guilty” because they are acting and adhering to Islamic law (sharia).

Two jihadis pleaded not guilty Friday to conspiring to support the Islamic State group in a plot to “kill a conservative blogger Pamela Geller who has angered Muslims.” What doesn’t anger Muslims? And are we to refrain from doing anything that Muslims don’t like or might anger them?

Pair accused of conspiring to provide material to support terrorists.

BOSTON —Two men pleaded not guilty Friday to conspiring to support the Islamic State group in a plot to kill a conservative blogger who has angered...

Today, Saturday, June 20th, on RIGHT SIDE PATRIOTS on CPR Worldwide Media, from 11am to 1pm, Craig and Diane will discuss the Charleston murders, the unwanted scenario of 2017, and the awkward moment when you realize... 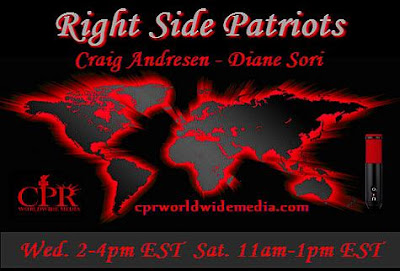 The terribly tragic story of the Charleston church massacre has just gotten even more sad and sickening, if what a South Carolina law enforcement source has just disclosed turns out to be true.

CNN is reporting that 21-year-old Dylann Roof, accused of the cold-blooded murder of nine people attending Bible study at the historically black Emanuel African Methodist Episcopal Church, has confessed to the horrific crime. And he has reportedly given a reason for his premeditated massacre — he wanted to start a race war.
Now charged with nine counts of murder and possession of a firearm during the commission of a violent crime, Roof is said to have admitted to investigators that he was the man with the gun on Wednesday night. He also reportedly confessed that his murder of nine people at the Emanuel AME Church was intended to turn whites and blacks against each other in bloody confrontation. CNN reports:


CNN’s Evan Perez and Wesley Bruer were the first to report Roof’s confessing and offering his divisive rationale. Others earlier gave a glimpse into his twisted motivations — including at the site of the shooting, Emanuel African Methodist Episcopal Church.

There, a survivor told Sylvia Johnson that Roof answered one man’s pleas to stop by saying, “No, you’ve raped our women, and you are taking over the country … I have to do what I have to do.”


Fox8 TV is reporting that two unnamed law enforcement officials involved in the investigation have revealed that Roof claims to have bought the .45 caliber handgun he used in the killings. The suspect’s revelation that he himself purchased the murder weapon from a gun store would seem to let his father off a potential legal hook, as earlier reports indicated Roof’s dad had given him a gun for his 21st birthday.

Later this afternoon, Roof — who was apprehended in North Carolina some 200 miles away from the crime scene and transported back to Charleston — is expected to have a bond hearing in a South Carolina court.
Posted by Diane Sori at 12:31 AM No comments:

Email ThisBlogThis!Share to TwitterShare to FacebookShare to Pinterest
Hillary: Trending To Below Fifty Percent

Published on TheHillaryDaily.com on June 19, 2015

While Hillary still has a big lead over the rest of the Democratic field, she is trending rapidly towards that dangerous territory -- below the vital 50% threshold.  Given the weakness and lack of funding for her Democratic opposition, it is tremendously significant that about half of the party's primary voters in key early states do not vote for her.

In Iowa, the first contest, she has slipped from 60% on May 7 in the Quinnipiac poll to only 54% in the June 15th Morning Consult survey.  That means, of course, that 46% of the likely Iowa caucus goers choose not to back her at this stage.

In New Hampshire, the drop is even greater.  The Bloomberg/St. Anselm Poll of May 10th gave Hillary 62% of the vote among likely primary voters.  But the June 15th Morning Consult poll has her down to 44% of the vote.  In the Granite State, which powered her 2008 recovery from her Iowa defeat, 56% of the voters won't back her candidacy. Now that's very significant.

Even in South Carolina, where her support tis anchored by a large black vote, she draws only 56% of the vote in the June 15th Morning Consult survey.

The votes of those opposed to Mrs. Clinton are clearly fungible.  A voter who backs Senator Sanders or Vice President Biden could vote for any of the Democratic alternatives.  And undecided voters have, in effect, decided not to vote for Hillary.   As the debates loom, when Sanders and the others will showcase their candidacies, the erosion in Hillary's support will likely continue and even accelerate.  Look for her to be under 50% in the post-debate polls, no matter how well she does.

At this point, there is a reasonable chance that she may not win Iowa or New Hampshire.

The Democratic Party will fly into a panic at the prospect of Bernie Sanders walking away with the nomination, just as they did in 2004 when fellow Vermonter Governor Howard Dean showed momentum in Iowa.   The key Democratic operatives -- Kennedy and Clinton people -- hustled to John Kerry's side to head off the Dean offensive.  John Edwards, the third candidate, was pushed off to the side.   Dean cracked under the pressure.

But Sanders is less likely to crack.  His national experience spans several decades.  And Hillary has only a very limited capacity to recover.  Her massive credibility problems have essentially taken away her ability to speak.  She can say what she wants, but nobody believes her.  Even when she takes issue positions, voters realize that she is flip flopping in the heat of the primary and will probably say something contrary next month.

So the search for a real alternative nominee in the party will intensify, driven not only by Hillary's downturn, but by the danger of Bernie Sanders as well.

Elizabeth Warren? Some other candidate? Biden? We'll see.
Posted by Diane Sori at 12:25 AM No comments: