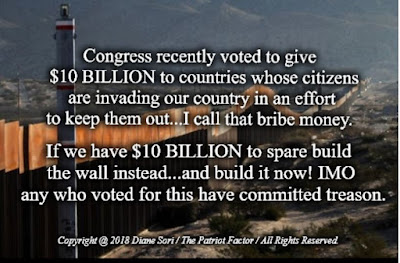 Posted by Diane Sori at 1:32 PM No comments:

We The People Will Fund The Wall

• My name is Brian Kolfage, I have a verified blue check facebook page as a public figure and I’m a Purple Heart Recipient triple amputee veteran.

It’s just a technical problem, right? All I have to do is secure my account with two-factor authentication, right? Sure, except I did that when Facebook blocked Jihad Watch in September, and all seemed to be well. A Facebook operative repeatedly assured me at that time that there was no silencing of dissenting voices going […]
Read in browser Â»

The judge has run amok. This is the same judge presiding over the Flynn case which, just this week, devolved into a “fiasco.”


Well, that was bizarre. We’re referring to the fiasco Tuesday of what was supposed to be the sentencing of Michael Flynn. The sentencing was postponed until next year, but not before federal Judge Emmet Sullivan damaged his own reputation with an extraordinary public attack on the former national security adviser for a crime he’s not been charged with or admitted to.

Mr. Flynn pleaded guilty a year ago to a single count of lying to the FBI. Yet after being assured that the former three-star general is sticking with his plea, Judge Sullivan unloaded on the defendant over his supposed violation of the Foreign Agents Registration Act, or FARA.