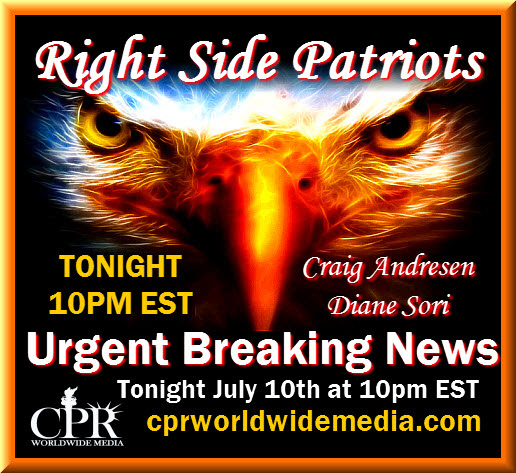 As many of the readers of this blog know, Diane Sori of The Patriot Factor and I are partners on RIGHT SIDE PATRIOTS, our radio show on CPR Worldwide Media  and a few months ago, between our two blogs and our show, we exposed the truth regarding Benghazi.

Since then, RIGHT SIDE PATRIOTS and CPR have been targeted by the Obama regime. Repeated attempts have been made to knock of off the air with cyber attacks coming from the east coast to the west coast…the middle of a farm field in Kansas and even from a point 420 miles due west of the coast of Spain in the Atlantic Ocean.

The CEO of CPR has had his tires slashed and his vehicle further vandalized and a note left on it warning our CEO, Michael Collins-Windsor to “stop the investigative reports or next time it won’t just be your tires getting slashed.”

The surveillance tapes from that event were taken from local law enforcement by two FBI agents days later.

The owner of the company that licenses CPR for the ability to legally play music had two FBI agents show up at his HOME at 8:30pm on a Saturday ordering HIM to PULL THE STREAMING LICENSE in an attempt to close CPR down. He was reportedly threatened, told to shut the ‘F’ up and do what he was told or he would lose his business.

That, by the way, was NOT the only time he was told by the FBI to shut CPR down.

It was at that point that both Diane and I were labeled by that particular duo of being “potential threats to national security.”

Two FBI agents then showed up at Collins-Windsor’s bank demanding his records but were turned away as they did NOT have any court order to take those records.

Two men showed up one day at Collins-Windsor’s office where they took photos of the building.

Are you starting to get the picture here?

Click on link to read entire article and get link into show: http://www.thenationalpatriot.com/2014/07/10/urgent-regime-gone-rogue-america-in-the-balance/
Posted by Diane Sori at 9:16 PM 5 comments:

The Obama administration is attacking Israel as Hamas rockets rain down on the tiny Jewish state.

In denying Israel’s sovereignty they are flouting international law. Is Caroline Glick explains in her book, “The Israeli Solution: A One-State Plan for Peace in the Middle East”: “Except during periods when he was physically barred from doing so — most recently during the Jordanian an occupation of these areas from 1949 to 1967 — Jews have lived in Judea and Samaria from time immemorial, just as they have lived in the rest of the historic land of Israel for the better part of 4000 years. Based on this historical connection, in 1922 the League of Nations granted the Jewish people sovereign rights to Judea and Samaria and the rest of Israel.

On May 15, 1948, the day the Jewish state declared independence, Jordan joined Egypt, Syria, Lebanon, and Iraq in invading Israel with the intent of annihilating it. Jordan ended the war in possession of northern, souther, and eastern Jerusalem as well as today and Samaria. Under international law, this was an illegal war of aggression. All Jews who had been living in the areas that the Jordanians conquered were expelled from their homes hundred for massacred or taken captive in Jordan. The official position of the Israeli government is that Israel has a right to sovereignty over the areas.”

The San Remo Conference was attended by Great Britain, France, Italy, and Japan- with the United States as a...

Border Agent Spokesman: Flood of Immigrants Will End Up Staying

The thousands of people flooding the U.S. border will eventually be granted amnesty to stay, says Gabe Pacheco, spokesman for the National Border Patrol Council in San Diego.

Appearing on "America's Forum" on Newsmax TV on Tuesday, Pacheco said the children, mostly from Central America, will be absorbed into the population and it will morph into a form of "de facto amnesty" that leads to chain migration.

"Even if they come to amnesty or asylum, they've crossed the border illegally already," Pacheco said.

"They've broken the law. Yes, there's going to come some time and point where the administration is going to have to say, yes, we're going to have to give these people amnesty out of necessity. And then you'll have the families come up with those children who are already here and have established residency."

Because the Border Patrol in Texas is so overwhelmed, every 72 hours the government sends groups of 140 people, mostly women and children, to San Diego, Pacheco said, adding that there is no end in sight.

"We don't know when it's going to stop; that's just part of the process right now," he said.

The job of looking after all of the illegal children is so vast that drug cartels and others are getting into the United States because there is no one at the border to stop them, he added.

"Agents aren't there to deal with it because they're inside processing, changing diapers, or doing something else," Pacheco said. "They're doing basic administrative duties as opposed to actually the law enforcement duties that they are sworn to do."

Additionally, agents are fearful of contracting a disease from one of the migrants, though they take numerous precautions to mitigate the chances.

"Some of them do have scabies," he said. "Some of them even have active tuberculosis. There's one confirmed case of the swine flu, which is the H1N1."

He expressed dismay that the Obama administration is requesting more than $3 billion to care for all of the children coming in illegally rather than to stem the tide and seal the border.

"The American people are going to foot that bill specifically for the care of these children," he said.

"My question is, why aren't they putting that $3 billion within Border Patrol to their jobs on the ground to stop these people from coming across?

In an interview on Tuesday with "The Steve Malzberg Show'' on Newsmax TV, Rep. Ted Poe of Texas said immigration officials have inexplicably restricted lawmakers who have wanted to visit the detention facilities where the children are being warehoused.

"You can't take any photographs, no voice recording, you can't do anything except look around. What are they hiding? Why won't they let Congress see what has occurred on the border?''

Pacheco, who also spoke with Malzberg in a separate interview, said he saw no good reason for the shroud of secrecy.

"There's nothing there to be hidden, there's nothing in there that would say, hey, you know what, [this is] out of the ordinary,'' he said.

"[There's a] temperature-controlled environment . . . running water . . . toilet facilities, we feed them. In fact, [in] some of the places, the doors are open so that these kids can run around if they want to in our custody.''

WMDs? I thought there were no WMDs in Iraq? The Iraqi government has informed the United Nations that it has lost control of a former chemical weapons depot to Islamist insurgents affiliated with ISIS, or IS, and cannot carry out its obligations to destroy what’s stored in the compound.

Reuters  In a letter penned by Iraq’s UN Ambassador Mohamed Ali Alhakim, it was revealed that “armed terrorist groups” took over the Muthanna complex on June 11. Located north of Baghdad, the facility was the main center for chemical weapons production prior to the 1991 Gulf War, and is still home to 2,500 rockets containing the lethal nerve agent sarin.

According to the Associated Press, the compound is now in the hands of the Islamic State extremist group, also known as the Islamic State of Iraq and Syria (ISIS). In the letter to UN Secretary General Ban Ki-moon, Alhakim said that Iraqi officials witnessed the intruders looting some of the equipment before the surveillance system was taken offline.

As RT reported previously, ISIS’ rapid gains through northern and western Iraq – the militants also control portions of Syria – have led it to shed part of its name and declare the territory under its control to be a new Islamic state, or caliphate. The group is primarily composed of radical Sunni Muslims, and has won support among those in Iraq disgruntled with the exclusive nature of Iraq’s Shia-dominated central government.

Until the Iraqi government can recover control of the Muthanna facility and stabilize the country’s security situation, Alhakim said it cannot make progress in eliminating the leftover chemical weapons stockpile. Alhakim’s letter to the UN highlighted two specific bunkers when referring to the compound’s capture, the contents of which were revealed by the AP via a 2003-era UN report.

In Bunker 13 were 2,500 sarin-filled chemical rockets – all produced before 1991 – and 180 tons of the“very toxic chemical” sodium cyanide. Bunker 41, meanwhile, contained 2,000 empty artillery shells that were contaminated with mustard gas, more than 600 one-ton mustard containers holding residue, and severely contaminated construction material. These could not be used for warfare, but they are still“highly toxic.”

When the Iraqi government will be able to regain control of the chemical weapons depot also remain unknown, as lawmakers are still debating over what kind of government to form in order give themselves the best opportunity to unite the country and strike back against the Islamic State militants.


Maybe they are coming in from Syria? After all, Saddam Hussein shipped all his WMDs to Syria before the U.S. invasion.


Assad has been moving chemical weapons to Lebanon and Iraq