Al Qaeda Leader’s Chilling Warning to the US: ‘The Battle’ Will Be ‘Transported to the Hearts of Your Own Homes’
Pamela Geller / Atlas Shrugs

No worries, my fellow Americans, Obama assures us that al Qaeda is on the run.
Where they are running is a whole other matter.
The JV team strikes again!


“Al Qaeda Leader’s Chilling Warning to the West: ‘The Battle’ Will Be ‘Transported to the Hearts of Your Own Homes’” By Doug Urbanski, September 28, 2014

BEIRUT (AP) — The leader of Al Qaeda’s Syria affiliate vowed Sunday that his group would “use all possible means” to fight back against airstrikes by the U.S.-led coalition and warned that the conflict would reach Western countries joining the alliance.


BEIRUT/MURSITPINAR Turkey (Reuters) – President Barack Obama has acknowledged that U.S. intelligence underestimated the rise of Islamic State fighters in Iraq and Syria, where the head of an al Qaeda branch warned militants will attack the West in retaliation for U.S.-led air strikes….

U.S.-led air strikes overnight hit a natural gas plant controlled by Islamic State fighters in eastern Syria, a monitoring body reported, part of an apparent campaign to disrupt one of the fighters’ main sources of income.

The monitoring group, the Syrian Observatory for Human Rights, said planes also struck a grain silo in northern Syria killing civilians. This could not be immediately confirmed.

Of course. Strikes against jihadis always kill innocent civilians. The “Palestinians” have taught us that.


U.S.-led strikes have so far failed to halt an advance by fighters in northern Syria on Kobani, a Kurdish town on the border with Turkey where the past week’s battle caused the fastest refugee flight of Syria’s three-year civil war….

The head of Syria’s al Qaeda branch, the Nusra Front, a Sunni militant group which is a rival of Islamic State and has also been targeted by U.S. strikes, said Islamists would carry out attacks on the West in retaliation for the campaign.

“Muslims will not watch while their sons are bombed. Your leaders will not be the only ones who would pay the price of the war. You will pay the heaviest price,” Abu Mohamad al-Golani said in an audio message posted on pro-Nusra forums….

Obama has worked since August to build an international coalition to combat the fighters, describing them last week in an address to the United Nations as a “network of death”.

His acknowledgment in an interview broadcast on Sunday that U.S. intelligence had underestimated Islamic State offered an explanation for why Washington appeared to have been taken by surprise when the fighters surged through northern Iraq in June.

The militants had gone underground when U.S. forces quashed al Qaeda in Iraq with the aid of local tribes during the U.S. war there which ended in 2011, Obama told CBS’s “60 Minutes”.

“But over the past couple of years, during the chaos of the Syrian civil war, where essentially you have huge swathes of the country that are completely ungoverned, they were able to reconstitute themselves and take advantage of that chaos.”

Some of the U.S. president’s opponents at home have seized on a remark he made in January using a sports metaphor to dismiss Sunni militants in Iraq and Syria. He compared them to a low-level school basketball team posing as professionals.

Posted by Diane Sori at 2:01 PM No comments:

May She Rest in Everlasting Peace
By: Diane Sori

This is Colleen Hufford, the 54-year old grandmother beheaded in Oklahoma. No one in the media seems to be showing her picture, yet the media has NO problem repeatedly showing ad-nauseum a picture of the murdering jihadi bast*d taken years ago instead of the way he looks today...in his muslim garb that is.

Another reason they are NOT showing her picture is because now her murder also becomes a black on white crime, and we know the media NEVER reports on that even though reverse racism perpetrated by the race-bating friends of this administration sadly runs rampant in our America today.

And while they are trying to deem Colleen's murder as 'workplace violence' we know the truth...we know the sad truth about an innocent woman who NO longer walks among us because of a president who has let the infiltration of America move forward while he closes his eyes to the enemy now amongst us.

Rest in Peace dear Colleen...you will be remembered.

North Korea: Update: North Korean media reported on 26 September that Kim Jong Un had a health problem that made him feel "uncomfortable" and so missed the session of the Supreme People's Assembly last week. The report did not elaborate on Kim's health, as is customary.
Comment: The best open source information is that Kim has gout and has gained a lot of weight.

Afghanistan: On Saturday, the deputy governor of Ghazni Province in eastern Afghanistan claimed victory against a Taliban attack in his province. Deputy governor Mohammad Ali Ahmadi said, "Afghan soldiers, police and commandos have launched clean-up operations against the militants in Ajristan….The Taliban militants were holed up, using civilian houses as shelters. They were driven out and are being beaten back," Ahmadi said.

Comment: The deputy governor failed to mention that NATO air support was essential to the rescue operation.

Last week a force of 700 Taliban overran Ajristan District, Ghazni Province. Provincial authorities reported they lost contact with the administration and police building in the district. The Taliban killed 100 people and decapitated at least 12 civilian captives before the rescue operation. Yesterday, angry villagers captured and hung four Taliban fighters in retaliation for the beheadings.

Comment: Ghazni Province has strategic importance because the main highway from Kabul to Kandahar runs through Ghazni City, the provincial capital. Ajristan has no strategic importance based on geography or economy. It is the western-most district (comparable to a US county) of Ghazni. It is sparsely populated and mountainous.

The attack is significant for several reasons. Ajristan is the fifth district that the Taliban tried to overrun and occupy since early summer. That means their offensive goals continue to include seizing and holding territory. In each instance, the Taliban have shown they can assemble and support for at least a week a battalion-size fighting force. Had the rescue operation failed, then Ajristan would assume great significance as a measure of the limits of government control.

Nevertheless, all five operations ended in failure. Local forces could not prevent being overrun, but the Taliban attackers could not hold ground. For one thing, after 13 years of fighting, the Taliban still have no air defense equipment they are willing to use. Secondly, the villagers in some areas are tired of fighting.

The most ominous feature of the Ajristan attack is that the Taliban leaders adopted the practice of beheading. That is an export from the Islamic State of Iraq and the Levant (ISIL). It also suggests that Taliban leaders might feel pressure to stay competitive with ISIL in demonstrations of extreme Islamic practices.

Some Taliban fighting groups reportedly have declared their allegiance to ISIL. If that impulse spreads, it could threaten to transform the Afghanistan fighting from a Pashtun war against the central government into an extension of a Pan-Sunni Islam movement that ignores Mullah Omar and his Quetta Shura (council). What does the International Security Assistance Force (ISAF) do if Omar loses control and the Taliban fighters switch loyalty to ISIL?

AP News via Townhall.com
UNITED NATIONS (AP) — In a blistering speech to the United Nations, Israeli Prime Minister Benjamin Netanyahu warned on Monday that Hamas and the Islamic State group are "branches of the same poisonous tree," both bent on world domination through terror, just as the Nazis were.
Netanyahu also lashed back at Palestinian President Mahmoud Abbas, who accused Israel last week of carrying out war crimes and waging a "war of genocide" during the fighting in Gaza. Netanyahu said Hamas committed "the real war crimes" in Gaza by using Palestinian civilians as human shields.

Addressing the U.N. General Assembly's annual ministerial meeting, the Israeli leader argued that Israel's fight against Hamas and the U.S. military campaign against the Islamic State are part of the same cause — the defeat of Islamic extremism.

Netanyahu railed against world leaders for simultaneously condemning the Jewish state for its war with Hamas and praising President Barack Obama for attacking Islamic State militants and other extremists in Syria and Iraq.

"They evidently don't understand that ISIS and Hamas are branches of the same poisonous tree," the prime minister said, referring to the Islamic State group by one of its acronyms. He added: "When it comes to its ultimate goals, Hamas is ISIS, and ISIS is Hamas."

Netanyahu said ISIS and Hamas, as well as other Muslim extremist movements, from al-Qaida and Nigeria's Boko Haram to Somalia's al-Shabab and Lebanon's Hezbollah, share the goal of imposing militant Islam on the world. He likened them to "another fanatic ideology that swept into power eight decades ago" — Nazism.

To protect global peace and security, he said, "we must remove this cancer before it's too late." 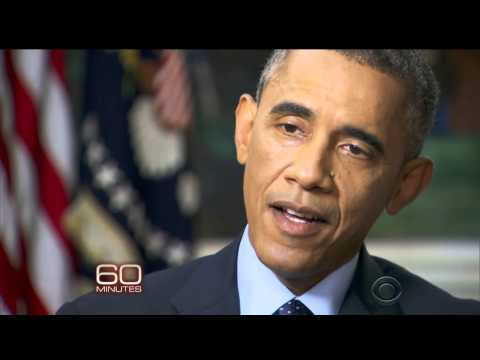 “The president’s commander in chief and he’s the one who takes responsibility for ensuring that we have the kinds of policies in place that are required to protect our interests around the globe,” Earnest said in response to questions about remarks Obama made in a “60 Minutes” interview that aired Sunday.

Obama had said, “I think our head of the intelligence community, Jim Clapper, has acknowledged that I think they underestimated what had been taking place in Syria.”

The president’s comments set off a firestorm of controversy among GOP lawmakers and some members of the intelligence community, who have argued that Obama should blame himself for failure to act on information provided.

“I very much doubt that the intelligence community was asleep at the switch while [ISIS] was gaining strength in Syria,” former State Department special adviser on Syria Frederic Hoff told The Telegraph. “None of this was exactly hidden from view.

“No doubt President Obama and his advisors were perplexed when it came to policy options, and no doubt the scope and speed of the [ISIS] thrust into Iraq were surprising. But I doubt that the U.S. intelligence community is to blame for any policy shortfalls.”

“Every president in history had made a mistake, acknowledged it and then moved on. President Reagan with Iran contra, President Clinton in Bosnia, President George W. Bush after the debacle in Iraq, when he started the surge – but it doesn’t seem to be in this president’s DNA,” he told Fox News.

As reporters pelted him with questions about the president’s refusal to admit his administration’s failures in the Middle East, Earnest turned the tables to attack Republicans who have said that U.S. boots on the ground may become an unavoidable reality in the fight against ISIS.

House Speaker John Boehner said of ISIS Sunday, “At the end of the day, I think it’s gonna take more than air strikes to drive them outta there. At some point somebody’s boots have to be on the ground.”

But it isn’t just Republican lawmakers who foresee U.S. troops fighting ISIS on the ground in Iraq and Syria.

In a NBC News/Wall Street Journal/Annenberg poll released over the weekend, 72 percent of respondents said that they believe the U.S. will end up using boots on the ground in Iraq and Syria despite the Obama administration’s repeated promises that troops will not be deployed in a combat capacity.

The results of that poll were exaggerated Monday with reports that ISIS fighters are reportedly staging roughly one mile outside of Baghdad even though U.S. airstrikes were supposed to keep the fighters from reaching the city.