Op-ed:
Proof That Israel...That Jerusalem...Belongs Solely to the Jews
By: Diane Sori / The Patriot Factor / Right Side Patriots on American Political Radio 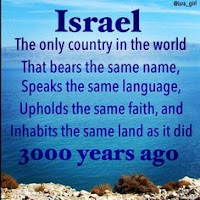 This is HUGE folks....a recently announced find should put an end to any muslim claim to Jerusalem once and for all. A small piece of papyrus appearing to be the oldest non-biblical Hebrew-language (note the words 'Hebrew language') reference to Jerusalem was recovered from antiquities robbers who found it in a cave in the Judean desert.

The inscription on it reads, “From the king’s maidservant, from Na’arat, jars of wine, to Jerusalem"...and it has been dated to the seventh century B.C.

This info in full appears in the 'Top 10 Important Religious Finds of 2016' in christianity.com a highly respected website so it is NOT hearsay nor is it so-'called' fake news although the media will try to deem it so.

So as 70 nations...70 members of the U.N...have said that on January 15, 2017...a mere five days before Obama leaves office...they intend to gather in Paris to 'discuss' the future of Israel...meaning their 'discussion' will form the basis for a two-state solution that will, faster than in a blink of an eye, become a U.N. Security Council resolution to permanently divide Israel and create a Palestinian state. And we all know this will NOT bring peace to the region as it will only make matters worse by putting the enemy NOT on Israel's doorstep but within Israel herself.

Translation: the U.N. will once again say 'screw you' to Israel by taking precious land away from the Jewish state to create a homeland for a people who do NOT exist and have never existed, but who have continuously caused problems ever since Yassir Arafat invented them back in the 1960's to further the agenda of and do the dirty work for the PLO.

And Barack HUSSEIN Obama will sit back, put his feet up on the Resolution Desk, and smile the smile of the devil himself for he will have completed a major part of his mission...destroy Israel once and for all as the caliphate gobbles up the land of God's chosen people...unless Benjamin Netanyahu and the IDF put an end to this nonsense once and for all.

And that would be the best thing of all NOT just for Israel but for all our sake.

MADISON, Wis. — The federal agency accused of widespread misconduct and whistleblower retaliation at several of its offices is now attempting to create an organizational culture built on several ethical pillars.

Last month, the Social Security Administration’s Office of Disability Adjudication and Review began a “conversation” with employees about the kind of culture the agency wants to promote in 2017.

Facilitators of that conversation have gotten as far as forming a “word cloud” of principles in slide show format, according to an internal email obtained by Wisconsin Watchdog.

“Together, we have identified themes like; Service, Respect, Quality, Trust, Professionalism, Fairness, and Responsiveness, as the culture we want in ODAR,” the email states. “As you can see, public service is more than just providing an answer.  It’s how we serve people and their families during some of the most difficult times in their lives.”

Under the agency’s new “culture statement,” ODAR employees will have the following expectations of conduct:

“It also has come to light that Kerry held a meeting in December with senior Palestinian diplomat Saeb Erekat. Documents believed to have been leaked by Egypt confirm that Kerry and Erekat discussed forwarding the resolution, a charge that senior White House officials continue to deny.”

The Obama administration will leave behind a long, long record of dishonesty and betrayal.

“White House On Defense After Being Exposed as Architect of Anti-Israel U.N. Action,” by Adam Kredo, Washington Free Beacon, December 29, 2016:

Senior Obama administration officials are scrambling to provide explanations after multiple reports, including in the Washington Free Beacon, identified the White House as being a chief architect of a recent United Nations resolution condemning the state of Israel, according to conversations with multiple former and current U.S. officials.

Email ThisBlogThis!Share to TwitterShare to FacebookShare to Pinterest
After a very bloody six-year-long civil war, Vladimir Putin announced on Thursday that Assad’s Syrian government and the opposition rebels have agreed to terms for a ceasefire deal and peace talks proposed by Russia and Turkey.

According to Putin, the plan will end hostilities beginning at midnight on Friday. During the civil war, Russia and Turkey have supported opposing sides, but they have agreed to serve as guarantors to the agreement.

However,  terrorist organizations such as ISIS “and the groups affiliated to them” were not part of the agreement.

While meeting with Russia’s foreign and defense ministers Putin said, “Three documents have been signed. The first document is between the Syrian government and the armed opposition on a cease-fire on the territory of the Syrian Arab Republic. The second document is a package of measures to control the cease-fire regime. And the third document is a statement on readiness to begin peace talks on the Syrian settlement.”

Read entire article here: http://pamelageller.com/2016/12/putin-syrian-ceasefire-deal-reached-assad-regime-rebels.html/
Posted by Diane Sori at 9:14 AM No comments:

January 15th: 70 Nations Will Gather In Paris To Discuss The Future Of Israel

On January 15th, representatives from 70 different countries will gather in Paris, France for an unprecedented global conference.  The stated goal of this conference is to promote a "two-state solution" as the way that lasting peace will be brought to the Middle East.

In Israel, there is a tremendous amount of concern that whatever is agreed upon at this conference will immediately be used as the basis for a UN Security Council resolution that would permanently divide the land of Israel and create a Palestinian state.

But things would have to move very rapidly in order for that to happen, because Barack Obama's time in the White House comes to an end on January 20th, and Donald Trump has already made it exceedingly clear that he would never support such a resolution.

The UN Security Council resolution that was passed on Friday was one of the most significant events that we have witnessed in decades.  Resolution 2334 made all Israeli settlements in the West Bank and in East Jerusalem illegal, it set the 1967 ceasefire lines as the border between the Israelis and the Palestinians, and it granted every single inch of East Jerusalem to the Palestinians.
image: http://www.prophecynewswatch.com/images/ads/DTF_Course.jpg
But it stopped short of giving official UN Security Council recognition to a Palestinian state, and that is why this conference on January 15th is so important.
Read more »
Posted by Diane Sori at 8:57 AM No comments: