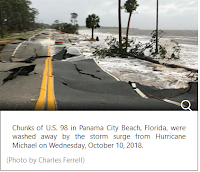 Hurricane Michael is being blamed for at least two deaths, as the storm cuts a path of destruction across the Southeast.

When Hurricane Michael made landfall as a high-end Category 4 storm on the Florida Panhandle Wednesday, buildings along the coast were smashed to pieces, storm-surge flooding lapped at the eaves of beach houses, an Air Force base sustained extensive damage. Two people have died in the storm, which was zipping across Georgia and the Carolinas on Thursday morning.

Read entire areticle and see video here:  https://weather.com/storms/hurricane/news/2018-10-11-hurricane-michael-damage-florida-georgia-alabama-carolina
Posted by Diane Sori at 8:05 AM No comments:

President Trump's agenda as well as lying about his would-be vote for Supreme Court Justice Brett Kavanaugh had he been in senate.
In a roughly 10 minutes long video released on Wednesday night, undercover operatives for James O'Keefe recorded a Bredesen campaign field organizer by the name of Will Stewart calling the people of Tenessee "ignorant" and claiming his candidate only announced support for Brett Kavanaugh because it would be politically expedient.

Read entire article and see video here: https://townhall.com/tipsheet/timothymeads/2018/10/10/project-veritas-catches-phil-bredesdens-staffers-admitting-fake-kavanaugh-suppor-n2527386
Posted by Diane Sori at 7:53 AM No comments:

Google’s burying of material critical of Islam, along with Facebook, Twitter, and YouTube censorship of material that violates Sharia blasphemy laws, show that the “official Google source” that said that “the document should be considered internal research, and not an official company position” was lying. This is already being implemented on a massive scale. If […]
Read in browser » 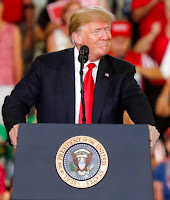