Defying exceptions of the Obama Administration to cut back on nuclear their industry, the Islamic Republic of Iran is expecting to receive 149 more tons of natural uranium, the fuel used to sustain heavy-water-reactors and nuclear weapons.

This transaction will increase the country's stockpile 60 percent more than before the so-called "Iran deal" took place in 2015.  The highly potent material can be stored for decades, considering the potential uses once restrictions on nuclear activities expire.

Oversight power has been largely relinquished from the United States.  Now, the InternationalAtomic Energy Agency is responsible for supervising Iran's rapid accumulation of nuclear materials.

Posted by Diane Sori at 3:04 PM No comments: 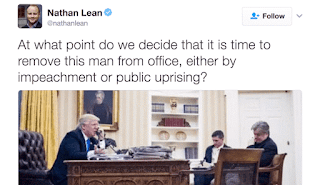 Georgetown’s Nathan Lean is a supreme example of how academia has become a radioactive desert of hard-Left indoctrination and opposition to the freedom of speech. He is supposedly an expert on “Islamophobia,” which really means that he is an expert on character assassination of those whom he deems “Islamophobes.” A longtime foe of the freedom […]

Read in browser »
Posted by Diane Sori at 2:46 PM No comments:

President Donald Trump on Sunday maintained that voter fraud is still a major issue though he has not provided evidence to back up the claim, saying "many people have come out and said I'm right."

"We can be babies, but you take a look at the registration," Trump said during an interview with Fox News' Bill O'Reilly that aired before the Super Bowl. "You have illegals, you have dead people, you have this. It’s really a bad situation. It's really bad."

Trump also repeated his promise to investigate voter fraud, saying he would put Vice President Mike Pence in charge of a commission to look at the issue carefully.
Trump has repeatedly said that 3 million people voted illegally in the November 8 presidential election.

Trump, who was spending the weekend at his Mar-a-Lago resort in Palm Beach, Florida, captured the presidency by winning enough of the state-by-state Electoral College votes to defeat Democrat Hillary Clinton.

Email ThisBlogThis!Share to TwitterShare to FacebookShare to Pinterest
“Islamic Republic of Iran: ‘We Are the Strongest Power… America Should Be Careful!,'” by Justin Holcomb, Town Hall, February 2, 2017:


The Islamic Republic of Iran is becoming blatantly hostile towards the United States.

Ali Akbar Velayati, the man who advises Ayatollah Ali Khamenei, made it clear on Thursday that Iran has no plans of slowing down its nuclear program and threatened the United States if any further actions are taken.

The aide to Iran’s supreme leader ripped an “inexperienced” President Donald Trump and assured the world that his country would continue ballistic missile testing.

“This is not the first time that an inexperienced person has threatened Iran,” Velayati said. “Iran is the strongest power in the region and has a lot of political, economic and military power … America should be careful about making empty threats to Iran.”

“Iran will continue to test its capabilities in ballistic missiles and Iran will not ask any country for permission in defending itself,” he said.

President Trump has released several messages over the past 24 hours, including a message that put Iran “on notice.”….

Posted by Diane Sori at 2:13 PM No comments:

Email ThisBlogThis!Share to TwitterShare to FacebookShare to Pinterest
Op-ed:
And the Media Remains Silent
By: Diane Sori / The Patriot Factor / Right Side Patriots on American Political Radio

Last night was Super Bowl 2017 and congratulations must go out to the New England Patriots 5th Super Bowl win. Lead by Tom Brady, the Pats came back from a 25 to 3 deficit to win it all. And the Atlanta Falcons must also be congratulated for while they did not win, they played one hell of a game.

And while some of the Super Bowl ads were quite anti-Trump in nature, especially in regards to his recent rightful banning of those from seven countries from coming here for 90 days...one stood out in my mind as being the most grievous of all...the ad by '84 Lumber' which made heroes out of a mother and son's journey of ILLEGALLY coming here. Shameful to say the least as coming here ILLEGALLY is a crime in and of itself.

And surprise of all surprises was that uber liberal Lady Gaga who many in the media reported would go 'political' but who instead did what she does best...entertain...put on one hell of a halftime show sans political references. And thank you to her for that.

But while all this was going on a half a world away all hell was breaking lose as a state of emergency was being declared in Saudi Arabia. And why...because unreported then and still unreported by our media was a report from Yemen's official news agency...Yemen News Agency (SABA)...that quoted a Houthi spokesperson who said that on Sunday night a Yemeni rebel missile reportedly hit a Saudi military camp 40-kilometres west of Riyadh, the capital of Saudi Arabia, in retaliation for the Saudis aggression against Yemen...aggression consisting of air strikes on the Majz district of Sa'ada province, on the al-Tuhitah district of Hodeida province, as well as on the Serwah district of Mareb province...air strikes that killed numerous Yemeni civilians including children.

And while this story was picked-up by news agencies all across the Middle East and India, and even by some Russian news agencies, it still has been kept mum from both European and U.S. media outlets...kept mum except by bloggers like me.

Also being kept quiet by our media is that in addition to the Yemeni missile being fired at the Saudis, earlier in the day the German newspaper 'Die Welt' reported, as per unspecified intelligence sources, that also on Sunday Iran tested a cruise missile called 'Sumar'...a missile that is capable of carrying a nuclear weapons payload.

And this followed Iran's earlier in the week test-firing of a medium-range ballistic missile...a test-firing that is in violation of U.N. Resolution 2231...a resolution passed a few days after the signing of the JCPOA (Obama's 'very bad' nuclear deal with Iran), warning Tehran not to conduct ballistic missile tests for the next eight years.

And there's more unreported by our media such as the fact that ISIS has 'activated' terror cells in Egypt's Nile Valley. Reported in Asharq Al-Awsat...a pan-Arab daily newspaper... the report, as per local Egyptian officials, highlights the ongoing flow of huge sums of money to fund terrorist operations in Egypt, done in conjunction with the revival of the Takfiri movement...a 1960's born movement of radical islamists tied directly into the Muslim Brotherhood...known terrorist supporters and outright terrorists themselves.

Finally, for now at least, another recent event unreported by our media is that our 'supposed' ally Saudi Arabia recently announced their condemnation of what they call Israel's "illegitimate settlement activities" in the occupied Palestinian territories. But to make their announcement even more grievous is their addition that only the Palestinians have the right to the city of Jerusalem, emphasizing what they call the "centralization of Jerusalem," as the Palestinians right for the full sovereignty over Jerusalem as the capital of the State of Palestine. And their announcement concluded with the words that they will work towards that goal...work towards a goal we vehemently oppose.

So while we revel over a game and a singer doing the right thing, the Middle East is on the brink of all-out war...a war that we will be forced to take sides in. Us being on Israel's side is a given, but with our 'supposed' ally Saudi Arabia siding against our true ally Israel, and with Saudi Arabia now being fired upon with scud-type missiles by Iran-backed Yemen, the Saudi situation will indeed become quite the conundrum...a conundrum we surely do not need.

So when will our media wake-up to the fact 'We the People' need to know the facts about what we are facing...as in the possible start of a full-blown Middle East war...a war that we will be part of...and not just as advisers or special ops...whether the liberals amongst us like it or not for if the Middle East falls the enemy will come for us next. And right now it seems that with the media being the way it is we will only find that out as the enemy shows up full-force on America's shores.

Sad isn't it, but as the saying goes, 'reality hurts.' And with our leftist-controlled media playing into...if not outright supporting...America's enemies that reality does hurt...and my friends it will only get worse...much much worse.