RIGHT SIDE PATRIOTS...for those who missed last night's show (or just want to listen in again) where Craig Andresen and Diane Sori discussed 'Pulling the Knife Out of Israel's Back'; 'Quantum Shift Rising - Democrats on the Edge of the Abyss'; and important news of the day...you can listen to it (and previous shows) at your convenience on our PodBean hosting/archive site. Click here: https://rightsidepatriots.podbean.com/ to go directly to our podcasts and hope you become 'followers' of RIGHT SIDE PATRIOTS. And our podcasts are now also on Spotify at: https://tinyurl.com/y76xxz8q 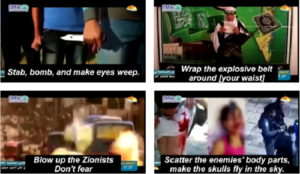 Hamas lies habitually. It initially stated that “the rocket launched from Gaza that leveled a private home in central Israel on Monday was a mistake and that Hamas had ‘no interest’ in firing projectiles at Israel.” Meanwhile, while Hamas was busy “launching missiles at Israel’s civilian population….Hamas’ Al-Aqsa TV was broadcasting calls to murder Israelis.” […]
Read in browser »

People's Pundit Daily reports that March is shaping up to be a stellar economic month and that most households since 1966 are reporting income gains.

Likewise, "consumer confidence rebounded in March to 98.4 from last month’s 93.8, slightly above the average of 97.2 recorded in the past 26 months."

Email ThisBlogThis!Share to TwitterShare to FacebookShare to Pinterest
Obama to genocidal Jew-hater Rashida Tlaib: “I’m proud of you”

Jihadi Rep. Tlaib posts a photo of her with Obama.” “I’m proud of you,” says Obama to Tlaib. The woman s a genocidal Jew-hater. Imagine if President Trump was photographed with David Duke?

The reaction from the media would have been violent. However, the mainstream media has consistently given Obama a pass for embracing some of the most vicious and vile of racists and demagogues from the left.

“The best part was when he looked straight at me and said, “I’m proud of you,” says Tlaib of Obama. What is Obama proud of? Is it that Tlaib is an open anti-Semite? Is it Tlaib’s hatred of Israel and her support of the BDS Movement? Is it Tlaib’s support for Hezbollah and Hamas?

Posted by Diane Sori at 8:53 AM No comments: