The world’s most powerful new space rocket blasted into the heavens above Florida’s east coast on Tuesday afternoon on a trailblazing deep-space mission that Elon Musk, founder of the private aerospace company SpaceX, believes could spell “game over” for his commercial spaceflight rivals.

The Falcon Heavy, which will provide the United States a heavy-lift capability in space not seen since the Saturn V rockets of the Apollo era, made a flawless ascent through clear blue skies, with at least two of its three reusable boosters returning safely to earth.

The spectacular, flame-heavy launch was watched by an estimated half-million spectators who packed the beaches and other key vantage points around Florida’s space coast for the biggest fireworks show since the retirement of Nasa’s space shuttle fleet in 2011.

Email ThisBlogThis!Share to TwitterShare to FacebookShare to Pinterest
Right Side Patriots...for those who missed last night's show (or who just want to listen in again) where Craig and Diane discussed the FISA memo in detail, and important news of the day...you can listen to it at your convenience on SoundCloud at:
https://soundcloud.com/right-side-patriots-260798913/rsp-arch-2-6-18

Posted by Diane Sori at 9:41 AM No comments:

Rep. Paul Gosar (R-AZ) defended remarks he made last week calling for the Capitol Police to arrest any illegal aliens in attendance at the State of the Union address after members of the Hispanic Caucus tried to pass a resolution in the House Tuesday condemning him for his comments. The House voted 231-187 along party lines to kill the resolution.

Rep. Michelle Lujan Grisham (D-NM), chairman of the Hispanic Caucus, authored the resolution which condemned Gosar’s “inappropriate actions that intimidated State of the Union guests and discredited the U.S. House of Representatives.”

“So you want to condemn my free speech, @RepLujanGrisham?” He tweeted in reply along with a statement defending his remarks. 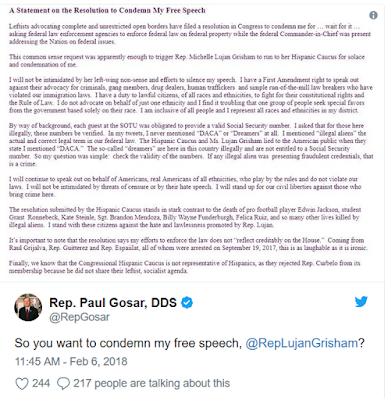 “I will not be intimidated by her left-wing non-sense and efforts to silence my speech,” Gosar wrote.

“I have a First Amendment right to speak out against their advocacy for criminals, gang members, drug dealers, human traffickers and simple run-of-the-mill law breakers who have violated our immigration laws.”

Gosar asked the Capitol Police and Attorney General Jeff Sessions last week to consider “checking identification of all attending the State of the Union address and arresting any illegal aliens in attendance.”

“Of all the places where the Rule of Law needs to be enforced, it should be in the hallowed halls of Congress,” he argued. “Any illegal aliens attempting to go through security, under any pretext of invitation or otherwise, should be arrested and depo

Instead of draining the swamp, this is taking a firehose or two and creating more wetlands. “State Dept. Embraces Islamic Cleric Who OK’d Killing Americans in Iraq, Called for Israel’s Destruction,” by Patrick Poole, PJ Media, February 6, 2018: Last Thursday, Sam Brownback was sworn in as the State Department’s new ambassador for religious liberty. […]
Read in browser »

Posted by Diane Sori at 9:18 AM No comments:

This was a major ramping-up of the left’s campaign against Israel: “The Irish Parliament was poised last week to pass a major piece of legislation that would make it crime to engage in trade with Israelis. The bill, which was seen as part of the Boycott, Divestment, and Sanctions movement, or BDS, would have imprisoned Irish citizens who purchased souvenirs in Israel for a maximum of five years and subjected them to a fine of more than $310,000.”

They weren’t just boycotting Israel, they were going to imprison Irish citizens who dealt with Israel — even by buying souvenirs.

This bill was an outrageous crime. Obama would have been applauding. But the Trump administration stepped in: “Trump administration officials are said to have made clear to Irish leaders that passage of the bill would put them starkly at odds with the United States and subject them to inclusion on a list of countries supporting boycotts of the Jewish state.”

Thank Gd, we have an American President now.

Read entire article here: https://gellerreport.com/2018/02/trump-irish-israel.html/
Posted by Diane Sori at 9:13 AM No comments: