Sometimes a cartoon does say it all... 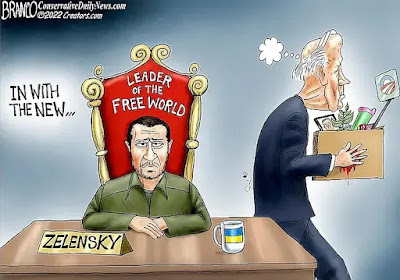 Posted by Diane Sori at 3:44 PM No comments:

Mariana Zlahodniuk spent days trying to persuade her mother, Olena, to get out of Ukraine.

“She wouldn’t come, was adamant in fact,” says Mariana, a 27-year-old marketing and business adviser from Ukraine, based in the Polish capital since 2012.

The pair’s hometown of Zhmerinka, in central-southern Ukraine, is a strategic railway point and the frontline of the Russian invasion is edging closer.

Mariana’s phone calls became more desperate, until, finally, Olena decided to make the hazardous journey to cross the border to safety in Poland.

Olena’s mother, Mariana’s 73-year-old grandmother, meanwhile, is left in their house in the small town. “She calls me every day and tells me to come home and tend to the garden,” Olena adds.

Mariana eventually picked up her mum on the Polish side of the border on 26 February…Read more here.

Posted by Diane Sori at 3:42 PM No comments: