Game Over: Key GOP Senator Will Vote 'No' On New Trump Impeachment Witnesses

Well, that’s the ballgame on new witnesses, folks. Sen. Lamar Alexander (R-TN) had said he would announce his decision on whether he would stain the integrity of the Senate by supporting an unprecedented push for new witnesses in the shoddy and hyper-partisan impeachment push against Donald Trump that’s been executed by congressional Democrats. D.C. has been engulfed by this circus and Alexander was a key vote in whether this soft coup attempt would continue. He finally announced late Thursday night that he’s not going to entertain keeping this circus going any longer.

"I worked with other senators to make sure that we have the right to ask for more documents and witnesses, but there is no need for more evidence to prove something that has already been proven and that does not meet the United States Constitution’s high bar for an impeachable offense," Alexander said in a statement.

Email ThisBlogThis!Share to TwitterShare to FacebookShare to Pinterest
Rasmussen Poll: Trump’s Support Among Black Voters Has Doubled to 42% Since Last Year

In November, two polls found that President Trump’s approval rating among black likely voters had reached 34%. An Emerson poll found that Trump has a 34.5% approval rating among black likely voters and a Rasmussen poll found that number was 34%.Both polls provide an obvious contradiction to the media narrative about President Trump appealing to “racists,” hence why neither got a second of airtime on CNN or MSNBC. 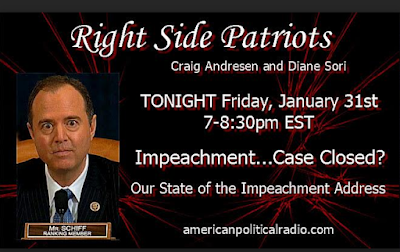