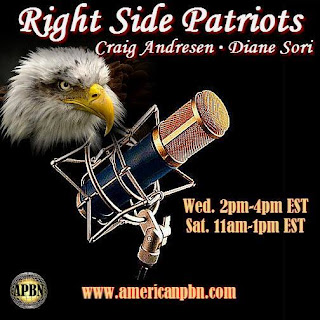 Posted by Diane Sori at 9:04 PM No comments:

“Attempts to impose new sanctions under the pretext of irrelevant excuses show the United States’ continued hostile policies and hatred towards the Iranian nation and its useless attempts to weaken Iran’s defense power, which are not helpful to regional security, stability and tranquility,” said Iran’s Defense Minister. And so Obama helpfully complied with their wishes […]

Pamela Geller, Breitbart News: The Nation That Gave the World the Magna Carta Is Dead

My latest article, just up, over at Breitbart News has certainly struck a chord. It has thousands of comments and it’s only been live a few hours:


“Geller: The Nation That Gave the World the Magna Carta Is Dead”
By Pamela Geller, Breitbart News, January 19, 2016:

I did not expect for one moment that the Brits would ban the U.S. presidential candidate who may very well be the next President of the United States. A nation whose national self-esteem (or what’s left of it) is rooted deeply in its place in history would be infamous for having banned the leader of its closest ally, the one that saved her from the Nazi onslaught.

On the other hand, maybe they will ban Trump. After all, the British government banned me from...

The Pacific Legal Foundation has been denied the opportunity to challenge Obamacare’s individual mandate tax at the Supreme Court.

Last year, the advocacy group questioned the health law’s legality by reminding the justices that any tax-raising bill needs to be introduced in the House of Representatives, per the Constitution. The mandate was introduced in the Senate. SCOTUS, however, has rejected the appeal.


“It is very disappointing that the Court has chosen not to hear this important case, because the justices were being asked to uphold and enforce an important constitutional protection for all taxpayers. At issue was the Constitution’s Origination Clause, which requires all new taxes to start in the House, the chamber closest to the people.  Obamacare is a massive tax bill, but it was launched in the Senate through a procedural ploy.  The Senate’s subversion of the constitutionally mandated rules for tax bills is a danger not just in this case but in future cases as well. By allowing Congress to use procedural tricks to evade the constitutional rules, the Court has opened the door to Congress further evading democratic accountability for the laws it passes.”

Previously, a Washington appeals courts had halted PLF’s momentum by insisting they were misinterpreting the origination clause:


The three-judge panel rejected that argument, saying that under past Supreme Court cases, the origination clause applies only when a law’s “primary purpose” is to raise revenue. Judge Judith Rogers said money collected by the government was a “byproduct” of the law’s effort to encourage participation in the health insurance system.

As Bloomberg notes, this SCOTUS decision all but ensures Obamacare will remain intact at least until the presidential election in November.
Posted by Diane Sori at 1:27 AM 1 comment:

If this early January development was a bombshell, today's revelation is a nuclear bombshell. Hillary Clinton's improper, unsecure email server appears to have endangered national security even more than previously thought -- and her excuses continue to melt away under intensifying scrutiny. Extremely serious findings from the intelligence community's Inspector General, reported exclusively by Fox News' Catherine Herridge:


Hillary Clinton's emails on her unsecured, homebrew server contained intelligence from the U.S. government's most secretive and highly classified programs, according to an unclassified letter from a top inspector general to senior lawmakers. Fox News exclusively obtained the text of the unclassified letter, sent Jan. 14 from Intelligence Community Inspector General I. Charles McCullough III. It laid out the findings of a recent comprehensive review by intelligence agencies that identified "several dozen" additional classified emails -- including specific intelligence known as "special access programs" (SAP). That indicates a level of classification beyond even “top secret,” the label previously given to two emails found on her server, and brings even more scrutiny to the presidential candidate’s handling of the government’s closely held secrets...

Today, Wednesday, January 20th, from 2 to 4pm EST, RIGHT SIDE PATRIOTS Craig Andresen and Diane Sori discuss the need for real leadership regarding ISIS, Obama sells out the U.S. yet again, and Craig goes on another 'snark' attack.

Hope you can tune it at: www.americanpbn.com

And chat with us live at: https://www.facebook.com/groups/cprworldwidemedia/?fref=ts or go directly to 'chat' on our website at: American Patriot Broadcasting network http://www.americanpbn.com 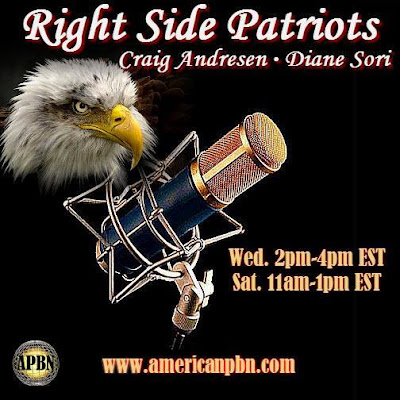