Ivermectin...a commonly used generic drug discovered in Japan in the late 1970s, has now become the stuff of major media fodder. Originally developed and used as a veterinary drug to treat internal and external parasitic infections in both commercial livestock and companion animals, ivermectin was quickly repurposed and adapted to human use after it was proven to inhibit the in-vitro replication of some positive, single-stranded RNA viruses...viruses like malaria, dengue fever, zika, and yellow fever. And now with more than 2.5 billion doses successfully given over the past 30 years, ivermectin not only has an excellent safety record, but has been proven to stop SARS-CoV-2...or Covid-19 as it's more commonly known...dead in its tracks.

In fact, some top doctors and medical research scientists both here in the U.S. and abroad are hailing ivermectin as a “miracle drug”...a broad spectrum inflammation inhibitor so potent and powerful that, according to Pierre Kory, M.P.A., MD, president and chief medical officer of the Front Line Covid-19 Critical Care Alliance (FLCCC), “It can end this pandemic.”

And just recently a group of medical and scientific experts from the above stated FLCCC Alliance...a March 2020 organized medical alliance which includes three U.S. government senior scientists...published in the May/June issue of the “American Journal of Therapeutics,” that the long used anti-parasitic drug ivermectin is both an effective prophylaxis and treatment for COVID-19. And how did these esteemed doctors reach this now obvious but not previously disclosed conclusion...simply by their having gathered previously kept from the public data derived from clinical, in-vitro, animal, and real-world studies along with reviewing previously published but not highly distributed “peer-reviewed studies, manuscripts, expert meta-analyses, and epidemiological analyses of regions” where ivermectin was used as a therapeutic agent and where it showed it was “highly effective against Covid-19.”

Also, it's now come to light that information garnered from 27 randomized controlled trials, 15 of which were WHO (World Health Organization), NIH (National Institute of Health), and EMA (European Medical Agency) trials of over 2,500 patients, were made available for publication in January of this year but were not actually published nor released to the public here in the U.S. until now. And other key findings not released here were meta-analyses of ivermectin that were previously published by expert panels from the UK, Italy, Spain, and Japan...meta-analyses which showed statistically significant reduction in mortality, recovery time, and viral elimination in COVID-19 patients treated with ivermectin along with their having little to no side effects.

And of key importance is the fact that when administered, ivermectin led to “rapid population-wide decreases in morbidity and mortality,” including in highly Covid-19 infected areas of Africa, central Europe, and Mexico. In fact, the countries of South Africa, Zimbabwe, Slovakia, the Czech Republic, Mexico, and India have all approved ivermectin for immediate use by medical professionals. 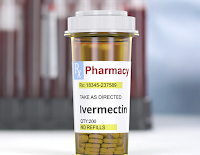 But this information was deliberately kept hidden from us while Fauci and the Democrats kept pushing their inane rhetoric that, “We’ve got to make sure that we get the overwhelming proportion of the population vaccinated,” to which he added that masks must still be worn even after getting what now has become more popularly known as “the jab.” And Dr. Fauci followed that up with words to the affect that "just maybe" by next Mother’s Day vaccinated people can “almost go be back to sort of being free.”

“Sort of being free”...really Dr. Fauci...you and and your Democrat enablers do need to stop lying to the American people and let ivermectin be given to all those now suffering with Covid-19 as well as to those who want to take it as a preventative measure. After all, ivermectin has proven, courtesy of the above hushed up trials, to be way better at halting Covid-19's spread than the vaccines that are continuing to be pushed on the American public. Or is it, perhaps, that Dr. Fauci and his assorted political ne're-do-wells do not want the pandemic to end...what with he personally showing himself to be nothing but a medical version of a liberal activist judge pushing a decidedly liberal activist agenda.

And dare we not forget that Dr. Fauci is also first and foremost a long time Washington bureaucrat who used his position as our nation's top infectious disease specialist to not only lie to “We the People,” but to try and manipulate both our behavior and our reaction to the politically manufactured and media manipulated drama that has sadly become the calling card of Covid-19. And as long as fear holds sway over the masses both his and the Democrats power over the people stays in place... take the fear away, give people hope, and said power will surely start to wane. Even the sheeple and other should know better but don't gullible sorts can only be hypnotized with fear for just so long.

Simply, with ivermectin possibly having...and having for quite some time now...the ability to end this fear driven politically motivated pandemic, Dr. Fauci's silence regarding said drug speaks louder than all his previous rhetoric, lies, and innuendos ever could. And this includes his early on lie told to President Trump regarding not needing to wear face masks at the onset of the pandemic, to his currently saying that we have not yet reached “herd immunity”...the very way by which Mother Nature herself helps temper down viruses and such over a given period of time.

“Herd immunity”...now beginning to take hold in certain areas of our country...is the very thing fear mongers like Dr. Fauci fear most for once “herd immunity” takes hold their power over us drops basically to zero so it's best to keep those two words out of the public discourse. And it's especially critical to do so now that WHO, the very organization that orchestrated the previously stated 27 randomized controlled trials and knew of ivermectin's success record but kept those results from the public, is now suddenly claiming that “current evidence” on the use of ivermectin to treat COVID-19 patients is “inconclusive,” and that until more data is available that ivermectin must only be used in clinical trials. And WHO is doing this while completely ignoring the important fact that ivermectin also has been proven to significantly reduce the risk of folks contracting Covid-19 in the first place.

This leads me to wonder just how gullible Dr. Fauci thinks some of us are for WHO's now flip-flop reaction is surely one of an organization being forced by their string-pulling “powers that be” to do as they are told or else. After all, fear mongering is the stuff of not only big business but of forced manipulative compliance as well. Better to push a vaccine quickly rushed “to market” on a gullible and ever so fearful public than it is to announce a not as profitable “cure”...if you will...all while the “big boys” pockets do get lined once again, big pharma fortunes continue to be made, political power continues to be Democrat party consolidated, and the general population becomes but willingly indoctrinated guinea pigs for a vaccine truly not well tested nor proven to totally work.

Remember, no matter how much Dr. Fauci speaks of the vaccine's effectiveness folks are still coming down with and dying from the nasty little virus from China even after they've been “jabbed.” And why...because these current messenger-based RNA vaccines (mRNA) were in no way tested long enough or carefully enough to fully understand either the safety risks involved or the possible ramifications to one's immune system in the future. And this is in direct contrast to the vaccines currently in use for measles, mumps, rubella, polio, smallpox and influenza, all of which have a long documented history of their being developed and tested over time. But most importantly, these stated vaccines were developed in line with requirements of federal health regulatory agencies...the Covid-19 vaccines currently in use do not appear to be...at least not to the degree they should be.

So while Dr. Fauci keeps heralding the merits of the three currently in use Covid-19 vaccines (the Johnson and Johnson, Pfizer, and Moderna vaccines) all with what I believe to have at least questionable safety records; and as many folks continue to line up for “the jab” while still not understanding that with Covid-19 being as contagious as it is (at least that's what we all continue to be told) that the vaccinations need to be more “area targeted” to truly be effective; or that many folks already have acquired naturally occurring antibodies against Covid-19; one Dr. Paul E. Marik, founding member of the FLCCC and Chief, Pulmonary and Critical Care Medicine at Eastern Virginia Medical School recently stated that, "We are calling on regional public health authorities and medical professionals around the world to demand that ivermectin be included in their standard of care right away so we can end this pandemic once and for all."

And I, for one, believe Dr. Marik's words of hope and assurance that this pandemic can and will end in time with proper treatments given way more than I will ever believe the questionable words of Dr. Anthony Fauci, a doctor turned Democrat political hack who honestly has no idea what he is doing nor the damage his words, actions, and now inactions are causing to our nation. In fact, I believe that if Dr. Fauci does not immediately institute ivermectin as part of our COVID-19 treatment protocol that he will personally be responsible for the deaths of many more Americans...Americans whose blood will be solely on his deceitful and ever so manipulative hands. Case closed.

Tomorrow, Tuesday, May 18th, from 7 to 9pm EST, RIGHT SIDE PATRIOTS Craig Andresen and Diane Sori discuss 'Politics, Big Business, and a Possible "Miracle Drug'; 'The CIA is W-O-K-E'; and important news of the day.

Posted by Diane Sori at 6:11 AM No comments: