WASHINGTON - Barack Obama participated in a panel discussion this week about poverty in America, but failed to acknowledge the central reason why it has remained so high under his presidency.

And that reason has to do with anti-growth policies that have held back tens of millions of low income Americans, and destroyed entry level jobs that would help the poor get on the first rung of the economic ladder.

The Census Bureau, which gathers the nation's poverty data, said that more than 45 million Americans were stuck below the poverty line, according to figures released late last year.

This means that nearly 15 percent of all Americans live in poverty.

Obama never misses an opportunity to brag about how much better life in America is under his presidency, often cherry picking numbers that leave out other statistics that show how bad things really are in Obama's economy.

He can't do that with the poverty numbers we've seen under his administration. With a little more than a year and a half remaining in his presidency, poverty rates are much higher than the 12.3 percent level under his predecessor in 2006, before the Great Recession began.

You might think Obama would have reached one or two conclusions about why poverty remains so high under his presidency.

But he hasn't a clue, as he fully demonstrated during a panel discussion on poverty at Georgetown University on Tuesday.

Consider his odd observation that racial segregation in America has since been replaced by "class segregation," a societal change that, he said, needs to be addressed.

That sounds very much like the class warfare themes Obama has demagogued throughout his two campaigns for president. But how can we lift the poor out of poverty? He didn't say.

Here's a sampling of Obama's muddled thinking about all this:

At a recent White House science fair celebrating inventors, a Girl Scout who helped design a Lego-powered page-turning device asked President Obama what he had ever thought up or prototyped. Stumbling for an answer, he replied:

"I came up with things like, you know, health care."

Ah, yes. "Health care." Remember when the president's signature Obamacare health insurance exchanges were going to be the greatest thing since sliced bread, the remote control, jogger strollers, Siri, the Keurig coffee maker, driverless cars and Legos all rolled into one?

You will be shocked beyond belief, I'm sure, to learn that Obamacare exchanges across the country are instead bleeding money, seeking more taxpayer bailouts and turning everything they touch to chicken poop.

Wait, that's not fair to chicken poop, which can at least be composted.

A message from Pamela Geller: You know what happened in Garland, Texas. Two jihadists wanted to replicate and ramp up what happened in Paris, by murdering scores of patriotic Americans who were standing in defense of free speech. They were met with an utterly authentic response. The media has been waging jihad against the defenders […]

The chairman of the House committee investigating the 2012 attacks in Benghazi, Libya, said Thursday that he can't set a date for Democratic presidential candidate Hillary Clinton to testify before his panel because the State Department has been slow in producing needed documents.
In a letter Thursday to Secretary of State John Kerry, Rep. Trey Gowdy, R-S.C., complained that the department has delayed providing emails and other documents involving Clinton, a former secretary of state.


"Simply put, the committee must have the records of communication requested more than six months ago before the secretary's appearance can be scheduled," Gowdy wrote.

The State Department pushed back, saying the department has provided 300 emails from Clinton, 19 witnesses and more than 4,000 pages of documents from the initial State Department investigation.
The Benghazi committee "doesn't know how to take 'yes' for an answer," said State Department spokesman Alec Gerlach.

Gowdy had initially called for Clinton to testify next week on the attacks that killed four Americans, including the U.S. ambassador to Libya, but he told Kerry that no longer appears possible.

Democrats have complained that Gowdy and other Republicans are drawing out the Benghazi hearings in order to disrupt Clinton's presidential campaign, but Gowdy said the State Department is to blame for any delays. The committee must have a complete record before lawmakers can effectively question Clinton, Gowdy said.

"The only thing standing between the committee and the former secretary being able to discuss her tenure as secretary of state as it relates to Libya and Benghazi is the Department of State's failure, in more than half a year, to produce a single, solitary email responsive to our request and subpoena," Gowdy wrote.

Gerlach called that claim inaccurate. In addition to the 300 Clinton emails, the committee has had at its disposal at least 40,000 pages of documents since August, he said.

To underline the seriousness of his complaint, Gowdy told Kerry that the committee has "shared it concerns" with lawmakers responsible for the agency's budget "in the event reprogramming" of some department spending is needed to ensure compliance with the committee's request.

Rep. Elijah Cummings of Maryland, senior Democrat on the Benghazi panel, said Republicans were on "a fishing expedition for anything they can use against Secretary Clinton in her presidential campaign," adding that "every time they come back empty-handed, they extend their trip at taxpayer expense."

Cummings said the Benghazi committee has had Clinton's emails for months.

"This new claim that the department has not produced a single responsive document is completely baseless and appears to be yet another excuse to drag out Secretary Clinton's testimony until closer to the (2016) election," Cummings said. 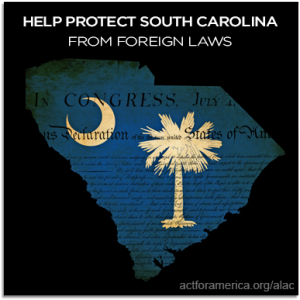 Republican-sponsored anti-sharia legislation which would ensure that Islamic and other foreign laws are kept out of consideration by South Carolina courts is being stonewalled by Democrat panderers who seek to appease Muslim supremacists pushing hard to get sharia law recognized by American courts.

Post and Courier  A vote on the anti-Sharia law bill was postponed until Tuesday at the earliest after an hours-long debate over Charleston Republican Rep. Chip Limehouse’s proposal. Limehouse has said a law is needed to prevent radical Islamic beliefs from infiltrating state courts.

Democrats said the bill showed why the GOP was unfit to govern and why South Carolina is the butt of late-night television jokes. They accused Republicans of legislating off of Internet rumors.

Rep. James Smith, D-Columbia, called the bill “red meat” and “politics at its worst,” while Rep. Gilda Cobb-Hunter, D-Orangeburg, chastised Limehouse and others for having the wrong priorities.

Elibiary is a former Obama Homeland Security Senior Advisor
Read more »
Posted by Diane Sori at 9:37 AM No comments: