We all know that Barack Hussein Obama lies and wouldn't know the truth if it came up and hit him upside the head.  Here are just three of his countless lies to 'We the People.'

Lie number one.
Last Tuesday Barack Hussein Obama tried fooling ‘We the People’ into believing that he’s a small-government leader and that Ronald Reagan was not.

Absolutely NOT true as more government jobs have been created by Obama’s so-called stimulus than any other kind of jobs.  Where are all the private sector jobs he promised under his Stimulus Package...they are nowhere to be seen.  The stimulus did NOT have a statistically significant effect on employment as all the stimulus did was create and/or save an estimated 450,000 government jobs while destroying or preventing an estimated 1 million private sector jobs.

So, Mr. Obama, a small government leader you are not.

Lie number two.
Obama claims the world is a safer place now that al- Qaida has been rendered basically impotent.

Again, NOT true because if we look at the world pre-9/11 and at the world today, we see that al-Qaida continues to operate worldwide.   Al-Qaida continue to train fighters in Afghanistan including the Taliban, they continue to operate in Pakistan, Yemen, Egypt, the east coast of Africa, Somalia, Kenya, and across the northern rim of Africa.  Al-Qaida has reorganized in Iraq, was part of the overthrow of Gaddafi in Libya, and fights against Assad in Syria with Iranian backing and encouragement.  And while they love to kill Christians they still love to kill Jews for let’s not forget al-Qaida encourages and supports the Palestinian uprisings.
So, Mr. Obama, the world is NOT safer today than pre-9/11.

Lie number three.
Obama claims that the only way to renew economic strength at home is to cut defense spending.

I hate to tell you, Mr. Obama, but the one area you NEVER cut is spending in defense of OUR country and OUR citizens.

Obama is trying to cut billions of dollars more to the defense budget in addition to what has already been cut; additional cuts that would ravage our national security and jeopardize our ability to maintain the peace and preserve our interests both at home and overseas.   He forgets that we are still at war with islam (yes Mr. Obama, we ARE at war with islam) and will be for quite some time, and that we are at war on our own southern borders whether he cares to admit it or not.  And monies, large amount of monies, are needed to win those wars in defense of OUR country and OUR citizens.

So, Mr. Obama, cut your freebie programs and leave the monies needed to defend OUR country and OUR citizens alone.

The bottom line with these three Obama lies is that he denies assertions that he is presiding over America's decline and ultimate destruction.   Creating more government jobs, refusing to acknowledge the dangers we still face from terrorist organizations, and cutting the defense budget tells another story.  Barack Hussein Obama is presiding over and leading the rush to America’s destruction while lying to ‘We the People’ every step of the way.

'Bizarre': 'It's remarkable and goes contrary to decisions' in other states 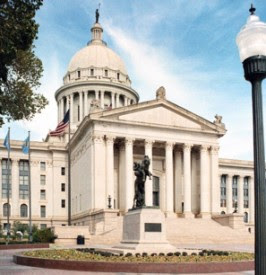 A “bizarre” and unexplained state court decision that was contrary to normal procedures may have given pro-life supporters the perfect storm that could prompt the United States Supreme Court to re-visit the case that legalized abortion in the first place.

Citizens of Oklahoma were in the process of gathering signatures to place a personhood amendment on the ballot for this November’s elections, when the proposal was challenged by abortion advocates.

In Oklahoma and many states with initiative processes, groups and individuals opposed to a proposed initiative are allowed to challenge the proposal. The ACLU and Center for Reproductive Rights challenged Oklahoma’s plan, arguing that the declarative statement in the amendment violated federal constitutional law.

In what Personhood USA called “a rare move against the people of Oklahoma,” the state Supreme Court sided with pro-abortion groups and ruled on the constitutionality of the amendment before it was passed by the voters.

“Typically in legal cases, courts refuse to issue a ruling until a law is actually passed. The reason has to do with standing, before the proposal becomes a law, no one is been affected by it,” he said.

The Obama administration has even acknowledged this principle. Justice Department lawyers asked a judge in Pittsburgh to dismiss a lawsuit filed by Geneva College challenging Obamacare regulations requiring employers to offer birth control coverage that includes so-called morning after drugs that abort fertilized embryos on the grounds the regulations have not taken effect yet.

“It is highly unusual for a state court to decide immediately on the federal constitutionality of a state initiative before the people have had a chance to vote on it,” he said.

“It would be akin to a person interrupting debate on a proposal in the legislature and telling them they could not go forward in the legislative process because it was unconstitutional.”

He said, “If the Supreme Court can stop the legislative process from taking effect then who exactly is the one passing the laws?”

He says he believes the state Supreme Court was attempting to avoid tackling the actual issue of abortion itself.

“I believe they were looking to pull a ‘Pontius Pilate’ and simply wash their hands of the issue,” he said.

“They issued their decision before the ink was even dry on our briefs and the decision was a simple page and a half decision.

“It’s quite a remarkable move and goes contrary to decisions by other high courts that have been faced with similar issues. In Mississippi the same pro-abortion groups opposed ‘Personhood’ last year, but in that case their high court said ‘who are we to rule on this half-baked process. It is too premature and inappropriate; we don’t have that kind of power.’”

He said. “The same thing happened in Ohio where their Supreme Court said the issue needed to be passed by voters before they would consider the issue.”

Even in California, where an openly “gay” judge declared a constitutional amendment defining marriage as being between a man and a woman unconstitutional, the court waited until the amendment actually passed prior to hearing the case.

In another unusual twist, the court’s decision is surprisingly short and provides no reasoning as to the basis of the decision.

“The measure is clearly unconstitutional pursuant to Planned Parenthood V Casey,” the high court decision says. “Twenty years ago, this court was presented with an initiative which facially conflicted with the Casey decision. This court held: ‘the issue of the constitutionality of the initiative petition is governed by the United States Supreme Court’s pronouncement in Casey.’”

Typically when a court issues a decision judges provide specific reasoning, explaining how they arrived at their conclusion. However, in this case, the court provided no explanation as to how the personhood amendment violated the 1992 Casey decision.

Casey involved a challenge of several provisions in the Pennsylvania Control Act that would among other things require doctors to provide women with information about the health risks and possible complications from an abortion, a 24-hour waiting period prior to an abortion and a parental consent requirement.

In a 5-4 ruling the U.S. Supreme Court established a new standard for determining abortion issues, such as whether the legislation posed an “undue burden” on the mother.

In addition to establishing the new standard, the court upheld the state’s 24-hour waiting period, and informed and parental consent requirements, stating that these restrictions did not create an undue burden.

Crampton said amendment supporters are planning to appeal the Oklahoma decision to the United States Supreme Court, noting that there is nothing in any personhood amendment that would violate Casey.

Liberty Counsel is attempting to get as many organizations as possible to submit amicus briefs in the next 90 days in an attempt to persuade the court to re-visit Casey and possibly Roe v. Wade, the 1972 case that legalized abortion.

Crampton points out that the personhood amendment is not even a law and does not in and of itself make any type of abortion illegal, but simply defines the term person.

“This amendment does not outlaw abortion or criminalize any conduct,” he said. “If as a result of this amendment, lawmakers were to subsequently pass legislation outlawing abortion, you would still have a long way to go before abortion would finally be illegal.”

He said, “Casey never said anything about personhood. All it did was set forth a standard for prohibitions in abortion. It doesn’t say anything about declarations such as what is happening with personhood legislation.

“By claiming Casey as the justification for its decision, they have unwittingly given us the perfect opportunity to formally petition the court for a re-consideration of Casey and Roe,” he said.
Posted by Diane Sori at 8:51 AM No comments: