American Muslims are attacking Netanyahu on the eve of his speech. We fight back.

They are at it again. But so are we.

The Islamic supremacist group American Muslims for Palestine, or AMP, is yet again libeling Israel and calling for it to be thrown to the jihadi wolves. And my organization, the human rights advocacy group American Freedom Defense Initiative, or AFDI, is once again countering them every step of the way.

The AMP ad pictures Israeli Prime Minister Benjamin Netanyahu holding a sign, and it quotes Netanyahu, “America is a thing you can move very easily,” and adds: “Stop the disrespect – End US Aid to Israel.”

AMP, the sponsor of this Jew-hating ad, evokes the ugly anti-Semitic stereotypes in which Jew-haters have long trafficked. This is part of a systematic campaign by many different Islamic and leftist groups to dehumanize and demonize the Jewish state. This vicious propaganda is running unchallenged even by pro-Israel groups that ought to be at the forefront of this battle.

To counter the AMP ads, we’re reviving our renowned ads reading, “In any war between the civilized man and the savage, support the civilized man,” with the new tagline, “Increase aid to Israel. Stop funding jihad.”

Why Does President So Oppose Netanyahu’s Speech?

What is going on? The National Security Advisor is just that – an advisor. It is not a cabinet post, nor a position of authority. It is not an appointment that requires confirmation of Congress. The president picks this individual to serve as a staff advisor on national security affairs.

So who is Susan Rice to be hitting the media and defining the nature of relations between the United States and it’s principle friend and ally in the Middle East – the only free nation in that part of the world?

In a new poll from Gallup, 70 percent of Americans express a favorable opinion of Israel, unchanged from where it stood same time last year. Gallup concludes that “the evident friction between President Obama and Israeli Prime Minister Benjamin Netanyahu” has not “affected how each is perceived in the US.”

So why is Susan Rice, an unelected, unconfirmed, White House bureaucrat appearing in the media, defining the nature of relations between these two important free world allies? And doing so inaccurately?

“Of course, Israel cannot be expected to negotiate with anyone who is dedicated to its destruction. But while I know you have had differences with the Palestinian Authority, I believe that you do have a true partner in President Abbas…”

When I wrote my book, The Post American Presidency, The Obama Administration’s War on America, I warned that Obama’s antisemitism would have grave consequences.


The Bethlehem-based news agency Ma’an has cited a Kuwaiti newspaper report Saturday, that US President Barack Obama thwarted an Israeli military attack against Iran’s nuclear facilities in 2014 by threatening to shoot down Israeli jets before they could reach their targets in Iran.

He doesn’t even pretend anymore. And the terrible reality is that there are so many on the left who love this — The Democrats have become the anti-Israel party with the anti-semite-in-chief.

It’s worse than we know.

Email ThisBlogThis!Share to TwitterShare to FacebookShare to Pinterest
Op-ed:
Words Every American Must Heed
By: Diane Sori / The Patriot Factor / RIGHT SIDE PATRIOTS on CPR Worldwide Media 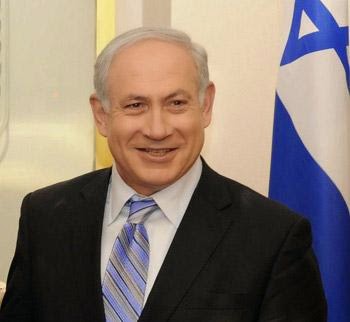 “The Senate warmly welcomes the Prime Minister of Israel, Benjamin Netanyahu, on his visit to the United States...which provides a timely opportunity to reinforce the United States-Israel relationship.”

Tomorrow, as Secretary of State John 'Swiftboat' Kerry meets with his counterparts in Switzerland to lock-in a deal for a 'so-called' framework accord with Iran, Benjamin Netanyahu will stand tall and proud at the lectern of the U.S. Congress to warn both Congress and 'We the People' that Barack HUSSEIN Obama is ready to basically sign what amounts to what he calls “a deal with the devil.”

Rightly fearing that Obama's traitorous...YES traitorous...Iran policies...decidedly anti-Israel/pro-Israel's enemies policies that has been on-going for six years now...has Obama playing diplomatic games NOT only with Israel's survival but with America's survival as well. Ignoring the fact that Israel is geographically but a hop, skip, and a jump away from Iran...as in Israel being easily within firing range of Iran...Obama turns a blind-eye to Iran's 'anything but peaceful' nuclear ambitions...ambitions NOT solely aimed at the Jewish state but ambitions aimed directly at America...the 'Great Satan'...as well. 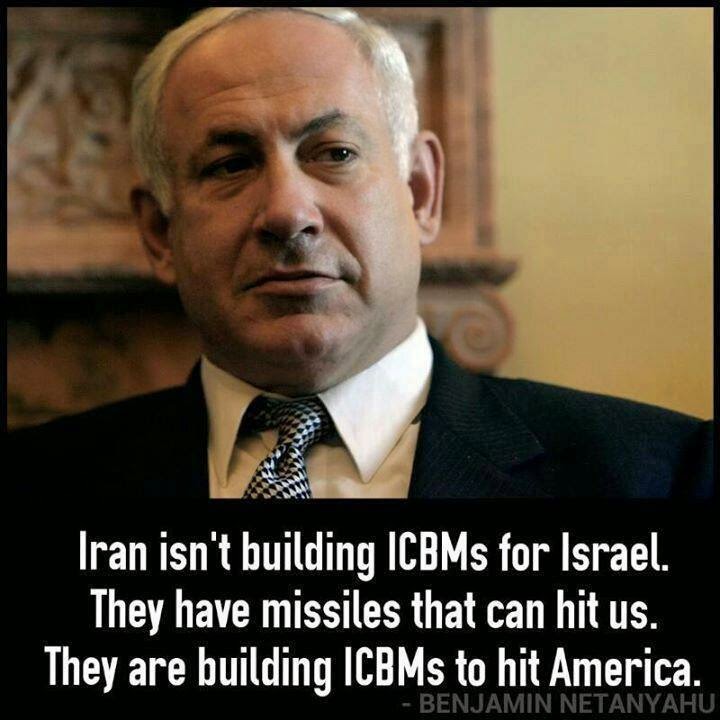 So in reality the bottom line is that Netanyahu's addressing this joint session of Congress has all the hallmarks of becoming a final showdown between (I believe) a traitorous, back-stabbing, anti-Semitic, Israel-hating, American president vs. the world's last great statesman...a man who rightly claims the future of both the State of Israel and the world has been placed in danger by Obama's pending “bad deal” with Iran...a highly controversial deal that has Obama acquiescing...bowing down... to Iran’s demands to be allowed to continue to enrich uranium while Netanyahu rightfully considers it unacceptable that any deal with Iran that does NOT end its nuclear program in its entirety is ever agreed to.

And to those who question why House Speaker John Boehner...who finally did something right...bypassed the Obama White House with the Netanyahu invitation...jog your memories back a bit to Obama's recent State of the Union Address where he clearly lied that “sanctions and diplomacy are working”...they're NOT as Iran continues to snub its nose at the sanctions as they press forward with their uranium enrichment program...and where he threatened...YES threatened...to veto any and all new sanctions that Congress might pass against Iran. Also, remember how America's relations in general with our closest friend and ally, Israel, have deteriorated almost to a point of NO return thanks to Obama and his outward support of the 'so-called' Palestinians, including his NOT condemning their almost daily rocket attacks on Israel...and you will understand why Boehner had NO choice but to do what he did in the manner that he did.

So of course playing tit-for-tat for the invitation, the White House announced that Obama...the man who routinely welcomes the Muslim Brotherhood into the White House and into our halls of government...will NOT meet at all with Netanyahu during his time in the states. And Vice President Joe Biden...who hastily arranged to be out of the country on Tuesday...along with 12 anti-Israel, pro-Palestinian Congressional members who have vowed to work to counter BiBi's warnings about the dangers of a nuclear Iran and who claim that Netanyahu's speech is an example of a foreign leader interfering with White House efforts at diplomacy...diplomacy that actually minimizes the existential threat to Israel...will also NOT be in attendance during the Prime Minister's address.

And how and why did America's relationship...or should I say this administration's relationship as 'We the People' have always stood strongly united behind both Netanyahu and Israel...deteriorate to this point...a simple and direct answer is that we have an occupant residing at 1600 Pennsylvania Avenue who is a muslim and who might (in my opinion) also be an islamic terrorist of sorts...albeit one who terrorizes with 'his pen and his phone' without having to brandish a knife or a match.

But tangible examples abound with the first being, remember how within months of taking office Obama condemned Israel in his now come back to haunt Cairo, Egypt, address to the Arab world...an address where he challenged the legitimacy of Jewish settlements on 'so-called' Palestinian-claimed land and where he cited the Holocaust as the sole justification for Israel's existence while completely ignoring any historical or Biblical Jewish ties to the Holy Land.

Second, remember how furious Obama was when Netanyahu's government refused to heed his demand that NO new housing units be built in East Jerusalem while VP Joe Biden was visiting Israel in 2010, and how Obama claimed that Israel's house building plans were counter to both his and the U.S. efforts to restart the 'anything but peace talks' between the Israelis and Palestinians...like Barack HUSSEIN Obama has any right to tell a sovereign nation what they can or cannot do on their own land.

Third...and I love this one...remember Netanyahu's turning Obama's face red when during a 2011 televised meeting at the Oval Office BiBi called Obama to task and...in front of the nation's top journalists I might add...lectured him at length about Israel's history and publicly dismissed Obama's conditions for restarting peace talks. 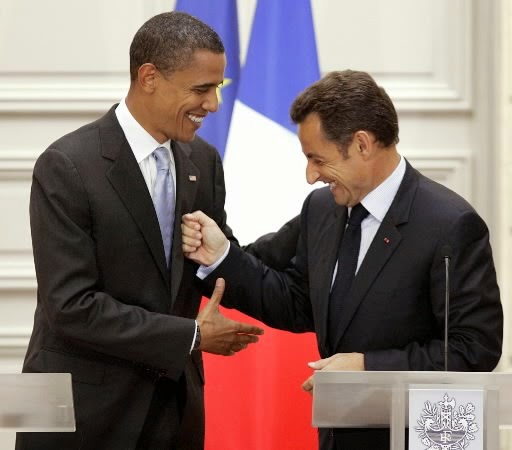 And fourth...Obama's personal hatred...YES hatred...for both Netanyahu and Israel became clear for all the world to hear when during the G-20 Summit in Caines, France, in November 2011, a microphone picked-up what was thought to be a private conversation between Obama and then French President Nikolas Sarkozy...who had just said that he can’t stand Netanyahu...and while he, Sarkozy, may have be fed up with Netanyahu, Obama had the unmitigated gall to say, "You are sick of him, but I have to work with him every day." And when U.S. Congressman Michael Grimm (R) strongly urged Obama to personally apologize and issue a formal apology on behalf of the American people for his “disgraceful” remarks saying that, “whether the microphones are on or off, the message to our allies in Israel should always remain the same...We stand with you,” Obama refused. Netanyahu is still waiting for that apology...an apology we all know will NEVER come.

And while many other stabbing Israel in the back events have occurred over the ensuing years...including Obama's most grievous demand that Israel return to its now indefensible pre-67 borders...thankfully as the saying goes “payback is indeed a bitch” as NO matter how hard Obama and the White House tried to block Senator John Cornyn's (R-TX) 'Welcome Netanyahu Resolution,' the fact remains that while NO Democrat Senators co-sponsored the resolution (50 Republican Senators did)...a resolution which concluded with the words that the U.S. will reaffirm its “commitment to stand with Israel during times of uncertainty” and vow to “strongly support Israel’s right to defend itself from threats to its very survival”...NONE...NOT a one...caved to Obama's much put upon pressure to vote against it. 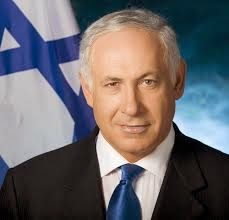 And now we are at a crossroads of sorts with Obama NOT even trying to hide the facts that he and his administration are actively working to sabotage Netanyahu's address...out of fear that it may hurt his relationship with his blood brethren of course...as well as the fact that his bought-and- paid-for cronies are working behind the scenes... with our taxpayer dollars I might add...to help defeat Netanyahu in Israel’s upcoming mid-March election. And that too is backfiring on him as Netanyahu, according to all the recent Israeli polls, will indeed be elected to a historic fourth term as Israel's Prime Minister.

So my friends the bottom line is this...tomorrow we will hear the truth about Iran and its nuclear ambitions...we will hear the truth that this administration and the in-the-pocket-of-Obama media want to be kept hidden at all costs. So I urge every American to watch and carefully listen to Benjamin Netanyahu's words and to take those words to heart, because NOT only will Israel's survival depend on us heeding those words but America's survival will as well.