Obama, Why Don’t You Just Resign?

By Michael J Nellett / The Western Center for Journalism
inShare16

Barack Hussein Obama has decided that in order to punish Arizona for having dared enforce American immigration laws, he has ordered his federal agencies to basically stop working with Arizona’s law enforcement agencies concerning illegal immigrants. Attorney General Eric Holder Jr has also made it known as the nations chief law enforcement officer that he too is only going to selectively enforce immigration laws that he personally likes. More to the point, Holder will only enforce what is beneficial to his boss’s re-election campaign. If I’m not mistaken, this attitude by both men is blatantly UNCONSTITUTIONAL and falls under the heading of “high crimes and misdemeanors’, an IMPEACHABLE offense!

Mr. Obama, how in the world can you look at the people of Arizona and tell them that YOU are not willing to give them EQUAL PROTECTION under the laws of the United States? Brian Terry, an American Border Patrol Agent, was shot in the back 18 miles INSIDE the border of the United States! Jaime Zapata, an ICE agent, was also killed because of an illegally run and botched program known as Fast & Furious.

Being an accomplice to murder, Mr. Obama, is a crime punishable by prison time. Maybe you and Mr Holder could share a cell? Anyway, I digress…..again!

My feelings are, Mr. Obama, that you should be impeached before any more American and Mexican bodies pile up because of your insanity. Mr. Holder should be found guilty of contempt of Congress and charged with negligent homicide in the cases of the two dead federal agents. You and Holder should also have to face justice in the death of the Arizona rancher and others who were killed by your illegal compadres coming across our borders and onto American’s rightfully-owned land. I have an idea for a reverse gun walking program that I would like to run called “Slow & Deliberate”! It’s a program whereby I legally get to use federal funds to LEGALLY buy guns from LEGAL gun shop owners and arm American citizens to help guard the American border from the intrusion of illegals from everywhere. No problems, no paperwork, no questions! All neat, tidy, and LEGAL!

I realize that my program would severly curtail a large number of illegal votes, but those citizens along our Southern borders would sleep better! Mr. Obama: you and Holder took an oath to “Preserve, Protect, and Defend the Consdtitution of the United States”, not your Communist manifesto or Saul Alinsky’s Bible of social justice. If it is beyond your will to do so, then please step aside and let someone who loves this country and ALL of its laws sit in the seat that rightfully belongs to them.

Your willingness to sell out the majority of Americans to curry favor with radical minority groups is not only shameful, but dangerous to our country. Our Constitution was designed to protect this country from despots like yourself, and it is time that our so called “representatives in Washington D.C.” realized that and grew a spine to deal with you. Not one more American should have to suffer intimidation, injury, or death because you are more interested in getting re-elected than enforcing our laws and doing what’s right for the American people.

I sincerely hope and pray that the American people wake up to what you and SOCIALIST PROGRESSIVISM has done and is doing to our country. You don’t deserve to be where you are, let alone get re-elcted to continue your destruction. Retire quietly, Mr. Obama, for the sake of us all.

P.S.: take Janet Napolitano with you.
Posted by Diane Sori at 5:17 PM No comments:

British researchers come up with new theory for cryptic structure 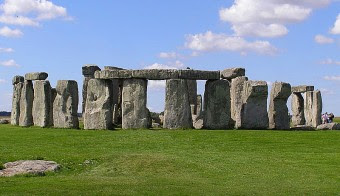 Has the mystery of Stonehenge finally been solved?

Researchers in Britain who have been studying the famously cryptic structure for the past 10 years believe they could have the answer, and it has little, if anything, to do with sun worship by ancient Druids or even construction by space aliens.

The latest theory is that the monument was designed to mark the unification of feuding farming communities who decided to make peace some 4,000 to 4,500 years ago.

The Stonehenge Riverside Project, or SRP, has featured teams from the universities of Sheffield, Manchester, Southampton, Bournemouth and University College London investigating the origins of the puzzle in Salisbury, England.

He explains the characteristics of the stones are very appropriate to its time and place.

“All the architectural influences for Stonehenge can be found in previous monuments and buildings within Britain, with origins in Wales and Scotland. In fact, Britain’s Neolithic people were isolated from the rest of Europe for centuries. Britain may have become unified but there was no interest in interacting with people across the [English] Channel. Stonehenge appears to have been the last gasp of this Stone Age culture, which was isolated from Europe and from the new technologies of metal tools and the wheel,” he said.

Researchers say such a huge project would have required vast resources and thousands of workers, with the resources likely serving as a unifying force among residents of the region.

“Stonehenge itself was a massive undertaking, requiring the labor of thousands to move stones from as far away as west Wales, shaping them and erecting them. Just the work itself, requiring everything literally to pull together, would have been an act of unification,” Parker Pearson said.

Over the years, there have been many theories as to why Stonehenge was constructed.

Time Magazine published a 2009 article by Dan Fletcher to document some of the ideas.

Fletcher said fascination with the origin of the site began back in A.D. 1130 when an English historian said “no one can conceive how such great stones have been so raised aloft, or why they were built here.”

One outlandish theory is that space aliens were the designers.

“These theories feed off the fact that no one’s exactly sure how the rocks got to their present location –the origin of some were traced as far as a Welsh mountain range 137 miles away from the Stonehenge,” Fletcher said. “Although modern tests employing only technology from the era have moved similar stones, there’s still no full explanation for how ancient people managed such a feat. Hence, aliens.”

Other theories include the possibility Stonehenge was an ancient astronomical calendar, a navigational landmark, a burial place, or a location for healing. Another guess was the configuration was a tribute to an ancient fertility goddess, claiming the structure resembles a giant vulva.

While sun worship may not have been the prime reason for its development, Parker Pearson says the location of the site may have a solar connection, as it lines up with the sunrises of annual solstices, and that its main avenue also align with features in the nearby landscape.

“When we stumbled across this extraordinary natural arrangement of the sun’s path being marked in the land, we realized that prehistoric people selected this place to build Stonehenge because of its pre-ordained significance,” he said.

“This might explain why there are eight monuments in the Stonehenge area with solstitial alignments, a number unmatched anywhere else. Perhaps they saw this place as the center of the world.”

Posted by Diane Sori at 5:12 PM No comments:

Email ThisBlogThis!Share to TwitterShare to FacebookShare to Pinterest
Op-ed:
Straddling the fence...the Supreme Court cops out
By: Diane Sori 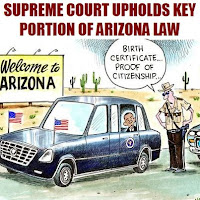 With yesterday’s Supreme Court ruling there went our states having the right to enforce the sovereignty and security of their own borders.  And after the dust settled and we had time to digest the ramifications of the Court’s ruling, it’s now obvious that the Supreme Court Justices partook of the kool-ade, if not guzzling it down whole they did at least sip from the cup.
In a majority ruling the Supreme Court Justices (Elena Kagan recused herself from the case because of her work as Obama's first solicitor general) did just what I expected...they straddled the fence on Arizona Immigration Law SB1070.  The Justices ruled against three provisions they felt overrode existing federal law, but surprisingly unanimously upheld an important key provision that Arizona Governor Jan Brewer called “the heart of the bill” that allowed police to check a person's immigration status while enforcing other laws if ‘reasonable suspicion’ existed that the person was in the country illegally.
While this ruling does allow police limited authority, it also states that the police must check with federal immigration agents before actually holding suspects, and in addition restricts a state’s ability to detain someone over their status if such detentions are deemed too long.
It’s like a game of tug of war where both sides collapse and no one wins.
And by ruling that the federal government does indeed have the final authority in deciding who can be held and who can be deported, the Justices upheld the federal government’s right, and their right alone, to set the country’s immigration policy and laws.  This directly affects Obama’s politically driven change to our long-standing immigration policy, and gives credence to his now allowing young ILLEGALS who were brought to this country as children to be able to apply for temporary work visas, which gives them a 2-year temporary stay in deportation.
Can full blown amnesty be far behind....that for sure is coming next.
Two of the three provisions the Justices did strike down would have made it a crime for undocumented immigrants ‘to be present and to carry documents seeking employment’ in Arizona.  The third would have given police the authority to make warrantless arrests of anyone they had probable cause to believe had committed a deportable offense.
It’s one out of four...NOT exactly what we wanted but at least NOT a total victory for Obama either for as soon as the ruling came down, Obama’s team was already at work trying to overturn the one provision, the so-called ‘heart of the bill’ that did stand.
So, the bottom line is this folks...these nine individuals have said to all of us millions of LEGAL Americans that even though the majority of ’We the People’ do NOT want Obama’s change to our immigration policy, and we DO want Arizona to be able to secure their own borders, that all we want means absolutely nothing as the rights of ILLEGALS have now trumped the rights of us LEGAL American citizens.
As I've said before, November 6th can’t come soon enough.
Posted by Diane Sori at 9:46 AM 10 comments: