One of the biggest lessons we learned during the 2016 presidential election was that the mainstream media is not just biased; it is not even a news source at all. It is just a propaganda arm for the hard Left and the Democratic Party, including its agenda of denial, willful ignorance, and false Muslim victimhood […]

This is what Nancy Pelosi meant when she called the tea party movement (a historic phenomenon unmatched in American history) “astroturfing.” Projection — it’s what the left does. Nancy Pelosi said tea party protests are “not by any means an organic grassroots movement. Rather, she said, they are a deliberate astroturf campaign organized by two well-funded right-wing think tanks.”

Because that’s what they do.

The left always accuses us of what they are guilty of. Here’s what they don’t understand — we know the enemy. We have been fighting this evil for eight years. We are battle-hardened. They don’t have a chance.

Tyler Durden, Zero Hedge, November 12, 2016:
Earlier today we showed that, contrary to USA Today’s claims that the anti-Trump protests across the nation are “spontaneous, involving people from all walks of life”, according to Wikileaks documents at least two of the people profiled by USA Today have a history of being professional agitators for the Democratic party, whose task is to stir up popular protests and – in extreme cases – unleash rioting, such as the following clip showing the latest day of violent protests in Portland revealed.

Read the entire article and see the video here: http://pamelageller.com/2016/11/blocks-anti-trump-protest-buses-caught-tape-soros.html/

Chinese Vice Finance Minister Shi Yaobin told Reuters that U.S. President-elect Donald Trump should “be aware of the economic cooperation with China” after Trump made “taking on” the world’s Number 2 economy an integral part of his campaign. 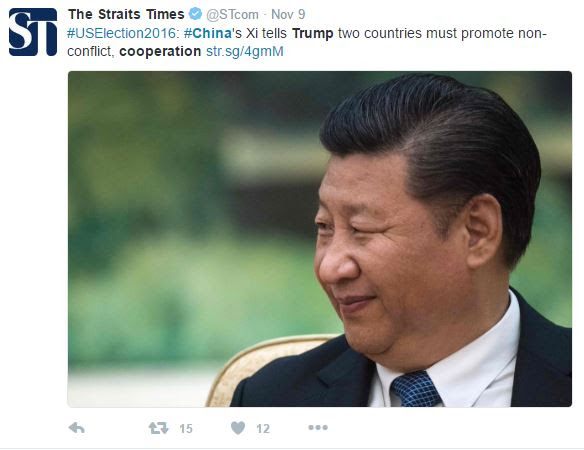 
“I want to emphasize that long-standing economic cooperation between China and the U.S, particularly in the economic areas, this cooperation has yielded win-win benefits for the Chinese people and American people,”

Yaobin is referring to Trump’s plan to tax Chinese imports in a effort to prevent inflation and currency devaluation. Yaobin went on to claim that his message is being directed not only at Trump but the American people as well.


“I think these facts should be recognized by the president-elect and also by the people of the two countries.”

Yaobin continued to state that he hopes both countries can pursue non-conflict and cooperation throughout Trump’s presidency. The press conference that was held in London.
Posted by Diane Sori at 12:42 AM No comments:

President-elect Donald Trump is vowing to begin immediately deporting criminal illegal aliens as one of his first acts of office.

“What we are going to do is get the people that are criminal and have criminal records, gang members, drug dealers, where a lot of these people, probably two million, it could be even three million, we are getting them out of our country or we are going to incarcerate,” Trump told CBS' "60 Minutes" in an interview to air Sunday evening.
“But we’re getting them out of our country if they’re here illegally," Trump said.

He said he will begin making a "determination" about what to do with the remaining undocumented immigrants in the U.S. after the border is "secure."

Trump has seemed to back down on his promise to create a "deportation force." On Sunday, House Speaker Paul Ryan also played down that plan.
Posted by Diane Sori at 12:26 AM No comments:

Watching the recent anti-Trump post-victory riots on television and the temper tantrums on social media, it’s become obvious that, without Divine intervention, the ever-fearful Millennial generation will become known as America’s Lost Generation.

As someone who has been forced to face a few of her biggest fears against her will, I can say with some authority that while everything you fear will probably never come to pass, those things which do can make you better. Safe spaces are the last thing these crybabies need.

During his first inaugural address in 1933, President Franklin D. Roosevelt spoke to fear before a justifiably fear-ridden nation during the Great Depression telling them, “The only thing we have to fear is fear itself.”

Depression-era Americans were dealing with real fears like massive unemployment, homelessness and starvation. Families lucky enough to have jobs lost 40 percent of their income. Many people lost all their savings when banks collapsed leaving millions homeless and hungry, resulting in a 50 percent rise in parents turning their kid’s over to custodial institutions to prevent starvation.

In February of 2016, The New York Times reported that everyone in Clinton land thought they were going to slaughter Donald Trump. It was hubris. It was typical elitism from the liberal elite. And in the end, the Trump campaign smashed the face of the Clinton operation with a brick, doused it in gasoline, and set it on fire. It was an upset that no one, except for white working class America and die-hard Trump supporters, saw coming, which explains the epic temper tantrums emanating from the Left. Old, sick Hillary lost and Donald Trump is now president-elect.

But there was one person who potentially saw this coming: Bill Clinton. Bill, a governor from Arkansas who was able to tap into the economic distress of America’s working class and ride that to the presidency, saw that Trump was onto something. At the same time, his strategy to tackle this vulnerability failed miserably (via NYT 2/29/16):


Several Democrats argued that Mrs. Clinton, should she be her party’s nominee, would easily beat Mr. Trump. They were confident that his incendiary remarks about immigrants, women and Muslims would make him unacceptable to many Americans. They had faith that the growing electoral power of black, Hispanic and female voters would deliver a Clinton landslide if he were the Republican nominee.