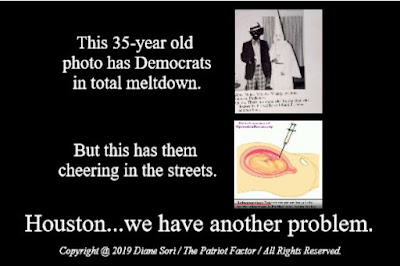 Email ThisBlogThis!Share to TwitterShare to FacebookShare to Pinterest
Labels: blackface, Democrats, late-term abortion
Here's How Many More Active-Duty Troops Are Being Sent to the US-Mexico Border
Julio Rosas / Townhall Tipsheet

In a statement released Sunday, the Pentagon revealed the number of active-duty service members that will be deploying to the U.S.-Mexico border in response to more migrant caravans making their way north.

“The Department of Defense will deploy approximately 3,750 additional U.S. forces to provide the additional support to CBP at the southwest border that Acting Secretary of Defense Shanahan approved Jan. 11,” the statement reads. “That support includes a mobile surveillance capability through the end of September 2019, as well as the emplacement of approximately 150 miles of concertina wire between ports of entry.”

The surge in troops will bring the total amount of active-duty members to around 4,350.

An egregious example of how much journalism has degenerated. My latest at the Geller Report: It’s commonplace and universal: if you dissent from the Leftist agenda, you’re not going to get fair, accurate, or honest treatment from establishment media reporters. But in this hit piece on Hallandale Beach Commissioner Anabelle Lima-Taub, who called Muslim Rep. […]
Read in browser Â»

TRUMP STANDS FIRM ON WALL, SLAMS 'RIGID' PELOSI: In a wide-ranging interview before the Super Bowl and ahead of Tuesday's State of the Union address, President Trump vowed to win the partisan battle over his long-promised border wall and said Democratic House Speaker Nancy Pelosi is "very bad for our country" and "doesn't mind human trafficking" at the border ... "I think that she was very rigid -- which I would expect -- but I think she is very bad for our country," Trump said. "She knows that you need a barrier. She knows that we need border security. She wanted to win a political point."
With the official White House theme for speech being "Choosing Greatness," the president is expected to strike a more conciliatory tone and emphasize unity in his State of the Union address. But he is clearly not backing down from his demand for funding for a border wall. The government is currently funded through Feb. 15 but could be shut down again if a bipartisan group of lawmakers doesn't reach an agreement over a budget, with the border wall a clear sticking point. Both Democrats and Republicans - Trump and Pelosi - remain far apart on that issue. President Trump has repeatedly suggested he will call a national emergency if Congress does not provide funding for a wall.