For those who missed our RIGHT SIDE PATRIOTS 'Christmas Special' (or just want to listen in again) where we discussed both the history and traditions of the holiday, and recited a very special RIGHT SIDE PATRIOTS retelling of 'The Night Before Christmas,' it will be rerun tonight at midnight and throughout the week on American Political Radio at bit.ly/2cpXuRd

Or you can listen in on the cloud at the time of your choosing at:
https://soundcloud.com/right-side-patriots-260798913
Posted by Diane Sori at 8:47 PM No comments:

‘Twas the Night Before Trumpness

By: Craig Andresen and Diane Sori / RIGHT SIDE PATRIOTS

‘Twas the Night before Trump, took over the job


And snowflakes everywhere, were a quite angry mob.


Their spirits were drooping, they just didn’t care,


They had been so sure Hillary would be there.

Conservatives were nestled, all snug in their beds,


While visions of greatness, danced in their heads.


I was wearing my 'Make America Great Again' cap,


And we had just settled our brains from 8 years of crap.

When out on the lawn, there arose such a clatter,


I sprang from my recliner to see what was the matter.


Away to the window I flew like a bat,


Tore open the curtains and frightened the cat.


The moon on the breast of the new fallen snow,


Shown the harsh light of truth on what was below.


When what to our wondering eyes did appear,


But a stretch limousine and gold-plated reindeer.

A glowing orange driver, with the hair of a frump,


We knew in a moment, it had to be TRUMP!


More rapid than eagles, his cabinet they came,


And he whistled, and shouted, and called them by name!


On Perry and Price, and Mad Dog and Carson.


Between killing ObamaCare, and building the wall,


Trump pulled out his phone to gave Bibi a call.

As dry leaves that before the wild hurricane fly,


When the Donald said Jump, they asked him how high.


So up to the house top the cabinet they flew,


With a sleigh full of joy, and Mister Trump too.


And then in a twinkling, we heard on our roofs,


The prancing and pawing of gold-plated hoofs.


As I drew in my head, and was turning around,


Into the White House he came with a leap and a bound!


He was not dressed in fur, from his hair to his shoes,


He was wearing Armani, in subtle grey hues.


A bundle of fun, he had flung on his back,


He looked in control, he was leading the pack. 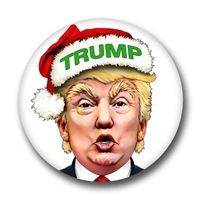 His eyes – how they twinkled, his mood – it was merry,


His droll little mouth was drawn up like a bow,


And both of his chins were as white as the snow.


What was left of islamists he clenched in his teeth,


While the smoke from his ears circled his head like a wreath.


He had a broad face, and a round little belly,


That shook as he laughed like a bowl full of jelly.


He was bigger than life, and ready to lead,


And I smiled when I saw him, he‘s just what we need.


And before I knew it, Obama’s mandates were dead. 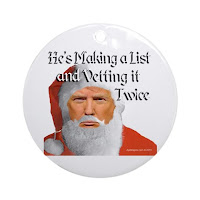 He tweeted his orders and went straight to his work,


He called Sharpton an idiot and Jackson a jerk.


He gave liberals the finger and ISIS a thumping,


And before he was done, he gave the media a lumping!


He sprang to his limo, to his team he did shout,


Let’s finish that wall and kick the illegals all out!!!


But I heard him exclaim, ere he got up to go… 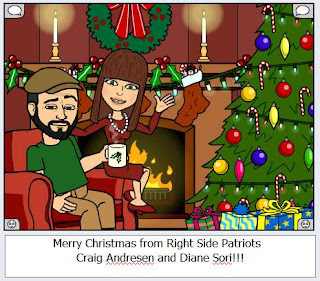 A very special Christmas gift to all my blog followers...it's an amazing version of Leonard Cohen's Hallelujah sung by an amazing little girl but adapted for Christmas, and its beauty brings with it hope for a return to greatness. Enjoy.

The Islamic State has reportedly released a “holiday hit list.”

According to the news site, Vocativ, the Islamic terror group published the names and addresses of thousands of U.S. churches - as well as other potential targets - and urged its supporters to attack during the holidays.

The messages were posted Wednesday night in ISIS’s social media group,“Secrets of Jihadis,” on Telegram, an app that allow users to send encrypted and self-destructing messages to one another.

One user by the name of Abu Marya al-Iraqi posted a message in Arabic calling “for bloody celebrations in the Christian New Year.” He also mentioned the Islamic State’s hope to employ lone wolf attackers to “turn the Christian New Year into a bloody horror movie.”
Another post urged “the sons of Islam” to target “churches, well-known hotels, crowded coffee shops, streets, markets and public places,” and provided a list of addresses in the United States, Canada, France and the Netherlands.
The pro-ISIS social media group also uses Telegram to provide its members with instruction on how to create and detonate explosives, as well as how to use weapons, said Vocativ.
Fortunately, two terror attacks have already been preempted this holiday season. FOX News discusses the events surrounding these in the clip below.

“This puts Israel in a very poor negotiating position and is extremely unfair to all Israelis.” Trump is right. One may hope that he will recognize that Israel is on the front lines of the global jihad that the U.S. and the rest of the free world also faces, and proceed accordingly. “Trump warns UN […]

“Failure by the U.S. to veto the measure was seen as a double-cross of America’s key Middle Eastern ally, and attributed directly to outgoing President Barack Obama, who has had chilly relations with Israel throughout his eight-year tenure.”

It’s Obama’s last betrayal of Israel and last stab at Netanyahu. This petty, treasonous Jew-hater will soon leave the White House and a big mess for Trump to clean up — including repairing relations with our foremost ally in the Middle East.

A “shameful” abstention by the U.S. in a United Nations vote Friday allowed passage of a resolution condemning Israeli settlement expansion in the occupied West Bank.

Read entire article here: http://pamelageller.com/2016/12/shameful-obama-kerry-engineer-us-abstention-un-vote-condemning-israel.html/
Posted by Diane Sori at 8:34 AM No comments: