FBI agent Peter Strzok and bureau lawyer Lisa Page sent each other tens of thousands of texts. Strzok was a top counterintelligence agent at the bureau. He was having an extramarital affair with Page, taking swipes at Trump and obviously showing bias towards Hillary Clinton; the two really wanted her to be the next president. All of these communications sent during the FBI’s email probe into Hillary Clinton and the counterintelligence investigation into the Trump campaign concerning possible collusion with the Russians.

For the Russia probe that’s now head up by Special Counsel Robert Mueller, Strzok signed off on it in July of 2016. In August of 2016, he sent a text to page regarding their meeting with now ex-Deputy FBI Director Andrew McCabe about “an insurance policy” against a Trump win. What is that? Well, some has suggested it could be a reference to the Trump dossier, which is said to have been used to secure FISA warrants against members of the Trump team. The dossier has not been fully corroborated. It’s also a piece of opposition research funded by the Hillary Clinton campaign. Fusion GPS was paid by the Hillary team to find dirt on Trump, GPS then contracted former MI6 spook Christopher Steele to compile information.
Read more »
Posted by Diane Sori at 8:54 AM No comments:

White House Press Secretary Sarah Huckabee Sanders released a statement Friday about President Trump's decision to declassify the much anticipated memo that details specific FISA violations at the FBI. It was compiled by Republicans on the House Intelligence Committee, led by Chairman Devin Nunes.

In her statement, Huckabee Sanders notes that Trump did not make the decision to declassify on his own. 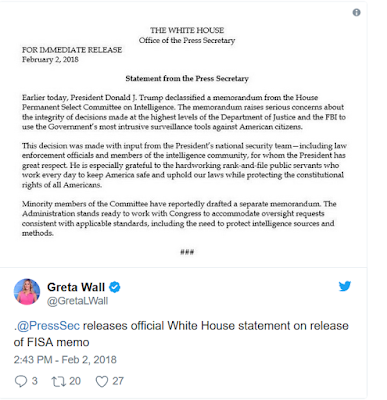 Having read the memo, Trump told the press that there are a lot of people who should "be ashamed of themselves."

The document reveals that the FBI used the infamous Fusion GPS dossier to obtain a FISA warrant against members of the Trump campaign during the 2016 presidential election.

For Hamas-linked CAIR, the concept of “hate speech” is just a weapon it uses to marginalize and silence those whom it hates. It doesn’t really have any concern for incitement to violence against people, or else it would be speaking out strongly against these imams. But of course, the staff of Hamas-linked CAIR knows that […]
Read in browser »

This asshat should tell it to the hundreds of thousands of jihadis waging holy war citing Qur’an chapter and verse in the cause of Islam, screaming “Allahu akbar.”

UK: Govt's "terror watchdog": Fundamentally wrong to attach the word terrorism to any of the world's religions"
February 2, 2018, By Robert Spencer:

Hill is right: it is “fundamentally wrong” to use the phrase “Islamist terrorism,” because it is actually “Islamic terrorism,” no steps removed from Islam as such. Can Max Hill refute that assertion with references from the Qur’an and Sunnah? Why, of course not. I’m certain he has never read the Qur’an or Hadith; if he cares to prove me wrong, I’ll be right here, but of course he will take no notice of the writings of an “Islamophobe.”

Read entire article here: https://gellerreport.com/2018/02/uk-govt-watchdog-lies-4-islam.html/
Posted by Diane Sori at 8:24 AM No comments:

Email ThisBlogThis!Share to TwitterShare to FacebookShare to Pinterest
RIGHT SIDE PATRIOTS...for those who missed last night's broadcast (or who just want to listen in again) where Craig and Diane discussed why Attorney General Jeff Session should be removed from office, and the release and ramifications of the FISA memo...you can listen in at your convenience on SoundCloud at: https://soundcloud.com/right-side-patriots-260798913/rsp-arch-2-2-18