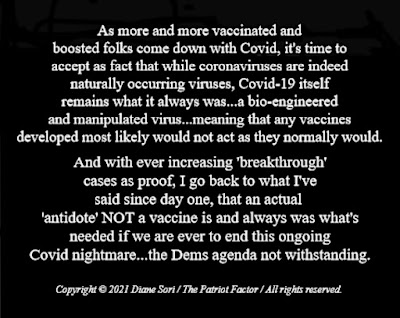 Three billion dollars of Texas taxpayer money has been devoted to this cause of Texas securing the border, and so we have a lot of money available to us to continue to build the wall. And Stuart, I'll add this, for Texas [this] is going to cost less than it did for the Trump administration for one reason. And that's because in...Read more and see videos here.
Posted by Diane Sori at 9:01 AM No comments:

On Friday night the Sixth Circuit Court of Appeals in a 2-1 ruling reinstated the Biden administration's vaccine mandate for private businesses of 100 or more employees, which overturns a stay from the Fifth Circuit Court of Appeals. The mandate was set to go into effect on January 4, less than a month away, but had been tied up in the courts since President Joe Biden made the announcement on November.

A major basis of the lawsuit has been that the Occupational Safety and Health Administration (OSHA) does not have the authority in this instance to mandate vaccines or regular testing for COVID. Friday's latest ruling, however, argues that it does.

"We therefore take a holistic view of the language that Congress chose to include in its statutory authorization to OSHA," the opinion by Judge Jane B. Stranch read at one point.

"Longstanding precedent addressing the plain language of the Act, OSHA’s interpretations of the statute, and examples of direct Congressional authorization following the enactment of the OSH Act all show that OSHA’s authority includes...Read more and see tweet here.

Posted by Diane Sori at 8:42 AM No comments: