Barack Obama and John Kerry know they want peace. And they couldn’t be wrong, could they?

“Iran Launches Haifa Missile Strike Game on Nuke Deal Deadline,” by Ari Yashar, Arutz Sheva, July 11, 2015 (thanks to The Religion of Peace): Not only was last Friday “Death to Israel Day” in Iran, and a third deadline […]

The only thing more dangerous than the jihadists in our midst are their patrons and benefactors.

The Obama administration has been and is importing hundreds of thousands of Muslims from jihad nations. No vetting for jihad is being done. The real victims of the global jihad are the Christians and religious minorities, they are not being offered refuge or asylum here in the US, or are held up by unspecified red tape, as in this case.

“After Four Months, Why Are 20 Chaldean Iraqi Christians Who Fled ISIS Still Detained by Immigration Officials?,” by Ray Nothstine, Christian Post, July 10, 2015:
Despite having family members to sponsor them, a group of 20 Chaldean Christians who fled ISIS have been detained for over four months at...
Read the whole entry »

Email ThisBlogThis!Share to TwitterShare to FacebookShare to Pinterest
Op-ed:
Five Steps to Solving the Immigration Conundrum
By: Diane Sori / The Patriot Factor / Right Side Patriots on cprworldwidemedia.net

"We have a sovereign country, and we have the right to enforce our immigration laws, irrespective of how you feel about immigration at large."
- Florida Senator and Republican presidential candidate Marco Rubio

'Tolerate'...a word that has come to symbolize all that is wrong in America today as we are told we must 'tolerate,' for example, those behaving badly...we must 'tolerate' those out to kill us all...we must 'tolerate' demands done in the name of political correctness...and so much more. And why must we 'tolerate' all this...simply because we have allowed Congress...and a now red Congress to boot...to sit back and basically do NOTHING as they cower in fear of the race card being used against them if they dare to do what they know in their hearts is the right thing to do.

And now on top of everything else we must add in that, to date, we are being forced to 'tolerate' those whose presence here in our country negatively affects NOT only our economy, but the health, safety, and welfare of us all. ILLEGAL aliens...or as I more accurately call them 'criminals' because the very way they came to our country was done by breaking our laws...have NO legal right to be here and we are under NO obligation to allow them to stay here for nowhere in the Constitution does it say that America must be the refuge of those who break the law. And when you add in that thanks to the politics and policies of Barack HUSSEIN Obama, state and local governments have been instructed NOT to turn over those ILLEGALS federal agents request be turned over...and that includes convicted felons...you just know we are in serious trouble.

Serious trouble as there are over 22+ million ILLEGALS in our country who...while some did most assuredly come here for a better life and are working hard to that end...the vast majority are here to bilk our welfare and medical system, to take our jobs, to commit crimes including robbery, rape, and murder, and to generally create Obama sanctioned havoc...as they easily cross our unsealed southern border. And with immigration officials overwhelmed by the sheer numbers coming across said border coupled with Obama's mandated rules...rules designed to actually increase ILLEGAL numbers which in turn increase the Democratic voter base...they are basically left powerless to halt the ever increasing so-called 'brown-flow' that shows NO real sign of abating.

And while some politicians, elected officials, and most assuredly 'We the People' do recognize the problem at hand, the main solution being offered by some...by many...is just NOT a doable reality as calling for the mass deportation of 22+ million people will NOT ever happen. And while convicted felons should and must be deported post-haste, the fact is that the majority of ILLEGALS NEVER will be...people best get used to that for that is indeed reality. And also something that must be accepted as reality is that some kind of immigration reform will indeed happen NO matter how loud or how long some continue to yell 'deport.'

Immigration reform is the only thing that will actually stem and halt the flow coming across our border and it starts NOT with sealing the borders as most think as it will take time to actually build a fully operational fence...and I am speaking of an electrified fence that spans our entire southern border as the only true deterrent... but...as we build the fence...there are some things we can do right now to put an immediate stop to America being seen as the free ride haven for all.

And 'sanctuary cities'...where policies and/or laws limit the extent to which law enforcement and other government employees are able to assist the federal government on immigration matters...are now the main point of contention what with the recent murder of Kathryn Stienle by five-times deported, Juan Francisco Lopez-Sanchez, the ILLEGAL criminal with seven prior felony convictions. The man who took refuge in the 'sanctuary city' of San Francisco was freed by San Francisco authorities under Obama's 'sanctuary policy' where ILLEGALS are protected but the public is NOT protected from them. And even with their knowing about Lopez-Sanchez's past the local authorities still could NOT come up with even one valid reason to continue to hold him even though ICE officially recognizing him as a threat to public safety if he remained in the U.S...amazing isn't it.

And in an effort to cover-up this oh so grievous action, San Francisco Sheriff Ross Mirkarimi said and continues to say that his department was right in following both 'procedure' and local laws this past April, when after a years-old but still in effect arrest warrant on drug charges against Lopez-Sanchez were dismissed, they chose to release him instead of surrendering him into the custody of federal immigration officials as requested.

But what happened in the 'sanctuary city' of San Fransisco is NOT a new occurrence nor is it an isolated incident NOT by a long shot. And with some claiming that San Francisco and other 'sanctuary cities' are directly violating Section 642 of the 'Illegal Immigration Reform and Immigrant Responsibility Act of 1996' (8 U.S.C. §1373)... which states that it's a violation of federal law for any state or local government to “prohibit, or in any way restrict” law enforcement or other government officials from sending or receiving information from the federal government on the “citizenship or immigration status, lawful or unlawful, of any individual”...battle lines of sorts have been drawn between Democrats who support 'sanctuary cities' and Republicans who rightfully want them gone.

Thankfully, the public overwhelmingly agrees with the Republicans as a recent Rasmussen poll found 79% of Republicans and 65% of unaffiliated voters support the DOJ taking legal action against 'sanctuary cities' but that only 43% of Democrats support such action. And with 62% of actual 'likely voters' agreeing and but 26% opposing said action coupled with the fact that 58% agree as opposed to 32% who disagree that the federal government should cut off all funds to 'sanctuary cities' the voice of 'We the People' you think would be heeded by those on Capitol Hill, but with a weak and gutless Congress there is NO guarantee it will be.

Also, remember serious immigration issues have been happening throughout the entirety of Obama's presidency beyond just 'sanctuary cities' including the fact that of the 97% of ILLEGALS who enter the U.S. through the almost 2,000-mile long border between us and Mexico only 20% are caught...a statistic for the most part remaining to this day. For example, in 2010, the Border Patrol reported that 212,202 ILLEGALS were caught in the Tucson, Arizona, sector alone, but that for every ILLEGAL they caught another 2.7 successfully made it into this country undetected. And if that figure alone doesn't get you angry how about this...of those that were apprehended nearly 30% of them already had a criminal record here in this country...meaning they were caught and jailed but somewhere down the line were let go to freely re-enter our country ILLEGALLY once again...to freely commit criminal acts again.

As was the case of 5-times deported murderer Juan Francisco Lopez-Sanchez...one of more than 120 convicted murderers released all across America in just the past few years of Obama's watch. 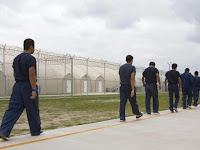 And this releasing of ILLEGAL criminals continues to happen even though hundreds of millions of dollars are given to states each year to compensate them for the cost of jailing said criminals. And they greedily accept the monies yet these very same states refuse to keep these criminals...these ILLEGALS...in jail where they belong. Choosing instead to turn a blind eye to what they know these people are capable of doing, the authorities willingly release them back into an unsuspecting public to make room for even more ILLEGALS until they in turn are released...and the vicious cycle continues on with innocents becoming the victims of on-purpose bureaucratic blunders run amok. And run these ILLEGALS do straight to an afore mentioned 'sanctuary city' even though all ready on the books federal law states that the local authorities must turn over identified ILLEGAL criminals to ICE for deportation after the ILLEGALS have first served any local jail time.

So know that even if the shouts of 'deport' do NOT die down immigration reform will indeed happen... must happen...one way or another. And isn't it better if we Conservatives control how said reform is written, implemented, and adjudicated better then allowing the Democrats to do so...I would surely think so. So lets unite all factions of the 'right' together to get the best reform we can...let's get that border sealed; let's enforce the laws already on the books; and lets remove the designation 'sanctuary city' along with their funding as sanctuary must NEVER willingly be given to those who knowingly break our laws. And know that we can get immigration reform right if and only if we Conservatives control it...period.