As chatter about the prospect of the United States going maverick in Syria continues, the Nation’s international peers are receiving praise from some U.S. lawmakers for taking a more thoughtful approach to intervening in the Middle Eastern conflict.

Representative Scott Rigell (R-Va.) lauded the British Parliament on Thursday, noting that U.S. lawmakers are still on recess— despite the President’s war rhetoric— while the Brit lawmakers have robustly debated a resolution on military intervention in Syria.

The Parliament, he said, is having a debate, while the United States is not. “Given the history our two Nations,’ he continued, “there is a bit of irony here.”

Rigell said that he is happy to see that the evident slowing in British momentum towards military action has made the White House pull back “just a bit.” The lawmaker also noted that Congressional approval prior to intervention would be a sign of strength for the U.S. 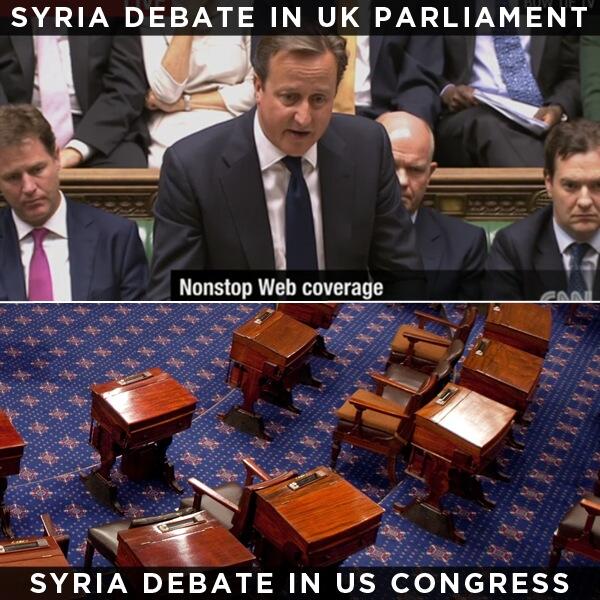 Email ThisBlogThis!Share to TwitterShare to FacebookShare to Pinterest
This just got sent to me:

Fox News has a blockbuster report published tonight which sheds further light on why the Obama administration has been involved in a massive cover up surrounding the Benghazi terrorist attack.

New reports indicate that rebels allied with al-Qaida were being trained in Benghazi and then sent up to fight in the Syrian civil war against the regime of Bashar al-Assad. These include terrorist networks involved in the September 11th terrorist attack on our U.S. compound in Benghazi.

The Obama administration knows that if the American people were to learn that they were helping fund, train and transport al-Qaida terrorists to fight in Syria - some of whom were behind the Benghazi terrorist attack that killed 4 Americans and injured countless others, there would be a severe backlash from the American people.

Here's the headline from Fox News and an excerpt from their report:

Ansar al-Sharia, the al Qaeda-affiliated militia that U.S. officials say orchestrated the Sept. 11 attacks on the U.S. diplomatic compound and a CIA facility in Benghazi, is running several training camps for jihadists in Benghazi and nearby Darnah, another port city further east, said officials who discussed some details of the camps on condition of anonymity.

The officials said the terror training camps have been in operation since at least May and are part of a network that funnels foreign fighters to Syrian rebel groups, including the Al-Nusra Front, the most organized of the Islamist rebel groups fighting the Bashar al-Assad regime in Damascus.

The Obama administration is demonstrating once again that it is the most deceitful and manipulative presidential administrations in our nation's history.
Posted by Diane Sori at 12:20 AM No comments:

To all my blog followers...

2013 RightOnline Convention and
The Defending the Dream Summit

Like most girlie-patriots I am grossly over-packed for the 3-1/2 days I'll be gone but I had to pack enough spikes and platform wedges to go with every outfit I'm bringing...and I'll probably end up in jeans most of the time...LOL

Will be doing a lot of interviews up there and meeting up and having a blast with Wild Bill and others from fb-land...and meeting Ted Cruz, Bobby Jindhl, Rick Perry, Michelle Malkin, and others.

Will post pics when I can. Will also be checking my blog daily when time allows and will post articles, but I will NOT have time to write an original op-ed until Monday.  Please bear with me as this is one very important convention and summit.