Fox News Host Laura Ingraham told viewers on Wednesday that she uncovered information about a meeting that took place in Jan. 2016 among officials in the Obama White House, the alleged whistleblower and various Ukrainian officials. Discussed during the meeting were concerns about Hunter Biden's position on the board of Ukrainian company Burisma Holdings and how Hunter's position would impact prosecution efforts against the company.

Ingraham reportedly obtained a copy of an email conversation between State Department official Kate Schilling and New York Times reporter Ken Vogel. The email chain shows the New York Times reporter was writing a story about the meeting in question, specifically the concerns about Hunter Biden and Burisma.
(Via the Washington Examiner) 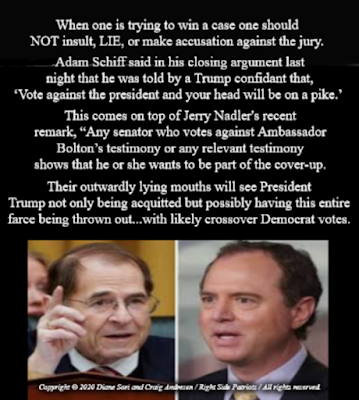 Email ThisBlogThis!Share to TwitterShare to FacebookShare to Pinterest
RIGHT SIDE PATRIOTS...For those who missed last night's show or just want to listen in again...where Craig Andresen and Diane Sori discussed and dissected in detail the ongoing Senate Impeachment Trial...you can listen to it (and previous shows) at your convenience on our PodBean hosting/archive site. Click here: https://rightsidepatriots.podbean.com/ to go directly to our podcasts and hope you become 'followers' of RIGHT SIDE PATRIOTS. And our podcasts are now also on Spotify at: https://open.spotify.com/show/2ZfPSVcjon4DhpHcuAl3BT?si=R6DsTh1uQE2Rejlj2ACKkw