Highly anticipated. Abuzz. Blockbuster. These are words that were floating around yesterday ahead of ABC airing the George Stephanopolous interview of former FBI Director and current Trump foil James Comey.

Not to mention the unspoken one from Loretta Lynch: dishonest.
On Sunday night, the big interview aired, and of course all the more buzz and gossip followed. The most talked-about moment was when Comey called President Trump “morally unfit” for office.

Not exactly going out on a limb there but a newsworthy soundbite I guess.

There were other highlights worth noting. ABC News released some of the top moments from the interview. Watch.

Hundreds of Muslims from Bangladesh illegally crossing into US at Laredo, Texas
By Robert Spencer / Jihad Watch

Email ThisBlogThis!Share to TwitterShare to FacebookShare to Pinterest
Attack on Pamela Geller and the GELLER REPORT...
#WAR
http://www.icontact-archive.com/QkQ6e9vuzWCVegblviTIpN-S1qKVzWit?w=3 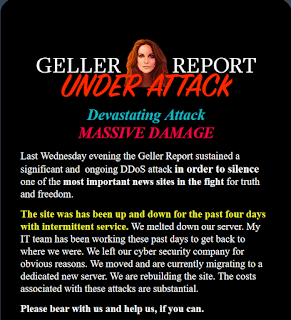 Email ThisBlogThis!Share to TwitterShare to FacebookShare to Pinterest
Syria attack: ‘Huge blast’ at Iranian military base in Aleppo after ‘fighter jet attack’

When I first heard the news that the US was conducting strikes in Syria, it made no sense to me. To what end? In my initial coverage I asked, what’s the objective? To engage Iran? It seems I may have been right.

A HUGE blast was heard near an Iranian military base in Syria this evening, amid unconfirmed reports it was attacked by unidentified aircraft.

By Mark Chandler, The Express

The base was in the Jabal Azzan region south of Aleppo, a Syrian government-controlled rural region.

People claimed to have seen explosions at the site and there are unconfirmed reports of casualties.

Syrian media reported it was attacked by Israeli aircraft this evening

The Syrian Observatory for Human Rights, a Britain-based war monitor, reported the blast but said the cause was unknown.