The Trump campaign on Wednesday dropped a new ad about alleged voter fraud that took place in the swing state of Georgia on Election Day.

"America deserved an honest election. This is what they caught," the voice over says as footage pans to security footage allegedly showing suitcases of ballots being wheeled into the ballot counting area. "Suitcases of ballots and out of state voters and illegal aliens voting, dead people voting in Wisconsin, poll watchers denied access in Pennsylvania, Trump votes discarded in Arizona, and clerks facing felony charges in Michigan."

"The evidence is overwhelming," the ad states.

The voiceover ends the ad by encouraging voters to contact their state legislators and governors to "demand they hear the evidence" to "help President Trump."

President Trump Vetoes Defense Spending Bill, “It Is A Gift to China and Russia” 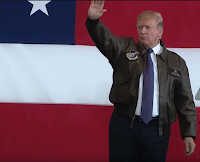 President Trump vetoed the National Defense Authorization Act for Fiscal Year 2021 Wednesday, calling it a “gift” to U.S. adversaries China and Russia, making good on a promise to veto it if it did not repeal a law that shields certain Big Tech companies from liabilities.

There is too much wrong with the bill.