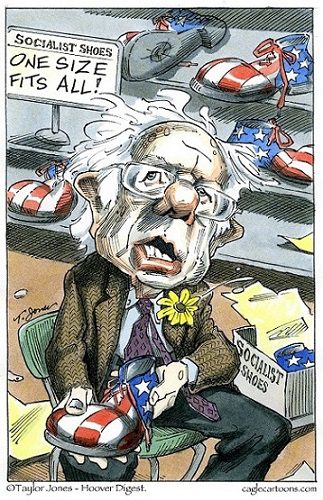 The American economic system, and in fact the world’s economic system is failing, and that failure is being attributed by many on the left (and some on the right) as a failure of capitalism.

This false notion has given rise to Bernie Sanders and his preaching of social democracy. How has this happened?

Every writer and every commentator and every politician in America refers to the U.S. as a democracy of free enterprise capitalism with individual privacy and property rights. This is a big laugh to any sober person.

The system and its paid politicians still repeat high-sounding terms like “freedom of the individual” and “free enterprise,” which sedates the madding crowd. The terms “private” and “freedom” no longer mean what they once meant. They are cruel deceptions that fool the mind yearning for human freedom.

The fact is that in America we have massive regulation and regimentation. This is necessary, we are told, because it is “in the public interest.” It all spews forth out of “democracy” as if a Biblical word and a holy sanction. Terms like “public interest” and “common good” are code words that mean police state and reduced liberty.

Navy SEAL Charlie Keating IV was a real-life Batman—a self-made superhero. On behalf of our troops and veterans, it is important to properly honor this 31-year-old Millennial—who gave the ultimate sacrifice at the hands of ISIL thugs in Iraq last Tuesday—but was painted as the progeny of a pilferer.
The Bronze Star Medal with Combat “V” recipient courageously took on some 125 ISIS fighters and 20 assault vehicles to rescue a handful of U.S. military advisors. All of the advisors escaped—but their rescuer, Keating IV, was fatally hit. For this sacrifice, outlets like CNN honored Keating IV by telling the world he was the grandson of a man who “served time for fraud, racketeering and conspiracy.”

“U.S. Navy SEAL Dies at Hands of ISIL ID’d as Grandson of S&L Financier Charles Keating” declared the front page of USA Today. The newspaper devoted the same amount of space (four paragraphs) to the late SEAL as to his grandfather’s involvement in the 1980s savings-and-loan crisis.

NBC and many others were also quick to turn a heroic tragedy into blood money. In truth, Keating IV was a celebrated athlete who was so moved by the 9/11 attacks that he gave up a promising track career to enlist.

John Kerry criticized Republican nominee Donald Trump's foreign policy agenda during a commencement speech at Northeastern University on Friday by saying that international barriers are "nostalgia for some rose-tinted version of the past."

"Many of you were in elementary school when you learned the toughest lesson of all on 9/11," he said. "So I think that everything that we've lived and learn tells us that we will never come out on top if we accept advice from sound-bite salesmen and carnival barkers who pretend the most powerful country on Earth can remain great by looking inward.  And hiding behind walls at a time that technology has made that impossible to do and unwise to even attempt."

"The future demands from us something more than a nostalgia for some rose-tinted version of the past that did not really exist in any case," he added. "You're about to graduate into a complex and borderless world."

During a press conference last month, Trump said, “We will no longer surrender this country, or its people, to the false song of globalism."

“Under a Trump Administration, no American citizen will ever again feel that their needs come second to the citizens of foreign countries.”

“In its latest bid to tackle the biggest migration crisis since World War II, the European Commission proposed making countries pay a ‘solidarity contribution’ of 250,000 ($290,000) euros per refugee they decline to take.”—from a May 4 news report This extraordinary news shows how far the European Union, the Party of Good, the Party of […]

Ohio Attack Victim: I Didn’t Come to America to Hear the President Preach About Islam

A devout Muslim goes into an Ohio restaurant with a machete and starts hacking up the patrons because the owner is an Israeli Christian. This is a news story that was virtually ignored by the enemedia. If a “right wing” Christian ever walk into a Muslim restaurant and started hacking (which has never happened), it would be the biggest story since 9/11. But Muslims hacking Christians and Jews? Not news. Typical.


“Ohio Attack Victim: I Didn’t Come to America to Hear the President Preach About Islam…” Breitbart, May 7, 2016 (thanks to The Religion of Peace):
TEL AVIV – The Israeli Arab owner of the Columbus, Ohio, restaurant attacked by a machete-wielding Muslim immigrant from West Africa in February...