WASHINGTON - The American people are overtaxed by a waste-ridden government whose grotesquely swollen budget could be shrunk by hundreds of billions of dollars without harming its necessary functions and programs.

We know this is true because of years of shocking audits produced by Congress's Government Accountability Office that have exposed massive levels of waste, inefficiency, duplication, mismanagement and thievery throughout the federal bureaucracy.

Keep this in mind the next time you hear the Democrats in Congress and President Obama proposing that we raise taxes on wealthier Americans who, they say, "aren't paying their fair share."

It's one of the great lies by the big spenders here, but the truth is that Americans at the top of the income scale pay most of the taxes.

Yet the myth persists, perpetrated by the Washington news media, liberal special interests and others. despite endless studies that prove otherwise.

A recent Pew Research Center survey found that some six-in-ten Americans said "they were bothered a lot by the feeling that 'some wealthy people' and 'some corporations' don't pay their fair share."

EPA Could Put Nearly 300,000 Jobs On The Chopping Block

Combating climate change has been a priority of the Obama administration, and there’s a new regulation to be released this summer that outlines significant reductions in greenhouse gas emissions. It aims to cut them by nearly 30 percent between 2025-2030. Based on the calculations by American Action Forum (AAF), this new regulation would force one-fifth of coal plants to close at an initial cost of 80,000 jobs. Yet, AAF also noted "secondary employment impacts," which could soar to nearly 300,000 jobs lost, which is roughly the population if Cincinnati:


Buried in one of EPA’s technical support documents, among more than 1,600 other supporting documents for the proposed rule, the administration detailed the economic implications of complying with building blocks one (heat rate improvements at coal plants) and two (increased natural gas dispatch rates and decreased coal usage). …
AAF used the 49 GW figure [the estimated amount of power lost with this new regulation] and EPA’s eGRID data to find the least efficient affected power plants, as measured by heat rate and pounds of CO2 emitted per megawatt hour (CO2/MWh). Anticipating that the least efficient coal facilities are most at risk for closure, AAF identified the 93 least efficient power plants that produced about 50 GW of power.
…
PA predicts that if states adopt only options one and two of the administration’s plan for power plants, 80,000 energy industry jobs will be lost to EPA climate regulations.

The victims “professed the Christian faith while the aggressors were Muslim.” It will be interesting to see how the mainstream media and Western government officials explain to us that this had nothing to do with Islam. “Police: Muslims threw Christians overboard during Med voyage,” Associated Press, April 16, 2015: ROME (AP) — Italy’s migration crisis […]

And these depraved animals weren’t expelled? Where are the other parents? Where are school officials? Speak about Islam in a public school and you will be ruined (as was this teacher in Texas) but this?

In a statement, school district brass noted that “the actions of these students are not representative of the student body at Commack High School. We do not condone or permit any form of discrimination, bullying, or hateful messaging.”

Then why aren’t these Nazis expelled? 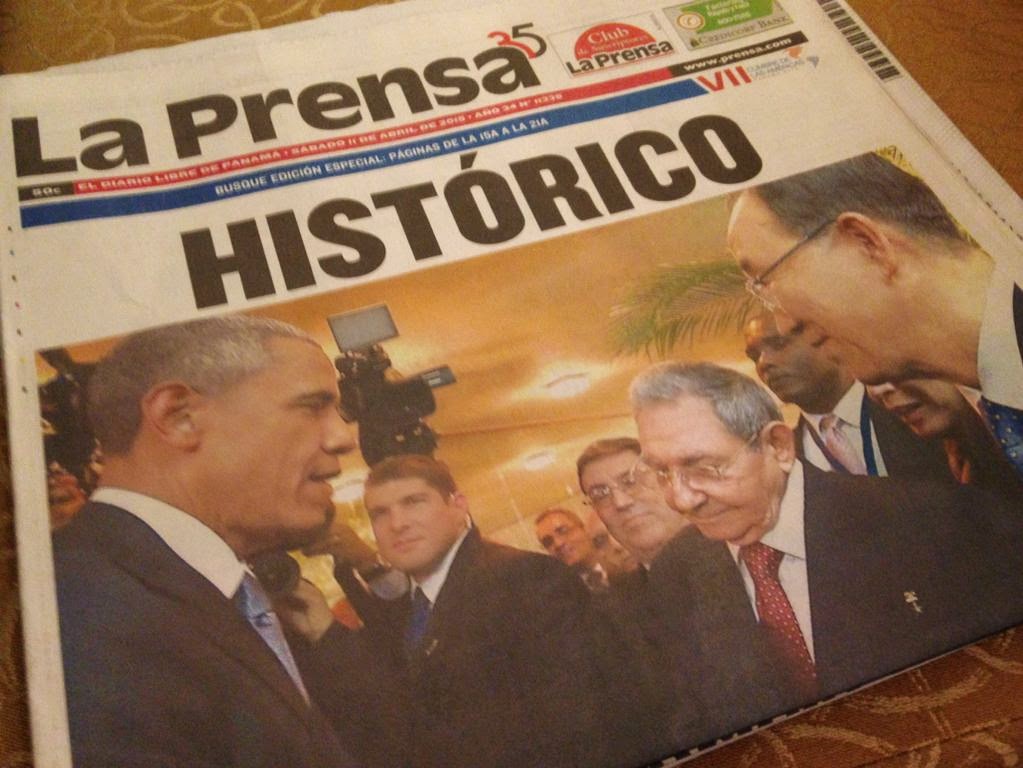 "Cuba is a state sponsor of terrorism..they should have remained on the list...and it sends a chilling message abroad that this White House is not serious about calling terrorism by its proper name."
- Sen. Marco Rubio, Republican presidential candidate and chairman of the Senate Foreign Relations Committee’s Western Hemisphere sub-panel

Well Obama has gone and done it again as he continues on his roll to undermine America’s standing in the world...this time by removing yet another one of America's enemies from the State Department's list of terrorism sponsors. First he removed Hezbollah, then he removed Iran, and now he's removing Cuba...a country just 90-miles off Florida's coast...proving once again where his true loyalties lie.

And so this past Tuesday, more than a half century after U.S./Cuban ties were broken and mere days after a first-time meeting with Cuban President Raul Castro at the Summit of the Americas in Panama...a summit Cuba had NOT attended since its inception in 1994...but just two months after Obama extended a 19-year-old so-called state of emergency against Cuba for their threatening to shoot down U.S. airplanes or sink U.S. ships in the waters north of Cuba...this most miserable of presidents told Congress that he had made the final decision to remove Cuba from this all-important list because according to him the Cuban government "has not provided any support for international terrorism over the last six months."

Forgetting...or much more likely ignoring...that first, terrorism knows NO time frame and second, terrorism comes in many guises NOT just in the guise of suicide bombings and beheadings...and terrorism in Cuba today equates to how the Cuban people are NOT only oppressed in the political sense but are living without basic human rights, dignity, and necessities. And in a country basically stuck in the 1950s, eleven million people continue to live at a poverty level that would astound while at the same time the Castro brothers and their ilk...true to form of dictators everywhere...want for nothing.

“Since President Obama came into power, his administration’s policy toward the Castro regime has been: ask, and you shall receive."
- Florida Rep. Illeana Ros-Lehtinen, a member of the House Foreign Affairs Committee 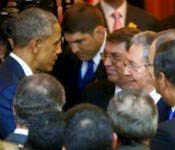 Cuba...a designated state sponsor of terror since 1982 due to its promoting armed revolution by terrorist organizations especially in Latin America and Spain...now has Obama saying that Cuba "has provided assurances that it will not support acts of international terrorism in the future."

And our traitor-in-chief expects the American people...expects Congress...to accept the 'word' of a dictator over the 'actions' of said dictator NO matter that Cuba continues to support and facilitate actions by other nations and groups that pose a national security threat to the United States, for example their helping North Korea evade international sanctions imposed on them by the U.N. And for these and other actions, Sen. Robert Menendez (D-N.J.) has said that Cuba should also remain on the terrorist list because it continues to harbor fugitives wanted in the U.S...fugitives like FBI-wanted convicted cop killer Joanne Chesimard who now goes by the name Assata Shakur, and who routinely espouses revolution and terrorism against the U.S...and William Guillermo Morales, a suspect in the 1970's NYC bombings claimed by the Puerto Rican FALN terrorist group.

And know that Cuba still provides a 'safe haven' for members of both the Marxist FARC rebels out of Colombia and members of the violent Basque separatist group ETA; that Cuba illegally held and imprisoned American businessman Alan Gross for five years; and so much more but all that matters to Obama is with his removing Cuba from the terror list it could result in diplomatic relations being restored via the opening of a U.S. Embassy in Havana and a Cuban Embassy in Washington D.C...a would-be feather in his currently tarnished legacy cap.

Also of note is that we do NOT gain economically from Obama's pandering to the Castro brothers as it's Cuba's needing to 'behave correctly', if you will, if they are to start any serious attempts at economic development and recovery...a much needed development and recovery Cuba claims the long-held embargo prevented them from doing...especially with their conducting business with American banks and international institutions. But according to a New York Times report Cuba 'found' a bank to do business with even before Obama's announcement, because get this...the Treasury Department usually takes “steps to ease the situation and facilitate” any such agreement.

I was never aware of that little bit of subterfuge, but with the Obama regime anything is possible if his royal highness deems it so.

And do NOT forget that this current 'behaving correctly' by Cuba is only until Raul Castro gets what he wants from Obama...as in a lifting of said embargo...for Cuba today remains as repressive and oppressive as ever. And while Obama's decision will most assuredly help the Cuban government attract both U.S. and foreign investments, the amount of American dollars needed to 'modernize' Cuba will reach up into the billions.

And what do 'We the People' get for our investment...nothing but our taxpayer dollars being used...being wasted...to support and bolster yet another dictatorial regime that does NOT like us very much...sad isn't it. 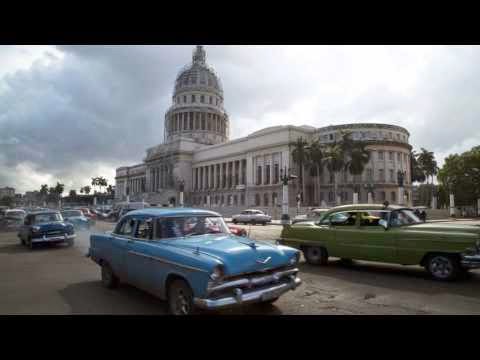 But while Obama took this step to restore diplomatic relations with the communist nation unilaterally...yet another in a long list of him going it alone...saying that times have changed and that he believes Cuba is NOT the “political thorn” it had been...under U.S. federal law a country cannot be removed from the terrorist list if it has NOT changed its policies and so long as the country is still supporting acts of international terrorism. And these are things which Cuba continues to do as they have taken NO tangible steps toward democratic reform as well as their continuing to have close ties with both Iran and Syria...with Syria still being on the terrorist list...making their recently issued government statement that “Cuba rejects and condemns all acts of terrorism in all their forms and manifestations,” nothing but empty words.

Thankfully, but with the outcome for the most part predetermined, Cuba's terrorism designation must remain in place for another 45 days before it can be approved...meaning Congress can and most likely will block Obama from taking Cuba off the terror list through a joint resolution prohibiting the move, but know Obama will veto it and with NOT enough votes to override his veto Barack HUSSEIN Obama will once again screw our beloved America while further emboldening the regime of yet another dictator of yet another communist country.

And so the man who just slapped Cuban-Americans in the face by his recently saying, “We don’t want to be imprisoned by the past...when something doesn’t work for 50 years, you don’t just keep on doing it. You try something new,” forgets history's most important lesson as said by George Santayana...”Those who cannot remember the past are condemned to repeat it,” and repeating it with a communist nation sitting but 90-miles off our coast could have very serious ramifications indeed.
Posted by Diane Sori at 12:03 AM No comments: