Time running out for Obama to turn around the economy

FoxNews.com
With two consecutive months of dismal job growth amid rising unemployment -- and just five months until Americans go to the polls to choose their next president -- the Obama administration is on the clock to show it indeed can “put Americans back to work."

That reality was underscored Friday by Labor Department reports that showed the jobless rate ticked upward in May to 8.2 percent, from 8.1 percent, and that virtually stagnant economic growth created only 69,000 new jobs -- the fewest in a year.

The White House and Obama were quick to defend the numbers, saying -- as they have since taking office in 2008 -- the problems were inherited.

“We’re still fighting our way back,” the president said during a campaign stop at a Honeywell facility in Golden Valley, Minn. “Our economy is still facing serious head winds.”

The president attributes the sluggish growth over the past few months in part to gas prices and the European debt crisis.

He also cast some blame on Congress for failing to pass his jobs proposal that includes income tax increases. His comments followed those of Alan Kruger, chairman of the president’s Council of Economic Advisers, who gave a similar account.

“Problems in the job market were long in the making and will not be solved overnight,” Kruger said on the White House blog. “The economy lost jobs for 25 straight months beginning in February 2008, and over 8 million jobs were lost as a result of the Great Recession.  We are still fighting back from the worst economic crisis since the Great Depression."

But Republican leaders and the president’s GOP challenger Mitt Romney sounded as if they had heard the explanation before.

"Another month of disappointing job gains,” said House Speaker John Boehner, R-Ohio.” It's pretty clear that the American people are hurting, small businesses continue to avert hiring any additional people, and it's clear that the policies that we've seen are not working."

“It is now clear to everyone that President Obama’s policies have failed to achieve their goals and that the Obama economy is crushing America’s middle class,” he said.

Larry Sabato, director of the University of Virginia Center for Politics, said the Obama-Romney race has always been about the economy, but the recent reports again push social issues into the background.”

Sabato also suggested the president’s timetable in now more a stopwatch than calendar.

“He’s got five more” monthly unemployment reports, he said. “That’s it. To get elected the president has to show improvement. Period.”

House Minority Leader Nancy Pelosi joined Democrats in pointing out highlighting in the slow recovery, including 27 months of adding jobs. But she acknowledged more needs to be done and used the report, like Obama, to urge Congress to act, particularly on a transportation bill in conference committee.

“With today’s jobs report it is clear we have work to do,” she said. “It’s clear one way we can help is to pass the (bipartisan) transportation bill.”

“While the president and Democrats in Congress have been promoting a jobs-first agenda to provide certainty to American businesses and workers, Republicans continue to avoid addressing serious job creation in favor of ideological bills,” said Hoyer, D-Md.

The unemployment rate for April fell to 8.1 percent, from 8.2 percent. But it was not good news because the percentage change was really an indication that many Americans had stopped looking for work and were no longer being counted in the unemployment rolls. In addition, the 115,000 payroll jobs added was small compared to numbers earlier in the year.

“I don’t see how you get re-elected with numbers like those,” Sabato said.

Posted by Diane Sori at 9:40 PM No comments: 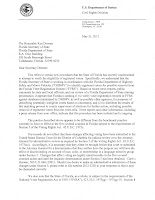 On Thursday, the Department of Justice (DOJ) demanded the state of Florida stop its efforts to purge non-citizens from its voting rolls. A letter sent to Florida Secretary of State Ken Detzner alleges the process violates the 1965 Voting Rights Act and the 1993 National Voter Registration Act.

The major charge of the letter reads:

On Thursday, the Department of Justice (DOJ) demanded the state of Florida stop its efforts to purge non-citizens from its voting rolls. A letter sent to Florida Secretary of State Ken Detzner alleges the process violates the 1965 Voting Rights Act and the 1993 National Voter Registration Act.

The major charge of the letter reads:


The Justice Department sent a letter to Florida Secretary of State Ken Detzner Thursday evening demanding the state cease purging its voting rolls because the process it is using has not been cleared under the Voting Rights Act, TPM has learned.

DOJ also said that Florida’s voter roll purge violated the National Voter Registration Act, which stipulates that voter roll maintenance should have ceased 90 days before an election, which given Florida’s August 14 primary, meant May 16.

The Miami Herald further explains that “Under the Voting Rights Act, Florida needs federal approval before it makes changes to voting because five Florida counties – Monroe, Hillsborough, Collier, Hardee and Hendry – had minority-voting troubles decades ago.” It also notes what has been done so far:

Independent voters and Democrats are the most likely to face being purged from the rolls. Republicans and non-Hispanic whites are the least likely.

“We are firmly committed to doing the right thing and preventing ineligible voters from being able to cast a ballot,” said Chris Cate, spokesman for Secretary of State Ken Detzner, responded to the Herald.

John Edwards got away with it all...or did he?
By: Diane Sori

Simply put...our jury system screwed up again as John Edwards got away with it all!

Following in the same footsteps as the OJ trial by ignoring all the evidence, another group of our peers let yet another low-life off the hook.  Yet we must accept this just like we accepted the OJ verdict, because that is our jury system...for better or worse.

While Edwards was found NOT guilty on the major count of knowingly engaging in campaign finance fraud, and with the jury deadlocked on the other five counts, Judge Catherine Eagles was forced to declare a mistrial.

Now the decision has to be made by the prosecution whether to retry Edwards or let it go.  I say let it go because I don’t want to see one more penny of our taxpayer dollars spent on this slime ball.  We all know that what he did is beyond reprehensible but NO punishment he could ever be given is worse than him having to look at himself in the mirror every day and see the face of a sinner looking back at him.

Let God decide his fate now as it’s no longer our place to do so.

John Edwards just couldn’t keep it in his pants while his wife was dying of cancer.  He had an affair that resulted in a child, then went on to lie to his wife and to the public after the affair was exposed.  Hundreds of thousands of dollars were spent to cover it up, and the jury just didn’t get it.  But none of that matters as the court of public opinion has already reached its verdict...guilty on all charges.

But with that guilty verdict what should the adjudication be...jail time, a fine, what?  No punishment we public jurors could ever give John Edwards will bring Elizabeth back, no punishment will undo the affair, and no punishment will ever cause this man to show even a moniker of true remorse, as witnessed by his dog and pony excuse of an apology.  “I did an awful, awful lot that was wrong,” Edwards said, all the while insisting that none of it was illegal.  “Thank goodness we live in a country that has the kind of system that we have.”

Yeah, John, thank goodness you were able to pull the wool over the jury’s eyes is more like it.

Elizabeth’s children have already lost their mom, are they to lose their dad also?  No matter how we public feel about John Edwards, the fact remains that his children still love him and have forgiven him.  What good would it do to take away their father also?

And as horrible as mistress Rielle Hunter is, we cannot take our anger out on the innocent child of their illicit affair.

John Edwards is finished; his reputation lower than that of a pig in mud; he will forever be an outcast and pariah amongst the moral, and rightly so.  Maybe that is punishment enough...only time will tell.
Posted by Diane Sori at 2:22 PM No comments: