Confusion Over IRS’ Obamacare Requirements Could Cause More Than 500,000 to Lose Health Insurance Subsidies

Open enrollment in the Obamacare-created federal Health Insurance Exchange is scheduled to begin on November 1, and many consumers returning to the exchange or signing up for the first time are in for a rude awakening. Millions of Americans’ health insurance premiums are expected to rise and hundreds of thousands more could find themselves without any health insurance subsidies at all in 2016.

According to a report by The Wall Street Journal, federal officials said on October 26 the average price of “silver plan” health insurance offerings, a middle-tier insurance option in the exchange that’s used as a “key metric for premiums around the country,” is expected to increase by 7.5 percent across the 36 states that rely on the federal exchange.

The Journal also reports that the majority of enrollees in the exchange will have to endure higher prices: “And 60% of enrollees – across 30 of the largest markets in the U.S. – will see the average rate for that benchmark plan rise by 6.3%, according to a Health and Human Services report on premium data that hasn’t yet been made fully public.”

In addition to higher health insurance costs, hundreds of thousands of Americans could lose their health insurance subsidies in 2016, which will likely lead to gigantic – possibly even insurmountable – added costs.

Under federal law, any individual who fails to file a tax return for the previous tax year will risk losing 100 percent of federal subsidies received to help offset health insurance costs. According to The New York Times, “In July, the Internal Revenue Service said 710,000 people who had received subsidies under the Affordable Care Act had not filed tax returns and had not requested more time to do so.”


…[R]egulators have already imposed $26 billion in annual costs to limit GHGs and have proposed an additional $1.7 billion. However, to meet President Obama’s climate goals the nation will have to spend up to $45 billion more each year by 2025.

What are the benefits of these investments? According to the Environmental Protection Agency (EPA) estimates, previous actions will avert a combined 0.0573 degrees Celsius of warming. Meeting the president’s 2025 goals could add reductions up to 0.125 degree Celsius. In other words, full achievement of the president’s climate goals will cost more than $73 billion in annual burdens to alleviate less than two-tenths of one degree of warming.

Of course, the president’s Clean Power Plan is factored into all of this, which aims to cut greenhouse gas emissions by 32 percent from 2005 levels by 2030. Already we have studies showing that it will disproportionately impact fixed-income seniors, and most of rural America. Moreover, everyone knows it will increase energy costs. Secretary of State John Kerry is working to make sure the U.S. leaves Paris with something that isn’t a treaty since there’s a slim chance of getting it through a Republican Congress. The administration’s Clean Power Plan already has over half the states opposing it. Both Democratic and Republican attorneys general have joined a lawsuit against the president’s agenda. As of now, states have until September 6, 2016 to submit their blueprints that balances their energy needs with CPP’s goals. Those who fail to submit one will have a federal plan imposed until a state-centered strategy is drafted. Like Obamacare, we have another serious policy fight ahead, one that isn’t being discussed much on the 2016 campaign trail.

“Then I saw women interviewed. They said, ‘We want to wear it. We’ve worn them for a thousand years. Why would anyone tell us not to?’ They want to! What the hell are we getting involved for? In fact, it’s easier. You don’t have to put on makeup.” Yes, the burqa, the niqab and even […]


This story is related to this eye-opening piece about how Moscow is using Obama’s disastrous post-American foreign policy to batter American credibility abroad. Obama has presided over a decline in American power and prestige that could not have been anything but deliberate. I warned that this was coming in my book about Obama, The Post-American Presidency: The Obama Administration’s War On America: Obama subscribes to the far-left idea that the problem with the world is America as a superpower, and that if America were weakened politically, militarily, and economically, the world would be at peace. He has pursued that vision throughout his presidency. We will be paying for it for generations to come.

TODAY, Saturday, October 31st on RIGHT SIDE PATRIOTS on CPR Worldwide Media from 11am to 1pm EST, Craig Andresen and Diane Sori will discuss how Obama's inactions have allowed Putin to gain a foothold in the Middle East, a debate recap, and Craig at his snarkiest best. 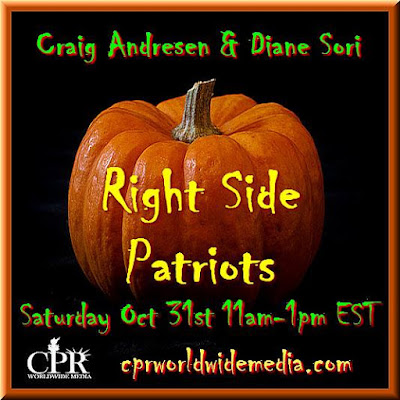