"He has (their) blood on his hands. He really does. There's no way to sugarcoat this,"Why in the world would you be sending coronavirus patients to a nursing home, where the most vulnerable population to this disease resides?"...so said a Queens, New York nursing home executive.

Why else indeed, but know that before he exposed himself as the monster that he is, he received much media praise for his response to COVID-19. Well, he did before more than 23,000 people in New York State died from COVID-19., and he did before 25% of those deaths...over 5,600 deaths...more deaths than on 911...were in the state's 613 regulated nursing homes. And it was before he callously said that older people are going to die from the virus "despite whatever you do," and before he actually told nursing homes administrators that they must accept back into their facilities patients who had tested positive for COVID-19.
Read entire article and see video here: https://thepatriotfactor.blogspot.com/2020/05/op-ed-monster-resides-in-empire-state.html
Posted by Diane Sori at 4:41 PM No comments: 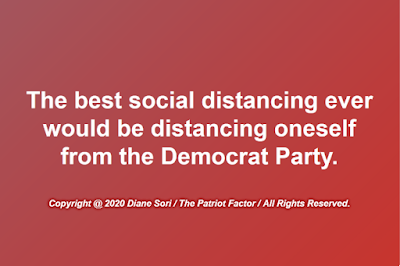 China Puts the WHO on a Pedestal and Takes Shots at the U.S.
Beth Baumann / Townhall Tipsheet

"To support the World Health Organization (WHO) is to support saving lives. I believe all countries with decency will choose to do so," Chinese State Councilor and Foreign Minister Wang Yi said during a press conference on Sunday, state-run media CGTN-TV reported.

According to Wang, the WHO's advice has been helpful to nations around the world. He took a jab at the United States and President Donald Trump for "ignoring" and "rejecting" what Tredros and his team said.

Fear Pornographer FAUCI WRONG AGAIN: “Mysterious Inflammatory Condition” in Children Is Typical Every Year in 13 of 100,000 Children in Study

Every week it some new fear meme. “Two more weeks!” “Flatten the curve.” “No masks!” “Masks!” “Millions dead!” This is the greatest political hoax in history – all to steal an election.

Another Dr. Fauci Lie Debunked – “Mysterious Inflammatory Condition” in Children Is Typical Every Year in 13 of 100,000 Children in Study

It should be clear at this point that NIAID Director Dr. Tony Fauci has been completely inaccurate with his predictions and extremely dangerous.

This one man was able to crush the greatest economy in world history — something our foreign enemies would envy.

Today, Tuesday, May 26th from 7 to 9pm EST, RIGHT SIDE PATRIOTS Craig Andresen and Diane Sori discuss 'A Monster Resides in the Empire State'; 'Flynn's Leaker Unmasked?'; and important news of the day.

Hope you can tune in to RSP Radio at: https://streamingv2.shoutcast.com/right-side-patriots
Posted by Diane Sori at 6:09 AM No comments: