Google is taking a Bloomberg inspired step toward “curbing gun violence”. Once again demonstrating the level of ignorance that is prevalent in liberal corporate settings, the software company has decided to expand their ban on firearm-related content. Breitbart reported:
According to Google Support's "Dangerous Products or Services" page, the company "[wants] to keep people safe both online and offline, so [they] won't allow the promotion of some products or services that cause damage, harm, or injury."
Right. Google (ya know, the company that tracks your every move online) is trying to keep us safe. God bless those left coast liberals who are suddenly embracing the manipulative power of big business. Of course Google seems woefully ignorant of the fact that such “dangerous” items, actually keep many people safe every day. I understand it could be chalked up to a difference in corporate culture, but I would encourage Google to promote safety and concealed carry classes if they are serious about keeping people safe offline.

The tech giant also decided that such a ban would be ineffective if utilized exclusively against firearms… Which is why they have embraced the idea of expanding their policy to include accessories, ammunition, magazines, clips, scopes, attachments, slings, et al.


Also included is a ban on ads for "any part or component that's necessary to the function of a gun or intended for attachment to a gun." This covers "gun scopes, ammunition, ammunition clips or belts."
Whew… I know I feel safer, don’t you? I mean, clearly the lack of advertising on firearm-related accessories will cut down on all those Chicago drive bys. Right? Apparently, this is the culture of California Leftists and liberal corporatism… Guns are bad. The only use for a firearm is to promote inexplicable violence and oppression. Those who own, handle, or carry firearms are merely psychopaths waiting for an excuse to unleash a wave of bloody violence at unsuspecting victims…

Well, unless we’re talking about cops, or Bloomberg’s body guards. Those guys are obviously special. The rest of you commoners, however, aren’t responsible enough to be exposed to an advertisement for a hunting scope from Cabela’s while surfing the interwebs.

So, what’s the solution? Boycott Google?

I’m generally not a fan of boycotts. Besides, Google is a pretty intuitive and helpful product. I mean, sure, I find it kinda creepy when my phone alerts me to head out for work because there’s some traffic issues (I never told it where I work, or what route I like to take… It just picked up on those details while it spied on me through my android phone). But, overall, the company has opened the web to limitless possibilities. The dissemination of information is in a renaissance never before seen in human history; and companies like Google are largely responsible for the facilitation of such an environment.

And yet, Google manages to be that neighbor who has every tool you ever need – while still being the most obnoxious human being in the cul-de-sac. He might have that reverse-thread bolt, specialty vice grips, or that silly tool used to remove oil filters… but you just can’t quite get past his Obama bumper sticker and inappropriate political jokes about John Boehner (actually, some of those are kinda funny). So the question is, how much do you really need what Google has to offer?

Google has declared a war on gun owners, the firearm industry, and related self-defense products.

Because, obviously, a defenseless population will be much safer, right? Bing, on the other hand, has no such restrictions. So, go ahead… Bing away. But don’t expect to cut Google out of your life completely.

Now, if you’ll excuse me, I need to go add the text of the Second Amendment to my automated signature in Gmail.
Posted by Diane Sori at 1:19 AM 1 comment:

Sen. Rubio gave a speech at the National Press Club addressing some of America's retirement policies and the problems we're facing in a future where a much larger percentage of the population are retirees.

Charles Blahaus, a trustee for Social Security and Medicare, wrote about this at Economics21:


Perhaps the most significant policy element in the Rubio speech was his embrace of specific reforms to stabilize Social Security’s finances. Social Security is the single largest federal program; it also faces the greatest financing shortfall of all federal trust funds including Medicare’s. Reforms to maintain Social Security solvency would improve the federal fiscal outlook dramatically as well as strengthen the foundation of most Americans’ retirement security.

Senator Rubio embraced reforms that include progressive growth of Social Security’s benefit formula and a gradual increase in future eligibility ages. These concepts receive wide enough support from Social Security experts that they are likely to be included in any bipartisan Social Security solution.

It is a measure of the public education challenge facing reformers that some bloggers and reporters thereafter questioned whether Senator Rubio’s proposals would actually shore up Social Security finances, even though there are many publicly-available analyses demonstrating that they would. The SSA chief actuary found that one version of progressive indexing would by itself eliminate over half of the program’s actuarial imbalance as well as 89 percent of its annual shortfalls over the long term. Combining this with a gradual increase in Social Security eligibility ages as the Senator proposed would be more than sufficient to maintain Social Security solvency and allow for his other proposal of payroll tax relief for working seniors.

Though the fervor for Social Security reform has mostly died down, it remains an issue that's more pressing every day. More and more Americans are retiring, and the federal government has committed an unsustainable amount of money to our retirement policies - including Social Security.

Reform is absolutely necessary, and it would be a good thing for Marco Rubio to make this a little more prominent in Americans' minds.
Posted by Diane Sori at 12:58 AM 2 comments:

WASHINGTON – Claiming its goal is to smash the “partitioning of Muslim lands by crusader powers,” the Islamic State of Iraq and al-Sham, or ISIS, has set out its goal of redrawing the map of the Middle East.

This goal is outlined in an article from its latest weekly web magazine, The Islamic State Report, a professionally designed mouthpiece meant to recruit would-be jihadist fighters from the West.
ISIS’ web magazine began in June and has just published its fifth issue. Its fourth issue talks about redrawing the map of the Middle East, and on its cover shows ISIS fighters crossing between Syria and Iraq without any sign of a demarcation between the two countries. The web magazine is published every Saturday.

The article seeks to justify creation of an Islamic caliphate to re-establish the Middle East region before it was carved up by the British and French following World War I. 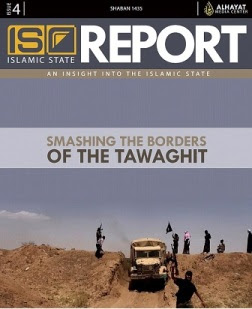 In outlining how it is reshaping the Middle East map, ISIS in said its goal is to correct an injustice that goes back to a secret arrangement between the British and French, known as the 1916 Sykes-Picot Treaty. That treaty created the countries of Syria, Lebanon, Iraq and Jordan and later contributed to Israel’s creation.

Middle East experts say some of these nation-states won’t survive in their present form, and while some will, the bottom line is the United States won’t be able to stop a process that is well underway.

Before the treaty, which went into effect following the end of World War I, those countries didn’t exist but were part of the Ottoman Empire, which was allied with Germany. The Empire went out of existence once WWI ended, closing out its reign from 1299 to 1923.

The British got territory divided into Palestine and Transjordan, from which Iraq emerged. France got Greater Syria and coastal state lands that included modern-day Lebanon and Syria.

Muslims refer to the Sykes-Picot Treaty as the source of their troubles, leading to sectarian and ethnic divisions. In creating the state of Iraq, the treaty delineated non-Arab Sunni Kurds in the north, Sunni Arab Muslims in the western and central portions of the country and Shi’ite Muslim Arabs to the south.

At the time, the British also created the modern state of Jordan out of the Transjordan region and promised the Jews a homeland and state within a state under the Balfour Declaration.

In Lebanon, the French gave the Christian Maronites status and carved out borders that gave them a majority over Sunni and Shi’ite Muslims. Syria similarly was divided, giving the Alawites and the Druze their own portions of the country and the Sunni Muslims Damascus and Aleppo. Syria, however, didn’t become a united country until World War II.

Since that time, turmoil has reined from revolts, riots and civil wars, with the various sectarian factions fighting among each other.

ISIS claims it is out to rectify these past events. However, the jihadist group still has a challenge in showing it can govern the caliphate it seeks to create, even though it has become a rallying point and sparked the imagination of disgruntled, unemployed young people to become jihadists with its dramatic military successes.

ISIS’ success also has shown just how limited U.S. influence now is in that region, as these sectarian and ethnic groups within these countries try to sort out things for themselves.