Just a Thought...
Taqiyya in Action
By: Diane Sori / The Patriot Factor

Posted by Diane Sori at 4:02 PM No comments: 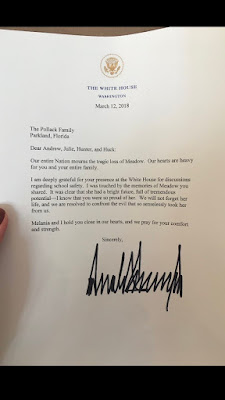 President Trump wrote a letter to the family of one of the victims of the Marjory Stoneman Douglas High School shooting, thanking them for coming to the White House a week after the shooting to attend a listening session.
The letter was posted on Twitter by Meadow Pollack’s brother, Hunter. Meadow was among the 17 killed in the February 14 shooting at the school.

“Our entire Nation mourns the tragic loss of Meadow. Our hearts are heavy for you and your entire family,” the March 12 letter says.

“I am deeply grateful for your presence at the White House for discussions regarding school safety. I was touched by the memories of Meadow you shared. It was clear that she had a bright future, full of tremendous potential—I know that you were so proud of her,” Trump wrote

“We will not forget her life, and we are resolved to confront the  evil that so senselessly took her from us,” he added.

Meadow’s father, Andrew, a Trump supporter, asked the president  last month to put an end to school shootings once and for all.

The Federal Trade Commission (FTC) confirmed Monday that it is investigating Facebook's privacy practices after a week of data sharing scandals, including sharing personal user data with the research firm Cambridge Analytica and collecting phone records from Android users.


“The FTC is firmly and fully committed to using all of its tools to protect the privacy of consumers. Foremost among these tools is enforcement action against companies that fail to honor their privacy promises, including to comply with Privacy Shield, or that engage in unfair acts that cause substantial injury to consumers in violation of the FTC Act. Companies who have settled previous FTC actions must also comply with FTC order provisions imposing privacy and data security requirements. Accordingly, the FTC takes very seriously recent press reports raising substantial concerns about the privacy practices of Facebook. Today, the FTC is confirming that it has an open non-public investigation into these practices.”

Muslim in Sweden appealed for donations for ISIS for two years on Facebook, his account was not deleted
By Robert Spencer / Jihad Watch

Facebook was probably too busy working on ways to block access to accounts that oppose jihad terror and Sharia oppression. Referrals to Jihad Watch from Facebook have dropped from over 20,000 a day in 2015 and 2016 to almost nothing — because we violate their hard-Left criteria for what is acceptable speech. This fellow, however, […]
Read in browser »

“Mateen’s father played a significant role in the FBI’s decision not to seek an indictment from the Justice Department for false statements to the FBI or obstruction of justice against Omar Mateen” during its 2013 investigation into his alleged threats, the motion stated….

The jihadists in America have succeeded in getting the FBI to work for them. For well over a decade, terror-tied groups such as Hamas-CAIR have worked hard to infiltrate and dictate counterterrorism policy at the FBI. This is a whole new level of subterfuge and treason.

This calls for a special hearings. Remember, the FBI aided and abetted the jihadis’ attack on us at our free speech event in Garland, Texas.