According to the chattering class, the “deep state,” the “intelligence community” (yeah, some of these are going to overlap), the establishment media, neocons, Trump-haters, beltway elites, and liberals of every conceivable stripe (see?), President Trump’s refusal to cold-cock Valadimir Putin for election meddling right there at the podium in Helsinki amounts to the type of treason that could very well end America, or something.

The sky is falling! Democracy is over! Muh values! (No matter the issue, liberals love to preen about “values” when it comes to Trump because it masks the sad facts about their own degenerate lives. I mean, when your “value” is “social justice,” what other value do you need, amiright?) It’s all manufactured hysteria, of course, and most normal Americans see right through the hand-wringing and pearl clutching. In fact, far from causing the destruction of America, President Trump is actually SAVING not just our country, but the entire world through his actions as president.

The world, you ask? Isn’t that being a bit melodramatic?

Put it this way. If liberals can take every new “crisis” and somehow manufacture it into a way to accuse Trump of literally *ending* the world, I should be able to write a column on how he’s saving it, right? And it’s not like I’m lacking for material either …
Read more »
Posted by Diane Sori at 9:28 AM No comments: 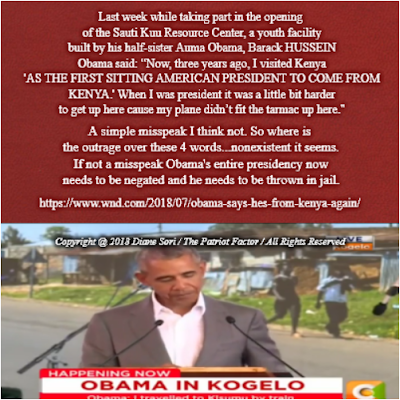 Posted by Diane Sori at 8:57 AM No comments:

Email ThisBlogThis!Share to TwitterShare to FacebookShare to Pinterest
Federal judge rules that US can’t strip citizenship from Muslim who aided al-Qaeda in Brooklyn Bridge jihad plot

“American citizenship is precious, and the government carries a heavy burden of proof when attempting to divest a naturalized citizen of his or her citizenship.” You’d think plotting jihad mass murder by destroying the Brooklyn Bridge would be enough, but no. “Judge says Pakistan-born terrorist convicted of helping Al-Qaeda can KEEP his US citizenship after […]
Read in browser »

When DOJ Inspector General Michael Horowitz released his report last month on the FBI’s investigation into Hillary Clinton’s use of a private server during her tenure as Secretary of State, he said that, although it was clear that FBI officials harbored strong anti-Trump bias, he could not find evidence that their bias affected the key decisions in the case. Well, here is your evidence, Mr. Horowitz.

Tom Fitton, founder and editor of Judicial Watch, confirmed they received documents (at 5:30 on a Saturday evening) related to the FBI’s application for the FISA warrant (and renewals) to surveil former Trump foreign policy advisor, Carter Page. Although they were heavily redacted, including entire pages, they do indeed indicate that the Steele Dossier was the “major component.” The documents can be viewed here. Fitton put out a statement Saturday night:


These documents are heavily redacted but seem to confirm the FBI and DOJ misled the courts in withholding the material information that Hillary Clinton’s campaign and the DNC were behind the “intelligence” used to persuade the courts to approve the FISA warrants that targeted the Trump team. Given this corruption, President Trump should intervene and declassify the heavily redacted material.

Read entire article here: https://gellerreport.com/2018/07/fisa-steele-dnc.html/
Posted by Diane Sori at 8:06 AM No comments: